You Are Here Home Health and Fitness ASMR Is Overwhelmingly White. Here Are Some Black Artists To Watch. 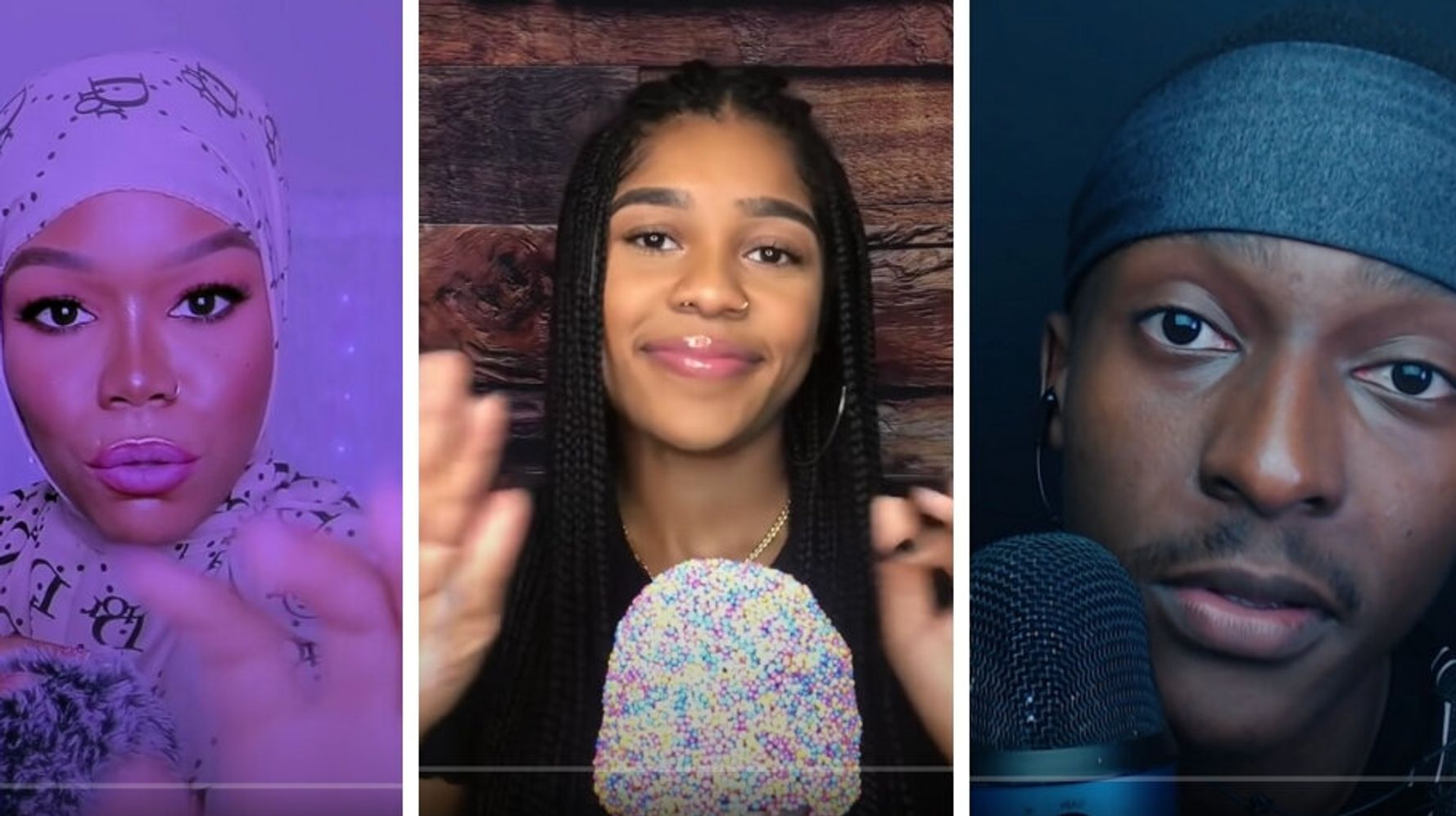 ASMR stands for autonomous sensory meridian response, a tingling sensation that occurs when some people hear soft noises, such as whispering or crisp sounds such as tapping and crinkling. These hushed, relaxing videos are wildly popular on YouTube. Many of the videos’ creators ― called ASMRtists ― locked down lucrative deals with brands in recent years, becoming their own type of influencers.

But when you click through the selection of clips on YouTube ― or peruse internet rankings of top ASMRtists, you can’t help but wonder: Where are all the Black people?

James Curtis, who goes by Darker4Serenity ASMR on YouTube, quickly noticed when he first started watching the genre that “the face” of ASMR was telegenic white or white-passing women. Nearly all the women ranking in views were attractive white women ― people such as Gentle Whispering ASMR and WhispersRed ASMR.

The ASMR creative community stayed white, at least to some extent, because of YouTube’s algorithm. The algorithm picks up what people watch and shoots out similar suggestions: in this case, more whispering white people.

That’s disheartening and discouraging if you’re a Black ASMR enthusiast looking to get into the game, Curtis said.

“Most people take on endeavors because they identify with someone else in that space, and looking like someone is the quickest and simplest way to identify with someone,” the Southern California-based YouTuber said. “It’s the same reason there are so few women in engineering or professional gaming.”

“White privilege doesn’t cease to exist on the internet, not at all.”

It certainly doesn’t help that YouTube’s comment sections are often full of racist and harassing remarks ― an issue that the platform admitted it’s trying to fix.

Samantha Gipson, an ASMR creator who goes by LatreceASMR, experienced it firsthand.

“People have called me the N-word, monkey and have threatened to cancel and report my videos just because of my skin color,” she said. “I believe that people simply seek out people that look like them on YouTube, but there is definitely is a race issue in the community, too.”

Collaborations with popular white ASMR creators could help boost Black creators’ audiences, but few of those collab videos are cross-racial.

“The best way to shine light on Black ASMRtists is collaboration,” Curtis said. “We can’t change what people are immediately attracted to or the YouTube algorithm, which is in favor of white creators as society still prefers white. But we can put Black people in the immediate way of it, via collaboration, and create that positive association and a sense of legitimacy that I believe are missing.”

While there are some confused critics in the comments ― “they seem to only have been picked because of their skin colour,” one person wrote, clearly missing the point ― the majority of the replies are supportive.

“The video was created with the intent of giving the smaller channels a spotlight to show their talent on the more ‘popular’ channels pages that are featured,” said Sharmelys Villaverde, an ASMRtist who goes by ASMR Sharm on YouTube and spearheaded the collaboration.

Still, it’s not lost on many of the popular white ASMRtists that their community has a distinct lack of melanin.

“I think we can speculate on why ASMR is so white for plenty of reasons, including the fact that YouTube tends to be a direct reflection of our society in terms of who makes it to the top,” said Gibi Klein, a popular ASMRtist and cosplayer. “White privilege doesn’t cease to exist on the internet, not at all.”

As for how to help boost Black talent, Klein said she makes a point to recommend Black ASMRtists and actively seeks out their content. That’s the best way to make sure your suggested video feed is diverse.

Given how much money there is in YouTube content creation, Klein also thinks that transparency about brand deals is important. (For instance, if a white creator sees a person of color making a similar brand deal, she should consider sharing how much she was paid to ensure that the POC is getting paid similarly or at least proportionately.)

“I have an open door whenever possible in terms of being available to answer questions about content creation, YouTube in general or especially the business side, as my husband manages sponsorships for a lot of ASMR creators,” Klein said.

Here’s a list of Black ASMRtists that I’ve been compiling for a while. Big and small. Everyone who I’ve come across. If you are / or you know any black ASMRtists who aren’t on this list, let me know! https://t.co/SjZgoToIJF https://t.co/AZybKrk8EH

Simply talking about the lack of representation in the ASMR community helps, too. Inevitably, those conversations turn to debates on whether race matters in a medium that’s largely audio. Does the skin color of the person who’s whispering “sksksk” as you nod off really make a huge difference in terms of representation?

It does, if you consider that ASMR is much more than just fuzzy mic tingles and scratching sounds.

Anecdotally, ASMR fans said that the videos cured their insomnia, helped them manage symptoms of PTSD and depression, made them feel less alone and calmed them in moments of heightened anxiety.

Given the outsized role ASMR plays in viewers’ lives, instead of asking “does race really matter here?” a better question might be: Why aren’t we watching more Black creators ― even if it means digging a little deeper to find their content?

“I think the root of this issue is how comfortable society as a whole is at accepting a lack of diversity in all media. In many aspects, for many things, whiteness has been the default.”

“I think the root of this issue is how comfortable society as a whole is at accepting a lack of diversity in all media,” said Reena Gordon, who goes by WildheartASMR. “In many aspects, for many things, whiteness has been the default.”

More often than not, the people who say, “There is no race issue here,” don’t see an issue “because they are the ‘default’ and their experience isn’t diminished or is less fulfilling because of a lack of representation,” she said.

To do her part to combat the lack of diversity, Gordon recently created a list of Black ASMRtists to follow. She’s always open to adding more names and said to contact her if you’d like to be included.

“I hope to one day streamline it and make it better, ” she said. “For now, I like to think of it as a Black sleep directory.”

While we first and foremost recommend going through Gordon’s list in its entirety, below, we spotlight some of our favorites from the roundup.

When Batala says a video is “fast and aggressive,” she’s not playing. This fan-favorite ASMRtist’s signature style includes rapid hand movements, tongue clicking and tons of nail tapping. If fast and aggressive isn’t really your thing ― some find it a little anxiety-inducing ― she also has plenty of soothing, sleepy trigger videos for relaxation.

Darker4Serenity’s specialty is mouth sounds, but he told HuffPost his favorite videos to produce are ASMR videos with strangers. (Here’s one in which he asks people to share their worst rejection stories, all while whispering.) “If you want to laugh at watching people attempt to brush a Black person’s hair or if you want to sleep to ear eating or Bible reading, I’m the ASMRtist for you!” he joked.

Come to Annura’s page for soft ambient lighting, fluffy mic play and some truly fast and aggressive triggers. Also, go to her page just to gawk at her reliably gorgeous nail art. (See above!)

True to his name, Low Growl ASMR gives Barry White a run for his money in the deep voice department. Low Growl is big into tapping, general life updates (here he is talking about what it’s like to be a teacher during COVID-19) and bedtime stories.

Samantha Gipson, aka LatreceASMR, makes comforting realistic role-plays that may trigger memories from childhood. (Who knew a video with a horrifying title such as “ASMR School Nurse Lice Check and Removal with Shampoo Treatment” could be so relaxing?)

“Many of us experienced ASMR as a child, whether it was a teacher with a soothing voice, doctor appointments or a friend playing in your hair,” Gipson told HuffPost. “That’s how I make my videos, incorporated with tingly sounds, soft hand movements and a soft voice. I make you feel like you are there with me.”

When it comes to making cool, unexpected mouth noises, no one has more finesse than Trigger Happy ASMR. Expect things such as tongue flutters, cool echo sounds, aggressive hand movements and “extremely slow and courtesy tapping.” (Anglophiles will appreciate his great British accent.)

If you haven’t gotten a proper haircut in months because of the pandemic, Trigger the Tingles’ channel is for you. With a soothing voice and cadence, Layla does ASMR role-playing that’s usually centered around hair (a big subcategory in the ASMR community): haircuts, scalp massages, shampoo and scrubs ― you name it. There are also videos that touch on mental health and soft-spoken, sisterly advice on things such as breakups.

Reena Gordon, aka WildheartASMR, has all the classic ASMR triggers on her page (hand movements with rubber gloves, tongue clicks, inaudible whispers).

But as she told HuffPost, “I also throw in my Jamaican accent and Creole to sweeten the deal!” Come for the triggers, stay for the Jamaican facts!

The Lifesaving Items You Should Always Keep In Your Car

What Happens If You Mix COVID Vaccine Doses?

The Best Foods to Eat After a Run to Kickstart Recovery

This Best Selling Supplement Will Aid in Joint Support

Can I Get A COVID Booster Shot?