Obtaining the Campaigns list from the server has failed!
Server response:
CM Ad cahger Server plugin is not active on https://legendarygroup.co/admanager/
You Are Here Home Health and Fitness What You Need To Know About COVID-19 Vaccine Mandates Right Now 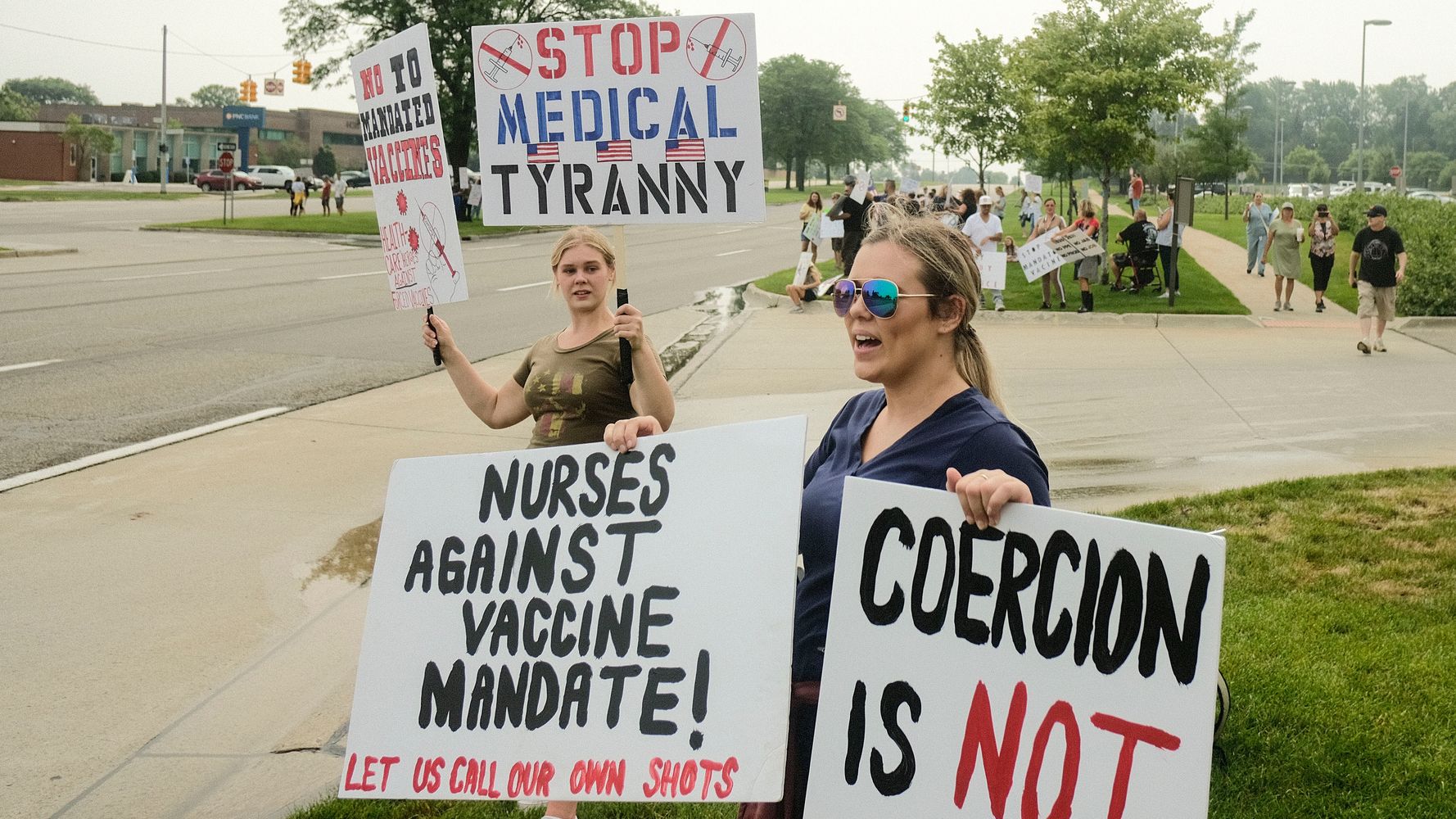 The Centers for Disease Control and Prevention announced Tuesday that people in certain high-risk places across the country are advised to mask up indoors once again, a distressing sign that a full recovery from the pandemic is still, frustratingly, out of reach.

Less than half the American population is fully vaccinated, and the virus — especially the delta variant, which now accounts for most new cases — is now largely affecting the unvaccinated. Naturally, one question keeps arising: What if we required people to get vaccinated?

President Joe Biden announced one such mandate for people who work for the federal government on Thursday, when he also directed military leaders to develop a plan to fully vaccinate service members. Support for mandates appears to be plentiful: A group of nearly 60 major medical groups, including the American Medical Association, came out in favor of vaccinating all health care workers this week. Governors in New York and California announced new vaccination requirements for state employees and health care workers, offering them a choice: get vaccinated or face regular testing. More states and municipalities are doing the same.

Will we see other places shortly follow suit? Here’s what you need to know.

There’s nothing particularly new about vaccine mandates. General George Washington ordered his troops to be inoculated against smallpox in 1777, writing, “Should the disorder infect the Army … we should have more to dread from it, than from the Sword of the Enemy.” Educational institutions ― from preschools up to universities ― also have a long history of requiring staff and students to be inoculated against various diseases, and it is legal for them to do so.

After all, no one has the right to threaten the health of anybody else, right? That’s the ethical argument favored by Georgetown University Law Professor Lawrence O. Gostin, who also directs the O’Neill Institute for National and Global Health Law. “Nobody has the right to go unmasked and unvaccinated in a crowded workspace or classroom and potentially expose another person to a deadly disease,” he told HuffPost, noting that “America has a long tradition of restricting freedoms to protect others.”

But Gostin does not necessarily trust the courts to get it right.

“You’d have to be nuts to have faith in the court system in America,” he said with a laugh. “It’s become so politicized.”

But so far, courts have come down on the side of COVID-19 vaccine mandates, and there is good reason to believe they will continue to do so.

Last month, a Texas judge threw out a lawsuit against Houston Methodist Hospital ― which was itself established during the last major epidemic a century ago ― over a requirement that staff get their shots. “This is not coercion,” the judge wrote in her opinion. “Methodist is trying to do their business of saving lives without giving them the COVID-19 virus.” A federal judge also tossed a suit against Indiana University that sought to fight its COVID-19 vaccination requireement.

In the past, the Supreme Court has twice upheld the right to mandate vaccines: Once in 1905, when Massachusetts officials wanted to impose a fine for skirting its smallpox vaccine mandate, and once more in 1922, when it determined a Texas public school system could deny admission to an unvaccinated pupil. In both cases, the interest of public health won out against individual freedoms, making for sound precedent. The Equal Employment Opportunity Commission has given its own thumbs-up to vaccine mandates, provided they make reasonable accommodations for people with disabilities.

Allison K. Hoffman, a law professor and health policy expert at the University of Pennsylvania, told HuffPost that COVID-19 vaccine mandates currently stand on “pretty solid legal ground,” although she hypothesized that the courts could decide that certain employers have a stronger claim to protecting the health of the public than others.

Offering people a choice ― vaccinate or get tested ― also makes the rules more accommodating. Gostin said the testing requirements are like “nudges,” gently nosing you in the direction of getting the vaccine so you don’t have to keep bothering with regular testing.

Why haven’t we seen sweeping vaccine mandates yet?

Some believe there is one major factor at play: the Food and Drug Administration’s full approval.

While anyone can go and get a Pfizer, Moderna, or Johnson & Johnson shot right now across America, the drugs are being distributed by way of Emergency Use Authorizations from the FDA, meaning that the agency has studied their safety and efficacy but wants to evaluate additional data before giving them formal approval. The agency is currently fast-tracking approval of the Pfizer vaccine, with a goal of completing its review by January (although that could come this fall). Once a COVID-19 vaccine is fully approved, the theory goes, more vaccine mandates will come into play.

In the Houston Methodist case, plaintiffs cited the EUA as a reason to strike down the vaccine mandate, claiming that it was “the first time in the history of the United States” that an employer required its employees to get an “experimental” medical treatment. A New Mexico detention center employee made a similar argument.

“There’s this perception among the population, including employers, that this is a so-called ‘experimental’ vaccine,” Gostin said. And polling shows that people who are hesitant to get the shot commonly cite the idea that the drugs were created so quickly. However, the underlying science that made them possible has been in development for many years, and vaccine manufacturers were aided by unprecedented levels of government cash and a large pool of volunteers, allowing them to collect the data required by the FDA much more quickly than normal. The FDA then studied that data to ensure its accuracy.

Still, full FDA approval may calm nerves. As Monica Gandhi, an infectious disease physician at the University of California, told Science magazine, “It means something to people for it to be approved” — even if we already have a very good understanding of how well the vaccines work.

Andy Slavitt, the Biden administration’s former senior adviser on COVID-19, told NBC News last week that once the drugs get full FDA approval, “Everything should be on the table.”

Where might we see vaccine mandates and what are the possible hurdles to them?

Beyond employment, vaccination status is likely to be relevant for activities people want to do outside of work. New York City’s Madison Square Garden is already telling would-be concert-goers and sports fans that they’ll need to show proof of vaccination or a recent negative COVID-19 test to get in. In France and Germany ― both countries with relatively vaccine-skeptical populations ― life is harder for people who haven’t gotten their shots.

“I think that everything will be on the table at the level of municipalities, states, employers, venues [and] government agencies,” Slavitt told NBC News. On Saturday, Dr. Carlos del Rio, executive associate dean of the Emory School of Medicine and a professor of infectious diseases, echoed that sentiment while speaking to CNN, predicting that Americans will see “many businesses” require vaccination. At least one survey supports that view.

In a sort-of backwards case, Norwegian Cruise Line is currently suing the state of Florida for the right to require passengers to show proof of vaccination; Florida is one of many states aiming to restrict any entity from requiring COVID-19 shots. It remains to be seen how such laws will hold up in court.

Presumably because case counts are rising again ― or perhaps because that fact also depresses the stock market ― the last week has unleashed a tidal wave of corporate chatter about mandates. Google, for example, announced Wednesday that it will require workers to get vaccinated in order to return to the company’s offices. The billionaire Ken Langone, who sits on the board of New York University’s Langone Medical Center, has also vowed to mandate vaccination.

“I can guarantee you, all the places I’m involved in, if you don’t get vaccinated you will get fired,” Langone told CNBC on Wednesday.

Such a hard push may lead some people to simply leave their jobs. At Houston Methodist, more than 150 staffers were either fired or resigned after a judge dismissed their lawsuit. Hoffman said that she suspects many employers are wary of alienating people in a tight labor market.

“I think what they’re balancing is having to keep a safe workplace with keeping a workforce,” she said. Hoffman worried that simply enacting vaccine mandates may lead to even more resistance, whereas community outreach and education programs might have better results.

“The goal, at the end of the day, is to get as many as many people vaccinated as possible. And I think that there’s a lot of presumption that mandates are the right way to do that, and they may not be,” Hoffman said.

Another hurdle is technological. In parts of Europe, informal vaccine requirements are aided by QR codes, but across the Atlantic, the Biden administration has shied away from providing any national guidance on digital systems to verify vaccine status.

It’s difficult to predict how unvaccinated Americans will react to being told they need a COVID vaccine to go to work, to school, a concert, or fly on a plane. (Airlines, for their part, have kept quiet when it comes to passengers’ vaccination status.)

Polling indicates that most Americans who have not already gotten a vaccine do not want one. But some people have also said that they might get one if they are told they have to in order to live their lives among the vaccinated. And that might be enough to tip the scales against the virus.

What Is Compassion Fatigue? Here Are The Signs You’re Experiencing It.

Best Summer Wines of 2022, According to Sommeliers

If Walking Is Keeping You Sane Right Now, These Funny Tweets Are For You