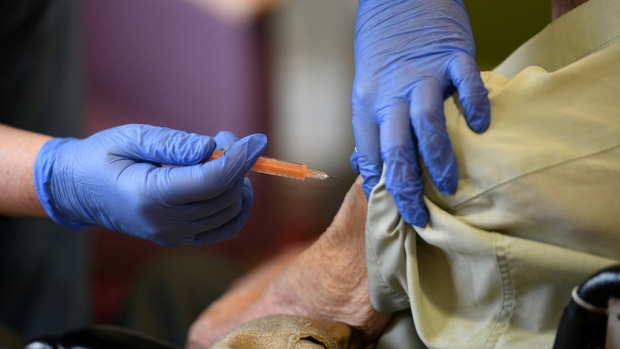 TORONTO — A push to administer thousands of COVID-19 vaccines before they expire has shortened the recommended dosing interval for some Ontarians, but one expert says that any difference in protection is likely negligible.

The province announced last week that the first cohort of Ontarians who received the Oxford-AstraZeneca shot in March were now eligible to schedule second jabs — marking 10 weeks from their first shot.

A recent study out of the United Kingdom found that lengthening AstraZeneca’s dosing interval to 12 weeks or more was more effective against COVID-19 than administering the doses six weeks apart.

The findings seemed to back Canada’s recommended strategy to delay second doses in order to administer more first doses. Health Canada says the gap between shots can stretch 4 to 12 weeks, while the National Advisory Committee on Immunization has recommended an extended interval of up to 16 weeks.

Dr. Allison McGeer, a professor in laboratory medicine and pathobiology at the University of Toronto, says taking a second vaccine dose at 10 weeks instead of 12 likely won’t impact its effectiveness.

“(But) personally, from my experience with vaccines, I’m with the province on this one.

“I do not think that your (immune) response is going to be different at 10 weeks than it is at 12 weeks.”

While some early AstraZeneca recipients may be wondering if they’re getting shortchanged by getting a second dose earlier, McGeer said vaccine schedules are typically “invented.”

Ontario administered nearly one million doses of the AstraZeneca vaccine before halting first shots earlier this month due to what it said was an increased risk of blood clots.

The jab has been associated with vaccine-induced immune thrombotic thrombocytopenia (VITT), an extremely rare blood clotting condition that while treatable, can also be fatal.

The chances of acquiring VITT from a second shot of AstraZeneca are believed to be more rare than with the first dose, though McGeer said an exact estimate of risk is still unknown.

Those who received AstraZeneca for their first dose may be eligible for an mRNA vaccine from Pfizer-BioNTech or Moderna for their second shot, but the National Advisory Committee on Immunization is still waiting for efficacy data from a U.K. trial examining that mixed-dosing strategy.

McGeer said waiting for a potential mRNA dose could also put people at risk of contracting COVID-19 in the meantime because they’re not as fully protected from the virus.

Dr. Zain Chagla, an infectious disease expert in Hamilton, says that with a steady, increased supply of mRNA vaccines coming in, it may be time for Canada to re-assess the amount of doses it needs right now.

He says some future shipments could be more useful in other countries that don’t have equitable access to the same inoculations.

“Does that mean we don’t vaccinate our population? No … but we do have to make difficult decisions about what the next three months of our vaccine plan looks like,” Chagla said. “Where do we set the cutoff to say: ‘OK, we’re not going to accept any more AstraZeneca into Canada … where is the cut off for Johnson & Johnson?

“Do we need this as part of our vaccine strategy or can we give that back to the world?”

This report by The Canadian Press was first published May 26, 2021.