Every year on Oct. 22, former House of Commons security guard Maurice Montpetit makes a solemn pilgrimage to the National War Memorial before heading to Parliament Hill.

He stands at the spot where Cpl. Nathan Cirillo, 24, was gunned down in 2014 before the sentry’s killer, armed with a rifle and a long knife, raced up the Hill and stormed Centre Block.

That day, Montpetit spent hours locked down in the antechamber and lobbies outside the House of Commons, comforting the MPs and others hiding there. Sometimes Montpetit carried a handgun, but on that day he was unarmed.

“There were MPs who were scared. An MP had her baby with her. Some MPs wanted to get out through windows and construction scaffoldings. I kept telling them, ‘We don’t know what is outside. Stay inside,'” he recalled six years later.

Confusion reigned. At one point, Montpetit heard over his radio that there could be as many as 13 gunmen on the building’s roof.

The fallout was long-lasting.

“For three years, I comforted people. There wasn’t a day that went by that I didn’t talk about the shooting.”

Eventually, that took its toll on Montpetit. One morning in November 2017, more than three years after the attack, everything came to a crashing halt.

“Usually, I would have gone for coffee, stopped at the gym, but I did not do any of these things. I went to my locker to get ready. It took me about three hours to get dressed,” Montpetit recalled. The intense fatigue he suddenly felt was tinged with terror.

“I was afraid I would see something coming out of a corner. I felt that I was totally out of control. I finished my day and then I cried, because I knew I wasn’t coming back the next day.”

Radio-Canada has learned that out of the approximately 30 House of Commons security guards on duty when the shooting occurred, at least 13 have since suffered serious psychological problems. One has taken his own life.

Montpetit said he wishes all the guards had been convened for a debrief following the attack. Instead, he said he returned to work the next day “as if nothing had happened.”

‘The Hill is a bad place for me now’

While returning regularly to the scene of the shooting has been an important aspect of Montpetit’s therapy, his former colleague Louis Létourneau can’t bring himself to go back.

“I try to avoid Parliament Hill,” the Gatineau resident said. “My psychologist is in Ottawa. Technically, it would be shorter to drive near Parliament Hill. But I make a detour. The Hill is a bad place for me now.”

I emptied my cartridge. Fifteen bullets. I didn’t give him a chance to shoot back at me.– Louis Létourneau, retired Parliament Hill security guard

On Oct. 22, 2014, Létourneau was standing in the Hall of Honour, between Centre Block’s main entrance and the Library of Parliament, when he heard a boom. He turned his head to see the assailant at the top of the stairs, rifle in hand.

“I said to myself, ‘There is no way you’re going to stop me from seeing my kids tonight,'” Létourneau said. “He didn’t stop running. I emptied my cartridge. Fifteen bullets. I didn’t give him a chance to shoot back at me.”

He reloaded and shot twice more. Bullets from Létourneau’s gun were among the 31 that struck the attacker. Létourneau was later decorated with the Star of Courage by the former governor general for his part in that day.

“The first gunshot, when he enters the main door, and probably the end of the event, when I see him on the ground with the blood coming out — those are the images that always come back.”

Like Montpetit, Létourneau felt fatigued, but in his case it happened about two months after the shooting.

“I would be at work, and as soon as I had a 30-minute break, I would go to the constables’ room and take a power nap. That’s something that had never happened to me before. I could do 13-, 15-, 16-hour days without having to lie down.”

Létourneau’s demeanour took a dark turn. “I would blow up for no reason,” he said. He first left his job in 2015, one year after the shooting. He tried to return in stages the following year, but it didn’t work out and he left again.

He still has difficulty concentrating and suffers bouts of depression, but said the anxiety is the worst symptom. “Anxiety is the toughest thing. It’s like a ball in here,” Létourneau said, pointing to his chest. “It’s a pressure that is there, that stays there, no matter what you do or what you’re thinking about.”

According to the president of the Union of Officers of the Parliamentary Protective Service, Létourneau and Montpetit are hardly alone.

“The great majority of officers in the Parliamentary Precinct buildings on duty that day have suffered at different levels from the events,” said Roch Lapensée.

That includes the guard who took his own life a little over three years after the attack. According to the man’s sister, he was never the same after the events of Oct. 22, 2014.

Radio-Canada has interviewed several guards and supervisors, and has identified at least 13 House of Commons security guards who suffered serious mental health problems. Every interviewee agreed the way they were treated after the attack only contributed to their stress.

Eight months after the attack, the House of Commons and Senate security services, which were in charge of security inside the Parliament Buildings, and the RCMP unit that was in charge of security on the Hill were merged into the new Parliamentary Protective Service (PPS). Management of this new service’s operational matters was handed over to the RCMP.

“The guys felt like they had been shoved aside,” Létourneau said. “‘You did a good job, but now we’re the ones in charge.'”

Security guards who had never carried a weapon suddenly had to undergo firearms training. The new “protection officers” were expected to perform a job similar to that of RCMP officers, but for less pay.

In 2017, the PPS reprimanded guards who wore hats with the word “respect” as a sign of protest.

“We went from heroes to zeros,” said Jean-Louis Franchi, another former security guard who was on duty the day of the shooting, and who has also suffered from psychological problems.

“When there is a suicide amongst your security guards, you’d think that as a boss you would ask yourself questions. The employer will tell you it offered psychological support to the employees, but where is the moral support, the respect? The guys did heroic acts and you reprimand them because they are asking for better salaries and respect?”

In a statement to Radio-Canada, PPS wrote: “We take mental health issues very seriously. We have initiated a series of mental health and wellness activities for all our staff. Our goal is to make sure our staff have access to the proper mental health support they need.”

The labour dispute lasted until the end of 2019, when the Federal Public Sector Labour Relations and Employment Board granted the officers a wage increase.

Létourneau said psychological help was offered on the evening of the shooting to the small group of guards who had been directly involved, but he believes their employer should have done a better job watching for mental problems surfacing long afterward.

In his case, it came down to colleagues telling him he didn’t seem well and recommending he seek help. 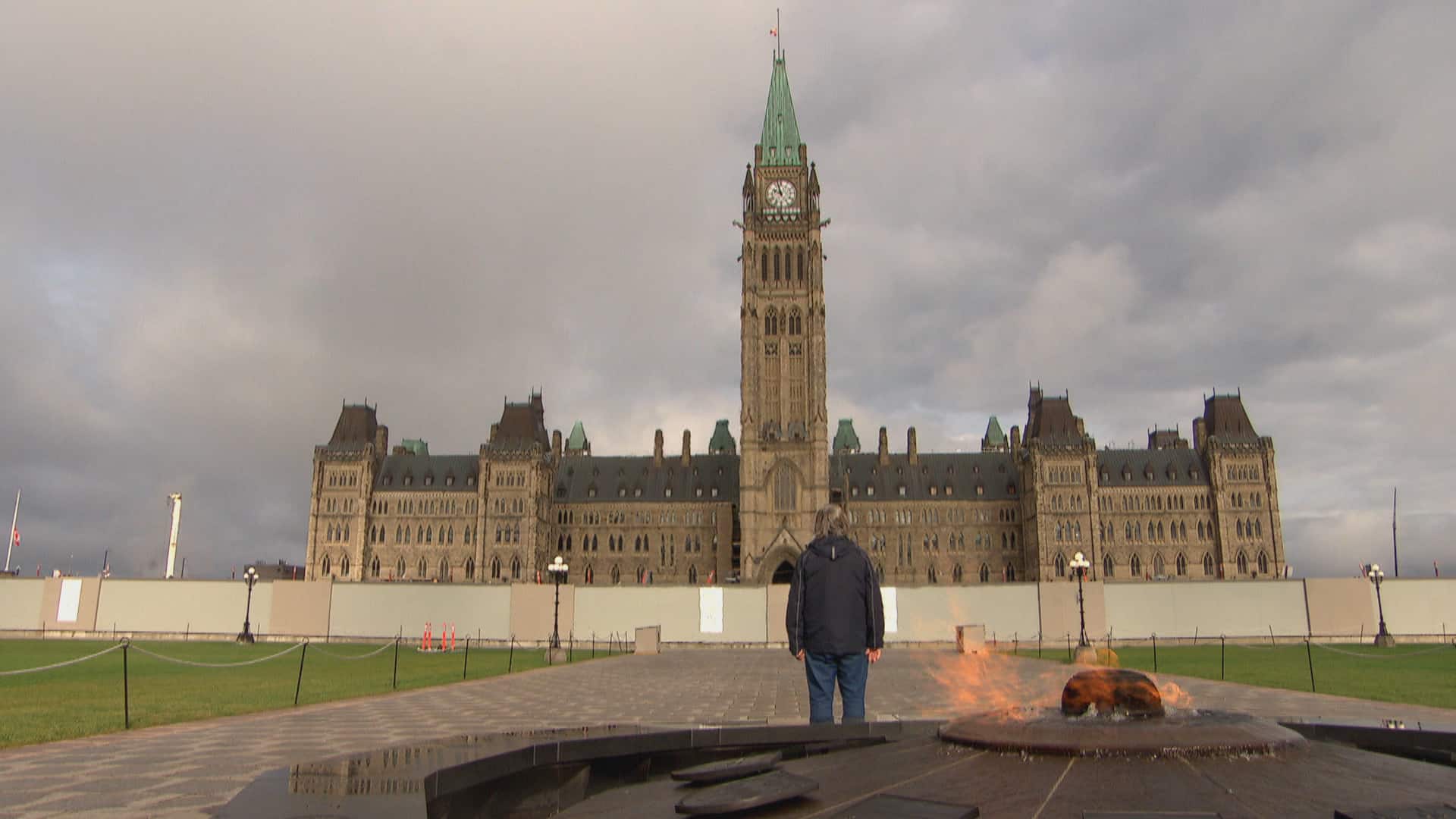 Oct. 22 remains a painful anniversary for Létourneau and Montpetit, but they are learning to cope with the horror of that day thanks to the professional help they sought.

“It saved my life,” Létourneau said. “It’s something you have to do for yourself first, and for your family.”

“You will hit the bottom and even beyond before you go back up. It’s normal,” said Montpetit, who now tries to find peace of mind by doing what he likes best: music and camping.

Now, the two men have agreed to share their stories to encourage others who are struggling with similar issues to seek psychological help.