You Are Here Home Health News 3M strikes deal with U.S. to send masks to Canada 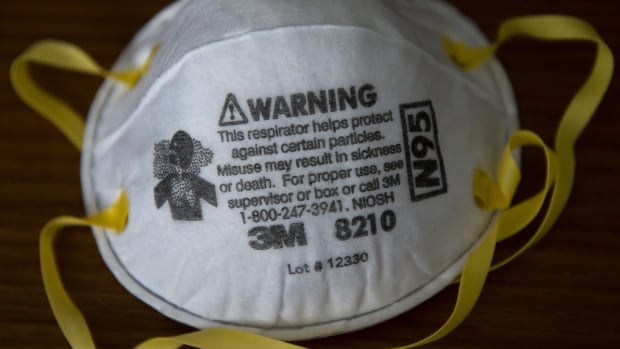 Canadian officials working behind the scenes to secure a full exemption from the Trump administration for imports of critical medical equipment say they’ve made some progress as 3M announces that it has struck a deal with the U.S. government to allow the export of N95 respirator masks to Canada.

Canadian ministers and officials have been trying to reverse the United States’ decision to invoke the Defense Production Act to force Minnesota-based 3M to prioritize orders from the U.S. government for N95 respirators at the expense of foreign orders, including some from Canada.

Earlier today, U.S. President Donald Trump said he had reached an agreement with the company and was now “very proud to be dealing with 3M.”

A statement from the company said it has struck a deal to import 166.5 million respirators into the U.S. over the next three months, primarily from its manufacturing facility in China.

“The plan will also enable 3M to continue sending U.S. produced respirators to Canada and Latin America, where 3M is the primary source of supply,” the statement said.

The company said it is ramping up production and within about a year will be able to start producing two billion respirator masks a year. The first wave of that production is expected to come online in the next three months.

It remains unclear how this deal will affect exports of other critically needed personal protection equipment, such as gowns, gloves and ventilators.

Deputy Prime Minister Chrystia Freeland, Ambassador to the United States Kirsten Hillman, Foreign Affairs Minister François-Philippe Champagne and staffers from the Prime Minister’s Office are on the case and are reaching out to U.S. Trade Representative Robert Lighthizer, Secretary of State Mike Pompeo and White House staff to settle the dispute.

Freeland said the Canadian side has reminded the American administration that medical supplies flow both ways across the border.

“That is why a win-win outcome, where both parties continue to help each other, is the very best outcome. That is the point we have been making and we had some positive conversations over the weekend and we will continue to have those conversations” Freeland told reporters during a briefing on Monday.

Ontario Premier Doug Ford said earlier today that his province has just one week’s worth of critical personal protective equipment for front-line health-care workers as it waits for more shipments.

Ford said around three million masks ordered from the U.S. have been held up by American officials, but 500,000 masks are being released today.

“We’re putting pressure on the U.S. government from all sides,” said the premier, adding those 500,000 masks “will buy us another week.”

Prime Minister Justin Trudeau acknowledged earlier today that Canada has been having problems securing critical personal protective equipment in the past few weeks — with some orders arriving with items missing, or not arriving at all.

“We have recognized over the past weeks a number of situations in which shipments coming from different countries from around the world have been delayed, haven’t arrived with as many products as we were hoping to see,” Trudeau told reporters on Monday.

WATCH: ‘Grateful for anything we can get out of the U.S.,’ Ford says

Though supplies are running low, Ontario Premier Doug Ford says he’s optimistic the disagreement with the U.S. over protective medical equipment will be resolved. 2:37

“This continues to be an ongoing problem but specifically with the United States, we are working with them to ensure that the orders Canada has placed get delivered. We expect those shipments to come.”

A spokesperson for Pompeo said the United States wants to work with Canada to “ensure the viability of international supply chains for crucial medical supplies and personnel, while also meeting the needs of regions with the most severe outbreaks.”

When asked about Ford’s statement, an official with the Department of Homeland Security said the U.S. is working to provide humanitarian assistance during the fight against COVID-19.

The United States’ move has sparked anger among leaders around the world, including some of Canada’s provincial premiers.

“To say that I’m infuriated with the recent actions of President Trump of the United States is an understatement,” said Newfoundland and Labrador Premier Dwight Ball on Sunday.

“I cannot believe for a second, in a time of crisis, that President Trump would even think about banning key medical supplies to Canada.”

SARS-CoV-2 during pregnancy not associated with complications in neonates, study finds

Patients with COVID-19 may have higher risk of kidney injury