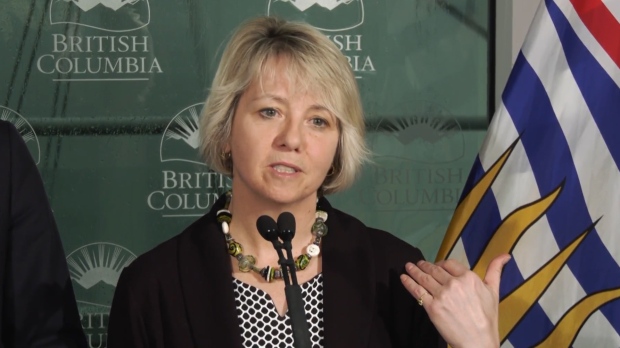 VANCOUVER — There is a new, presumptive positive case of COVID-19 in B.C. health officials announced Friday.

This marks the fifth case of COVID-19 in the province, however the most recent case still requires confirmation from the National Microbiology Lab in Winnipeg.

The update came during one of the province’s regular, bi-weekly updates with provincial health officer Dr. Bonnie Henry and Adrian Dix, minister of health.

The new patient is a woman in her 30s, Henry said during a news conference. She is currently in isolation at home and is doing well.

While she did not indicate where the woman lives specifically, Henry said she lives in the Interior Health region and that health authority is involved in monitoring her. The woman had flown from Shanghai to Vancouver, Henry said, adding that while the risk is very low for others who were on the flight, health officials are working to get a list of all passengers who were on the same plane.

Henry said they were not going release details about the flight including which airline it was with and when the plane landed.

More information is expected next week, however.

To date, almost 500 people and more than 715 samples have been tested in the province.

“The risk of spread of this virus within British Columbia remains low at this time. We continue to monitor the outbreak closely and will notify the public if the measures in B.C. change,” said a joint statement from Dix and Henry.

“The strength of our public health care system is best demonstrated when people show respect, tolerance and compassion toward one another.”

On Tuesday, Henry said officials have tested 371 samples for COVID-19, up about 50 samples from the last bi-weekly update. No new positive results had come back at that time.

The four patients whose infections have all been confirmed by the National Microbiology Lab in Winnipeg, remain at home, recovering in isolation.

Health authorities are also continuing to make daily check-ins with the people who came into close contact with the coronavirus patients prior to their diagnoses, and so far none of them have fallen ill.

Henry also said the first person who was confirmed to have COVID-19 in the province is recovering and has had their first negative test come back. Two negative tests are required, she said.

The new name of the coronavirus was announced Tuesday by the World Health Organization, and is a combination of the words “coronavirus” and “disease,” while the 19 represents the fact that the virus was first discovered in late December 2019.