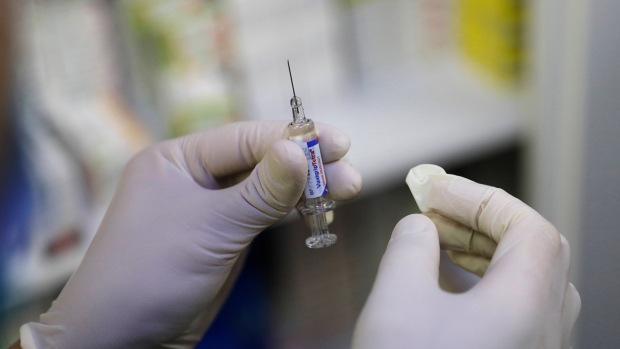 TORONTO — A Canadian biotech company played a key role in developing one of the world’s most promising vaccine candidates that could be days away from seeking emergency approval in the U.S.

Pfizer announced Wednesday that its vaccine, previously believed to be 90 per cent effective, now appears to be 95 per cent effective following more interim results. The company is preparing to formally ask the U.S. Food and Drug Administration to approve emergency use of the vaccine in the coming days.

Vancouver-based biotech company Acuitas Therapeutics contributed to the vaccine candidate by providing an important delivery technology that carries a critical but fragile part of the vaccine into human cells.

The challenge with messenger RNA technology is that it is delicate and can be broken down by the body. So Acuitas Therapeutics developed lipid nanoparticles that act as vehicles for the vaccine to help it get where it needs to be, according to Acuitas Therapeutics CEO and president Thomas Madden.

“The messenger RNA is very fragile after it’s been administered, it’s broken down very quickly in the body, and it also can’t get into our cells where it needs to be to work,” Madden told CTV’s Your Morning on Wednesday. “So we provide a delivery technology that protects the messenger RNA after it’s administered and carries it into the cells and then releases it in the cells so that it can work.”

Pfizer’s vaccine candidate, if approved, could be challenging to distribute because it needs to be stored at -75 C. Madden said this temperature condition was the most cautious approach vaccine developers could take, but further studies may identify a more convenient storage temperature.

“We don’t have the ability to do long stability studies to establish a shelf life for the vaccine at a more convenient temperature,” he said, emphasizing the importance of getting the vaccine approved quickly.

Pfizer’s update comes two days after Moderna announced that its vaccine candidate appears to be 94.5 per cent effective, according to early but incomplete analysis.

The federal government has signed deals with multiple companies, including Pfizer and Moderna, for tens of millions of doses. The approach was meant to ensure that as many Canadians as possible have access to the first vaccine once it’s available.

But before a vaccine can reach the public, it will need to be vetted by health regulators. Infectious diseases specialist Dr. Isaac Bogoch said he wouldn’t be surprised if the first vaccine roll-out programs begin in Canada sometime between January and March of 2021.

“Obviously fingers tightly crossed that it means we can see it here sooner,” he told CTV’s Your Morning.

“It still has to go through the regulatory procedure here in Canada, which means Health Canada is going to have to evaluate all the data and really look at the side effect profile, the safety profile, the efficacy profile, and really determine if this is acceptable or not.”

Dr. Anthony Fauci, director of the U.S. National Institute of Allergy and Infectious Diseases, called vaccine effectiveness above 90 per cent “just extraordinary” and expressed optimism that the U.S. could launch its own vaccine programs before the end of 2020 if a vaccine candidate receives emergency approval.

Bogoch said it’s important to understand the difference between the normal vaccine approval process and the fast-tracked process used in public health emergencies.

Pfizer studied a group of 44,000 volunteers by giving some the vaccine candidate and others dummy shots. So far 170 volunteers have been infected, and only eight volunteers who received the vaccine contracted COVID-19. Of those, one suffered serious effects of the disease.

The company estimates that it could have 50 million doses ready by the end of 2020, which would provide the necessary two shots for 25 million people. Pfizer could make up to 1.3 billion doses in 2021, enough for roughly 8 per cent of the world’s population.

Acuitas Therapeutics is a relatively small biotech company with 25 employees working out of a building at the University of British Columbia. Formed in 2009, the company specializes in creating delivery systems for nucleic acid therapeutics based on lipid nanoparticles.

With files from CTV News Vancouver and The Associated Press