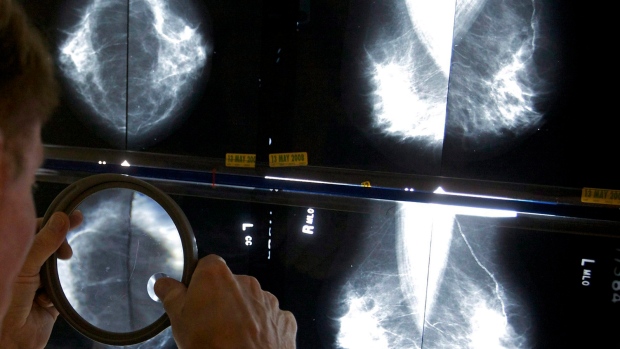 VANCOUVER — A technician holds a mesh bag full of marbles meant to represent breast tissue, pointing out a single black marble among the clear ones. The goal is to explain why a woman’s breasts are compressed during a mammogram.

“The black marble represents a cancer tissue,” she says in Punjabi. “When I put the breast on the machine and compress it with the compression paddle the cancer becomes much easier to spot.”

The BC Cancer video posted on YouTube is one of several in languages that include Cantonese, Mandarin and English, which were created to inform women about the sometimes uncomfortable procedure so they return for follow-up mammograms as needed.

Dr. Leah Smith, senior manager of surveillance at the Canadian Cancer Society, said early detection is vital when it comes to cancer, adding breast cancer is expected to be the most commonly diagnosed cancer in women this year, accounting for about one in four new cases.

Smith is co-author of a new study that says more Canadians are projected to be diagnosed with cancer in 2020 as the population ages and grows, with lung cancer still the leading cause of death.

The study, published Monday in the Canadian Medical Association Journal, says lung, breast, colon and prostate cancer are expected to account for nearly half of all new cases detected this year.

It says that while death rates for the top four cancers have decreased over the years, fatalities from pancreatic cancer have remained stable.

Overall, cancer remains the leading cause of death in Canada, with incidence and mortality rates expected to be generally higher in the eastern provinces due to risk factors such as smoking as well as differences in diagnostic practices and data collection.

“There needs to be more effort to improve uptake of existing programs, as well as to advance research, prevention, screening and treatment,” Smith said from St. John’s, N.L.

Declining rates of lung cancer, especially among men, are mostly due to improvements in smoking cessation programs, she said.

Health Canada has set the minimum age to buy tobacco products at 18, but some provinces, including British Columbia and Ontario, have set it at 19.

But Smith noted initiatives across the country are aimed at raising the minimum age to 21 to prevent cancer — an effort that succeeded in Prince Edward Island, where the increased minimum age came into effect on Sunday.

Exposure to radon in buildings is the leading cause of lung cancer among non-smokers, and the Canadian Cancer Society estimates about 3,300 deaths each year are linked to the gas. It’s odourless and tasteless and is created through the composition of naturally occurring radium in the soil that a home or other structure is built upon.

Smith said that after tobacco, excess weight is expected to replace physical inactivity to become the second-leading cause of preventable cancer in Canada by 2042.

Excess weight, associated with a body-mass index of 25 or more, is linked to at least 13 different types of cancer including post-menopausal breast cancer and colorectal, esophageal, kidney, liver, ovarian, stomach, thyroid and uterine cancers, she said.

Smith said programs such as those aimed at preventing childhood obesity are important, along with education on screening to allow for early detection and treatment.

Janette Sam, operations director for the BC Cancer breast screening program, said the agency is using social media, including the YouTube videos about mammograms, to reach women from multiple backgrounds and help them have a positive first experience.

“Hopefully, we remove some of the apprehension women have about coming for the test,” she said, adding the success of the videos developed about two years ago is expected to be assessed in the fall.

“We’re really focused on retention because quite often we know that women will come for their first screen and then a good percentage of them are less likely to return.”

The agency also has mobile units that visit various communities and Sikh temples, where women can gather with friends to learn about mammography. The hope is that they will also feel more comfortable discussing the procedure with their family doctor.

“Typically, there’s volunteers in these communities who are very interested in supporting their colleagues and their friends to go and get screened,” Sam said, adding BC Cancer, which was involved in the study, also produces booklets about breast cancer in various languages such as Farsi.

This report by The Canadian Press was first published March 2, 2020.