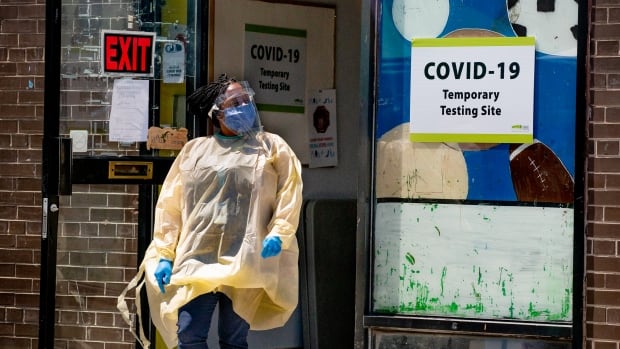 What those additional public health measures might look like and when they could take effect, Williams wouldn’t say.

“When the time is right, I’m sure the minister and premier will be forthcoming,” he said.

Asked specifically if he’s recommended closing indoor dining, Williams didn’t answer directly, saying only that he had made recommendations from the province’s public health table, which are “up to cabinet for their consideration.”

With the Thanksgiving long weekend approaching, Williams focused on the need for Ontarians to take the advice of public health officials seriously: avoiding gatherings, observing physical distancing and mask wearing.

The average age associated with COVID-19 outbreaks is growing younger, but the novel coronavirus is also spiking again in vulnerable populations, he said.

The positivity rate during this second wave is up to 2.1 per cent on average, he said, but is closer to three per cent in Toronto, Peel Region and Ottawa. Outside of those hotspots, cases are also rising in the regions of Halton, York, Durham and Simcoe.

‘It’s just the start of the curve rising up’

The number of people in Ontario hospitals with confirmed cases of COVID-19 continued its steady climb upward, up to 206 from 195. Of those, 47 are being treated in intensive care units, while 29 are on ventilators.

“Some will say those are still small numbers,” Dr. Williams said. “It’s just the start of the curve rising up.”

Ontario reported 797 new cases of COVID-19 on Thursday, the most on any single day since the outbreak began, while the province’s labs processed 48,488 tests — also a single-day record.

As has been the case in recent months, most of the new cases are concentrated in four public health units:

Other areas that saw double-digit increases include:

About 57 per cent of the newly confirmed infections are in people under 40 years old, Health Minister Christine Elliott said in a tweet. Further, 100 of today’s cases are school-related, including 51 students, 22 staff and 27 people categorized as “individuals not identified.”

A total of 415 of Ontario’s 4,828 publicly-funded schools, or about 8.6 per cent, have now reported at least one case of COVID-19 in either students or staff.

The testing record comes as the province pushes toward its goal of processing 50,000 tests daily by the middle of October, and more than 75,000 per day by mid-November.  The backlog of tests waiting to be completed currently sits at 58,118.

Ontario recently announced it would end testing for asymptomatic people at its 153 COVID-19 assessment centres, instead moving to an appointment-only model for those with symptoms of the disease. The decision was made, in part, to help labs clear the backlog of test samples, which at its highest grew to more than 92,000.

The province has now seen a total of 56,742 confirmed cases of COVID-19 since late January. About 85.1 per cent are considered resolved. Another 695 cases were marked resolved in today’s provincial report.

There are currently some 5,442 confirmed, actives cases of the illness provincewide, an increase of 98 over yesterday. About 74 per cent of those are in the Greater Toronto Area.

The developments come as provincial officials ask Ontarians to spend the upcoming Thanksgiving holiday with only people in their own household.

“I know it’s tough on everyone,” Premier Doug Ford said on Wednesday. “We’re all going to make sacrifices to stop the spread of COVID-19.”