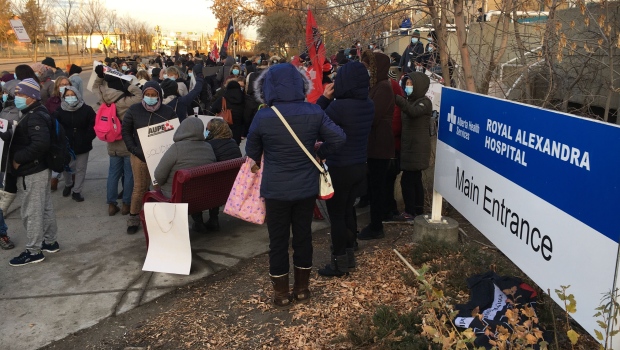 EDMONTON — Members of the Alberta Union of Provincial Employees (AUPE) walked off the job Monday morning to protest the government’s plan to contract out about 11,000 laundry and lab positions, a move AUPE calls dangerous to Alberta’s health care system

More than 100 nursing-care and support workers are participating in the wildcat strike at the Royal Alexandra Hospital in Edmonton. The union says workers at other hospitals across the province are also walking out.

CTV News has confirmed strikes at Foothills Hospital and the South Health Campus in Calgary as well.

“Shame on this government,” AUPE President Guy Smith said in Edmonton. “Nowhere in the world, every single government, every political leader across the world is thanking and celebrating the work of their health-care staff during this pandemic. Only in Alberta, during the pandemic, do they tell ya that you’re going to lose your jobs.”

On Oct. 13, Health Minister Tyler Shandro announced a plan to cut as many as 11,000 jobs. Along with contracting out laundry and lab services, the changes are expected to save the province $600 million annually.

Shandro said nurses and frontline clinical staff would not be among the layoffs during the pandemic.

The majority of jobs, about 9,700, the government said, will end up under a private employer when AHS begins to contract out services: 400 laundry workers; 2,000 lab workers; 4,000 housekeepers; and 3,000 food workers.

At the time, Smith said AUPE members would be preparing to strike in response.

Alberta Health Services said some surgeries and ambulatory clinics may need to be postponed.

AHS is enacting contingency plans to redeploy non-union staff, including managers, wherever possible to cover for missing staff. AHS is monitoring the situation closely to try to mitigate patient care interruptions.

AUPE represents more than 90,000 workers across the province, including about 58,000 health-care workers.

This is a developing story, more details to come.