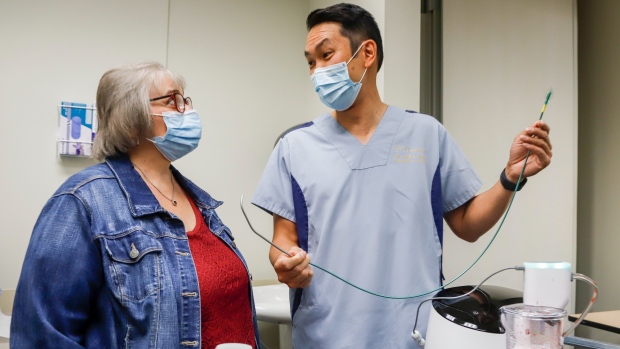 CALGARY — Alberta Health Services says a woman considered dead for 30 minutes was brought back to life by Calgary physicians using a new device for what’s believed to have been the first time in Canada.

Brenda Crowell of Calgary contracted COVID-19 earlier this year and developed a pulmonary embolism in May.

Dr. Jason Wong with the Foothills Medical Centre says his team received approval to use the device – the Indigo Lightning CAT12 – to extract the blood clot from Crowell’s lungs.

The CAT12 is a tube the size of a large drinking straw and allows medical experts to remove larger blood clots than previously able with a minimally invasive procedure.

Crowell says it’s a miracle to be alive after spending almost a month in hospital, including eight days in a medically induced coma.

She hopes her experience encourages others to get vaccinated, as it did for herself and her family.

“People say there aren’t miracles anymore, but there are because I don’t think I’d be here if it wasn’t for the touch of God,” says Crowell.

“I can’t believe what happened to me and how sick I was, how close to death I was.”

This report by The Canadian Press was first published Aug. 19, 2021.