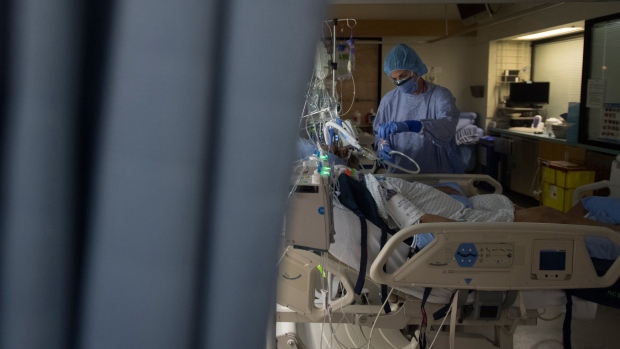 TORONTO — Canadian Broadway star Nick Cordero’s recent leg amputation due to complications from COVID-19 is an example of a constellation of things that can go wrong during severe bodily infections, say doctors.

The Hamilton-raised actor-singer’s wife, personal trainer Amanda Kloots, said his right leg was amputated last weekend in Los Angeles after blood clotting issues arose while he was being treated for the coronavirus. Cordero was in a medically induced coma on various machines to support his heart, lungs and kidneys.

While problems with organs and tissues can also unfold in other types of flu and critical illness, doctors say such cases highlight that COVID-19 can stretch far beyond a respiratory illness.

As Montreal emergency physician Dr. Abdo Shabah explains, complications can arise beyond the typical flu and respiratory symptoms due to high levels of inflammation in the lungs, which can affect the level of oxygen in the blood and its delivery.

That can put stress on the whole body and lead to issues with the heart, such as arrhythmia and unstable blood pressure, and infection in other organs including the kidneys and liver.

“The inflammation in the whole body triggered by this disease can affect the clotting path, and that is still under research,” says Shabah, a board member at the Canadian Medical Association.

“It’s very difficult to describe the clear mechanism, but we see that association with other organ failures, such as kidney failures or having other clotting factors.”

Chinese doctors were first to sound the alarm about blood clots in COVID-19 patients.

In March, Chinese heart specialists advised the American College of Cardiology to watch for clots and said certain blood tests showing a rise in clot risk might signal which patients were in greatest danger. Other reports suggested the clots can show up all over the body. But were they a cause of deterioration or an effect? And what role does treatment play in exacerbating some of the complications?

Patients with severe cases may need a ventilator to help the lungs, a dialysis machine to support the kidneys, and an extracorporeal membrane oxygenation (ECMO) machine to assist the heart and lungs. The 41-year-old Cordero was on all three at one point in his treatment.

Like any medical intervention, such aggressive support devices can also pose a risk to a patient through infection, blood clots and other issues. But generally such machines are life-saving measures and their benefits far outweigh the risks associated with them, says Shabah.

Clotting factors and organ failures are still “minimal compared to the main general aspects of really severe pulmonary failure,” says Shabah. “So respiratory failure that happens is the main thing that worries us.”

Patients with severe cases may also require high doses of certain medications, such as inotropes or vasopressors, to support the heart and control blood pressure.

“What we see sometimes with high doses of vasopressure medications, is that it sort of robs some parts of the body from blood pressure in order to supply the core organs,” says Dr. Rob Fowler of Sunnybrook Health Sciences Centre in Toronto.

“And so we see that maybe the skin, for instance, in the fingers and the toes will look like they have less blood supply and less oxygen there, because that’s in part the way some of these medications will work.”

As with seasonal influenza, patients who are more at risk of having severe COVID-19 symptoms and complications are those who are over age 65, and those with underlying health conditions and chronic diseases, which range from heart disease and high blood pressure, to diabetes, cancer, obesity and lung disease.

But Fowler says hospitals are seeing both “the original presentation” of COVID-19 infections and complications in greater numbers, which puts a bigger strain on the health-care system.

“A big thing with this whole outbreak is just the volume of patients that we will see is so much greater with COVID, because it’s affecting a population around the world that’s never seen it before, and so no one has any immunity to it,” says Fowler.

“With all of these complications, there was the first issue about running out of ventilators. But then soon after that, people began to realize we might also run out of dialysis machines, because we’re needing to use them in numbers in a short period of time that we’re not used to doing.”

Medicine used to treat such cases is also running out.

“Medications to keep people comfortable, sedated when they’re on breathing machines; medications to support blood pressure, for instance, are being used at a rate that exceeds the usual ability to supply many hospitals,” adds Fowler, who works in a critical care unit.

“And we’re seeing these almost-shortages or shortages on a daily basis because of this increase in global demand. And it’s not just ventilators — it’s all that goes along with supporting people.”

Shabah echoes Fowler’s message that this is all putting stress on the health-care system, which requires synchronicity in order to function properly, including having enough trained staff and a good supply of materials.

“If we have all the majors in place, I think we could manage it very well,” Shabah says.

“And I hope as Canadians, we will be able to get all this set for the next wave.”

–With files from The Associated Press

This report by The Canadian Press was first published April 22, 2020.