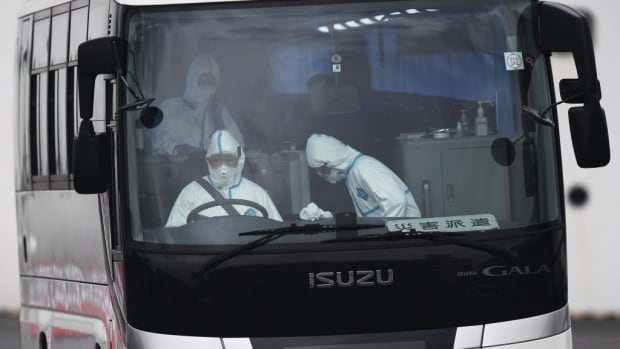 Another 67 people have tested positive for the coronavirus on the Diamond Princess cruise ship in Japan, Health Minister Katsunobu Kato said on Saturday.

The United States said earlier on Saturday it would send an aircraft to Japan to bring back U.S. passengers on the quarantined Diamond Princess, where the biggest cluster of infections outside China has occurred. About 380 Americans are on board the ship, docked in the port city of Yokohama.

The United States urged its citizens on the ship to leave, “out of an abundance of caution,” on a special flight due in Japan on Sunday, although they will face quarantine for another 14 days upon return, the U.S. embassy said in a letter.

“We understand this is frustrating and an adjustment, but these measures are consistent with the careful policies we have instituted to limit the potential spread of the disease,” the embassy said.

American passengers will first be taken to the Travis Air Force Base in California and some will continue on to Joint Base San Antonio-Lackland in Texas.

The ship owned by Carnival Corp has been quarantined since its arrival in Yokohama on Feb. 3. Of its 3,500 passengers and crew, 285 have tested positive for the infection.

Japan’s Health Ministry allowed 11 passengers to disembark on Friday. It said passengers above 80 years of age, those with underlying medical conditions and those who stayed in windowless cabins during the 14-day quarantine can move to a facility on shore.

Canadians remain on board

“The health and safety of Canadians [on the ship] is our absolute priority,” the Canadian government said on Saturday, adding that it has deployed three officials from the Public Health Agency of Canada to Japan to assess the situation.

“Officials from Global Affairs Canada are engaging with Japanese authorities to determine next steps,” it said in a statement.

“We are aware that the U.S. government is making arrangements to bring American citizens aboard the Diamond Princess to the U.S. on a voluntary basis in the coming days,” the statement said. “Canadians on board with immediate medical concerns are encouraged to consult ship personnel and medical authorities on board.”

Spencer Fehrenbacher, an American with permanent residency in Canada, speaks to CBC News on Day 12 of the coronavirus-related quarantine of the Diamond Princess in Japan. 2:27

Canadian Foreign Affairs Minister François-Philippe Champagne on Friday said that Canadian health workers are assisting in Japan after 14 Canadians contracted the novel coronavirus while on the cruise ship, where 255 Canadians were initially confined to their cabins. Those infected have been moved to Japanese health facilities, and at least three require hospitalization, Champagne said.

Meanwhile, Canada has reported an eighth presumptive case of coronavirus, British Columbia health officials said on Friday, a woman in her 30s from the B.C. Interior who recently travelled to China. There have been four confirmed cases in B.C. and three others in Ontario, according to the Public Health Agency of Canada. The risk to Canadians remains low, the agency said.

China reported 143 virus deaths and a dip in new cases Saturday while the government announced new anti-disease measures as businesses reopen following sweeping controls that idled much of the economy.

Number of new cases down in China

The number of new cases was down from the 5,090 in the previous 24-hour period after authorities changed the basis for counting patients. Health experts say that will make it harder to judge the effectiveness of anti-disease controls that have cut off most access to some major cities and closed factories and offices.

Numbers of new cases have fluctuated over the past two weeks. That fuelled optimism the disease that first emerged in December might be under control and warnings such hopes are premature.

An elderly Chinese tourist hospitalized in France has died of the coronavirus, becoming the first fatality in Europe, French Health Minister Agnès Buzyn said on Saturday. France has recorded 11 cases of the virus. Buzyn said she was informed on Friday that the 80-year-old man, who was treated at the Bichat hospital in northern Paris since Jan. 25, had died of a lung infection due to the coronavirus.

Passengers and crew aboard a cruise ship docked in Cambodia were allowed to disembark on Friday after spending two weeks at sea. Since stopping in Hong Kong on Feb. 1, the MS Westerdamn, operated by Holland America, was turned away by Japan, Taiwan, Guam, the Philippines and Thailand, before Cambodia allowed docking in the port town of Sihanoukville.

As of Friday, no passengers or crew were found to have COVID-19. However, an 83-year-old American woman who had been a passenger has tested positive for the illness in Malaysia, health authorities in that country said on Saturday.

The woman flew to Malaysia on Friday from Cambodia along with 144 others from the ship, the Malaysian health ministry said, adding that she is in stable condition. Her case brings the total number of confirmed coronavirus cases in Malaysia to 22.

In a bid to prevent the coronavirus from spreading, the Chinese government extended the New Year holiday to keep factories and offices closed, but officials have now been ordered to revive business activity as economic losses mount.

Most access to the central city of Wuhan, where the first cases were reported in December, was suspended on Jan. 23. Controls spread to cities with a total population of 60 million people. Restaurants, cinemas and other businesses were closed nationwide to prevent crowds from gathering.

Under new measures, people returning to Beijing will have to isolate themselves at home for 14 days, said a notice published by state media late Friday. It said people who fail to comply will face legal consequences but gave no details.

WHO mission to China

A WHO-led joint mission with China will start its outbreak investigation work this weekend, focusing on how the new coronavirus is spreading and its severity.

On Thursday, the number of new cases reported by authorities in Hubei province, where Wuhan is located, spiked to 15,152.

That included 13,332 that were diagnosed with doctors’ analyses and lung imaging instead of the previous standard of laboratory testing. Health authorities said the new method would facilitate earlier treatment.

Nine more temporary hospitals have opened in gymnasiums and other public buildings, with 6,960 beds in Hubei province, where Wuhan is located, the National Health Commission announced. It said they were treating 5,606 patients with mild symptoms.

Meanwhile, the ruling Communist Party is trying to restore public confidence following complaints that leaders in Wuhan, where the outbreak has hit hardest, suppressed information about the disease. The party faced similar criticism after the 2002-03 outbreak of severe acute respiratory syndrome, or SARS.

The ruling party has replaced officials in charge of Hubei and Wuhan and tried to deflect criticism by allowing state media and members of the public online to criticize local officials.

Anti-disease measures are causing losses so severe that economic forecasters have cut their outlooks for China’s growth this year.

The state-owned banking industry has provided more than 537 billion yuan ($102 billion Cdn) in credit to industries such as retail, catering and tourism that have been hurt most, according to Liang Tao, vice chairman of the China Banking and Insurance Regulatory Commission.