You Are Here Home Health News B.C. aiming to lift virtually all COVID-19 restrictions by September under new restart plan 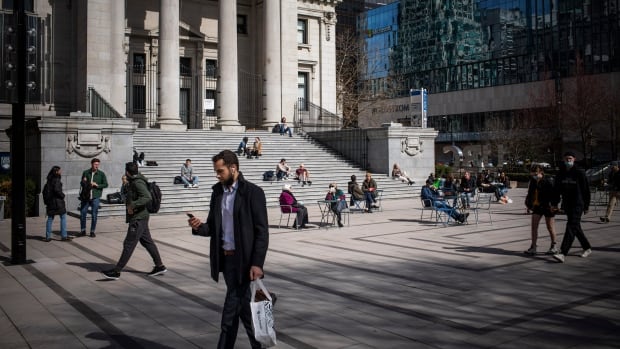 British Columbia is taking its first tentative steps back to pre-pandemic life, announcing on Tuesday a four-step reopening plan that could see people socializing normally again by September if case counts and hospitalizations decline.

The four steps outlined by the province are a roadmap through the spring and summer, paving the way for a return to family gatherings, intimate celebrations, fuller restaurants and freer travel for the first time in more than a year.

“The light we’ve been talking about for weeks and weeks now is in hand,” said Premier John Horgan at a news conference.

As of Tuesday, residents can resume dining indoors, hitting the gym for low-intensity workouts, playing outdoor sports and holding faith-based gatherings in person — though all of those activities still have to happen on a smaller scale with safety protocols in place.

In all, the following is now allowed under Step 1 of B.C.’s restart plan:

The restart plan is contingent on case counts dropping, hospitalizations declining and 70 per cent of the population getting vaccinated.

If all of those criteria are met, all travel restrictions within B.C. could be lifted in Step 2 around June 15. Travelling within Canada could be acceptable by Step 3, around July 1.

Under the province’s plan, virtually all public health orders could be removed as early as Sept. 7. Masks would be a “personal choice” and events and socializing would happen as they did before the pandemic, the plan said.

Daily case counts and active case counts in B.C. have come down by 61 and 55 per cent, respectively, since peaking last month. Hospitalizations are also down 38 per cent. Roughly 60 per cent of British Columbians over 18 have had at least one dose of vaccine.

As of Monday, the province’s rolling average of cases and active caseload were at their lowest points in six months.

Health officials acknowledged some in the community will still feel a warranted level of anxiety around COVID-19. Provincial Health Officer Dr. Bonnie Henry said some people might choose to take personal precautions as provincial rules ease, and implored everyone to continue to stay home and get tested when they’re feeling sick.

The news comes 483 days after B.C. announced its first confirmed case of the novel coronavirus. More than 142,000 people have been infected and more than 1,600 have died.