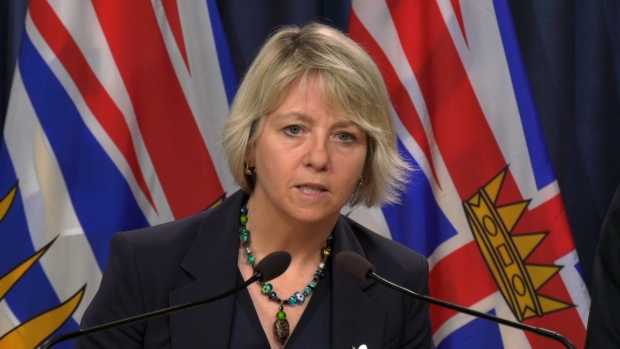 A woman in her 80s in the Vancouver area recently returned from travelling in Hong Kong and India before her tests showed a presumptive positive for the potentially deadly virus.

Provincial health officer Dr. Bonnie Henry said the woman was part of a tour group in India and officials are looking at who else was on the trip and whether they may have also been exposed.

Henry said other Canadians were on the trip and have returned to regions outside B.C. where health officials will contact them for monitoring.

“She’s had quite a severe illness and she is currently in critical condition in isolation in the ICU,” said Henry.

“In British Columbia, the risk still remains very low,” Henry said, but added the situation is changing “day by day.”

The latest case of COVID-19 in B.C. brings Canada’s total number of infections to 34.

Dix said Tuesday that the province is testing more vigorously for the new coronavirus than just about any other jurisdiction, which has resulted in greater containment.

The fourth was a woman in her 30s who developed symptoms while in isolation because of her contact with another confirmed case linked to Iran.

Health officials say that among the 12 other people in B.C. who have tested positive for the virus, four have fully recovered and three no longer have symptoms but remain in isolation.

The others are considered to be in stable condition and are also in isolation at home.

When a story is breaking, AI can help consumers identify fake news