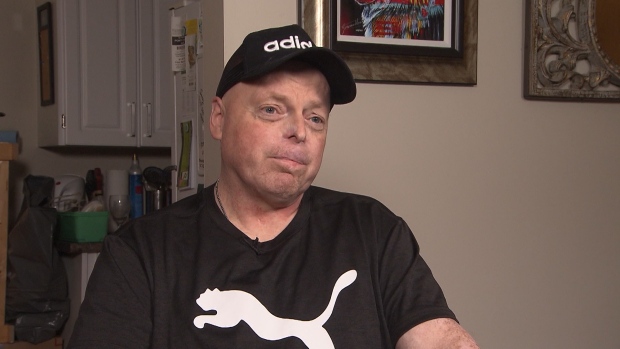 VANCOUVER — A Coquitlam, B.C. man who lost all four of his limbs is hoping to make medical history by becoming the first recipient of a double-hand transplant in Canada.

Rick Thompson had both of his hands and legs amputated in 2015 after contracting bacterial meningitis and going into septic shock.

Thompson came home from work with what he thought at the time was the flu. He remembers his feet feeling like they were on fire and barely being able to walk before collapsing near his wife.

“The next thing you know, they’re throwing him in the ambulance, and I’m at the hospital and they’re telling me he probably won’t make it through the day,” said Thompson’s wife, Rita, who was told he had a five per cent chance of survival.

He spent six weeks on life support and eventually had all four of his limbs amputated.

“The doctors gave us three hours to decide. I could either face the amputations and survive or go to palliative care and eventually pass on,” he said. “It was a decision that would save my life.”

Thompson, who had previously led an active lifestyle and raced motocross, was able to learn how to walk again without legs and do everyday tasks without hands. He also began using advanced prosthetics, but Thompson said they still didn’t compare to the real thing.

As a result, Thompson started campaigning to have a double-hand transplant, which would be the first in Canada.

“We went through medical testing, psychological testing, and agreed I was a candidate and that they would be proceeding with the surgery,” he said.

His physiatrist, Dr. Eric Hui, said he was “flabbergasted” when he first heard the news since he knows how complicated the surgery can be.

“The initial surgery itself is no small procedure,” said Hui. “To undergo a hand transplant would work to reconnecting muscles, bones, nerves, blood vessels.”

But Thompson said he’s spent time thinking about the procedure’s many risks and plans to move to London, Ont., where the surgery will take place, to wait for a donor.

“For me, the pros outweigh the cons, and if I can get 50 to 70 per cent function from transplanted hands, then I’m going to go for it,” he said.

“It’s also a gift that someone’s family is going to be willing to make that sacrifice and that decision at that time they will allow you to have their son’s, their father’s hands.”

Hand transplant surgery has only been completed once in Canada on a woman in Toronto. Maryam Zolfi’s left arm was severed below the elbow in a car accident in 2005. She was the recipient of a hand and forearm transplant in 2016 and said in an interview at the time that the procedure had given her the ability to drive, cook her own meals and do household chores again.

Thompson has set up a fundraiser to help pay for ongoing medical expenses. To contribute, click here.

COVID-19 in Indigenous communities: Over 5,000 active cases in First Nations

China, WHO should have acted faster to stop pandemic: expert panel