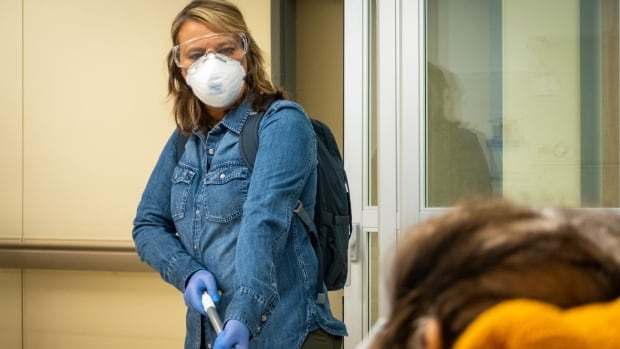 COVID-19 is showing its callousness again and again.

In the ICU at Humber River Hospital in Toronto is a man on a ventilator who’s really struggling.

When he first arrived, his breathing was so laboured there were only minutes to decide he needed to be intubated.

That’s the moment you’d want and need those you love nearby.

But this is a hospital without family members or flowers or balloons, and the absences scream “crisis.”

He is the patient of Dr. Tasleem Nimjee, and the isolation of this breaks her heart. So does the scene a few floors down in the ER.

A man arrived by ambulance from a nursing home. He was unresponsive.

In part because testing numbers are so low in Ontario, the waiting staff had no idea if he was positive for COVID-19. So they had to presume he was. That meant meticulously donning all the PPE (personal protection equipment) they could. To perform CPR on someone who may have the virus is incredibly risky.

Nimjee describes the fear of working with COVID-19 patients.

“It’s not calm when we’re going in to do these procedures; even ourselves, who are trained, our hearts are racing,” she said.

Family could not be there

Nimjee suited up and joined the team doing everything they could for the man in the ER.

WATCH | Inside the fight against COVID-19:

The National’s Adrienne Arsenault gets rare access inside a Toronto hospital during the global COVID-19 pandemic to see first-hand what staff are up against. Some of what our team saw and captured on camera may be difficult to watch. 9:56

He did not survive. And that is where an already excruciatingly tough job got tougher.

She had to connect with the man’s family, who could not be there with or for him.

Conversations that would normally happen in person, gently, now happen over the phone, health workers’ empathetic voices muffled by PPE.

‘We know that it hurts’

And so a plea from Nimjee to those who can’t be with the people who matter now — know this:

“We are doing everything that we can for the people that you love. And that it hurts us that you can’t be here with them. And we want to honour that by doing what we can in your absence. And we know that it hurts.”

That sadness is a refrain as frequent as the fear you hear in the ER. It used to be that the life-saving PPE was kept out in the open along the corridor walls. Now it’s treated like narcotics: counted, measured and rationed. Staff have no idea if they will have enough. And if they have no idea which patients have the virus then they must burn through the gear at a prudent but prolific rate.

The thoughts that there won’t be enough one day soon, or that they make a mistake and get sick, haunt those middle-of-the-night thoughts.

That she has time on an ER shift to stop and talk is an oddity of this moment.

Maybe you’ve seen the pictures of packed ER hallways in Italy or New York. Maybe you imagine the barking COVID cough echoing through those halls. That is not what you see at Humber River Hospital. The admissions are climbing, but gradually; they don’t seem to be spiking.

You can choose to see that as a very good sign. Or you can worry that it is only part of the story, that the reality may be that people are deteriorating at home and sometimes dying far from hospitals. Until the testing numbers go up dramatically, it might be hard to know how bad it is or how bad it will be.

Amid criticism over its low testing numbers, Ontario announced a “renewed testing strategy” last week, outlining its plan to increase COVID-19 testing capacity to reach 16,000 tests per day by May 6.

For now, there are spasms of calm in the ER.  And it’s strange. There are empty bays here.

Maybe there are fewer car accidents or injuries sending people to the ER. Maybe some are second-guessing whether they should go. Whatever the reason, it leaves the staff with a heavy feeling of waiting and worrying about who is coming through the door next.

Do they have the stamina for the long haul?

“Good question,” Nimjee said, pausing before being very clear that the answer is there is no choice but to say yes and mean it.

“Human beings are pretty remarkable creatures, and we are nothing if we’re not hopeful, we’re nothing if we don’t look forward…. And so when hope takes root within us, I think we have a tremendous about of courage and stamina that comes from places we didn’t expect it to come from.”

As Nimjee and her colleagues talked, their conversations were punctuated by construction sounds: Plexiglass barriers being installed at the nurses’ stations. That’s just another layer of protection from their patients, or perhaps the paramedics, or anyone at all, really, who comes into the ER.

A new day brings a new precaution. And perhaps new waves of panic. As much respect as Canadians have for health care workers now, a day in the ER shows they deserve even more.