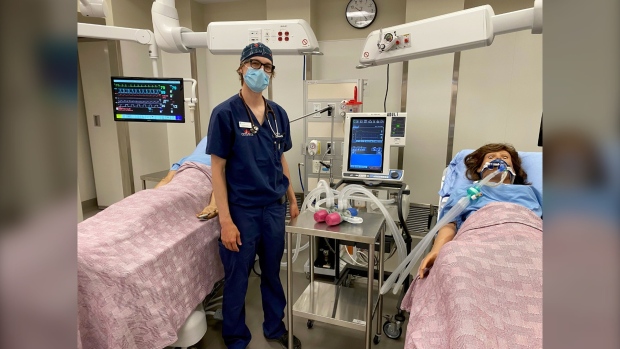 CALGARY — A Calgary company founded by an ICU physician is being recognized with an international Red Dot Design Award for creating a medical device that allows a single ventilator to be safely used by up to four patients at once.

“It’s really exciting to have our hard work recognized on an international stage particularly with such a prestigious award,” said Dr. Steven Roy, an intensive care physician and founder of Convergence Medical Sciences.

The Valence InVent Xtend connects to a ventilator and allows each patient to have different a pressure while still triggering alarms in the event of an emergency.

“It has its limitations obviously, but its main advantage is that it can be used to rapidly increase the number of patients that can be ventilated. It doesn’t require maintenance,” he said.

Early on during the pandemic, Roy says stockpiles of ventilators in the United States couldn’t be used because they hadn’t been maintained in the months before.

Ventilators can cost as much as $70,000 and Roy’s invention provides an affordable solution to expanding the number available, costing around $50 per patient.

Initially, Roy thought the idea of splitting a ventilator was unsafe and dangerous.

“But we were able to find a solution that provides a really high level of safety to the patients,” he said.

Roy used whatever free time he had during the pandemic to build a prototype in his garage and published a paper. He then collaborated with another intensive care physician and a University of Calgary engineer to create the device.

Roy patented the device and teamed up with Exergy Solutions, who brought the design to life, creating a functional 3D-printed model.

“Having a 3D printer at your disposal just lets you really design out of the box,” said Darsey Godwin, senior mechanical engineer at Exergy Solutions.

Godwin says Roy came to the company with a working prototype.

“That’s the kind of thing we specialize in, bringing those ideas to life in terms of thinking about how 3D printers work and what their limits are and how to design to optimize the outcome,” he said.

Godwin said it’s a huge honour to be recognized by the Red Dot Design Award.

The device is currently pending Health Canada licensing and approval. Roy says they are also in the process of looking into a lower cost production method.

There have been multiple situations, not just the pandemic where Roy says there has been a need for a critical supply of ventilators, including the 2017 mass shooting at a country music festival in Las Vegas.

There are two main uses for this kind of technology.

“The first is when a disaster or a pandemic hits and the system is not set up to expect it,” said Roy.

“This will allow you to rapidly expand the number of patients that can be supported while you mobilize the more traditional ventilators from other regions or move patients.”

The device would also be useful in developing countries where hospitals likely aren’t able to afford to store multiple high-end ventilators.

“This kind of device would allow people in a developing country to be able to adapt quickly to such a crisis whether it be an earthquake or a pandemic,” said Roy.

The Valence InVent Xtend device is now on display at the Red Dot Design Museum in Germany to celebrate the award for excellence in design.

It is also a finalist for the International Design Excellence Award, which will be announced in September.