You Are Here Home Health News Can we use radiation to treat Alzheimer’s? Canadian pilot study finds improved cognition after CT scans 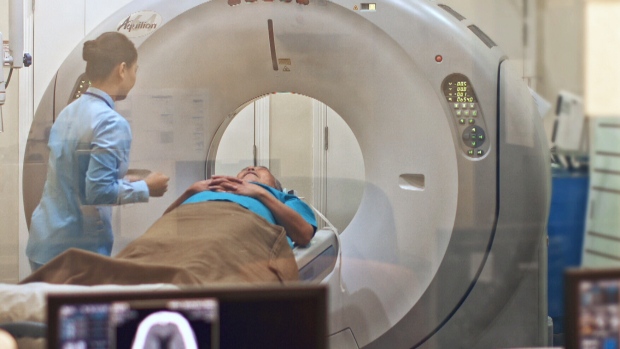 TORONTO — A CT scan is usually used to diagnose a problem, not treat it.

But Canadian scientists are using CT scans to test out a provocative theory: could low doses of radiation from the scans actually help treat Alzheimer’s?

Results from a small pilot study found that patients who received repeated doses of low-dose radiation displayed an improvement in cognition, speech and movement, with some being able to share moments with family that they hadn’t been able to in years.

Dr. Morris Freedman, head of the division of neurology at Baycrest Rotman Research Institute and one of the researchers behind the study, said the concept sounded far-fetched to him initially.

“First reaction is that ‘this does not sound like it would be a very effective treatment for Alzheimer’s disease’,” he told CTV News. “But when I looked deeper and looked at the background for this suggestion, I thought that it was worth doing a small pilot, to see if there was any effect.”

In what is believed to a be a world first, researchers in the clinical pilot study gave four seniors who had severe Alzheimer’s disease three treatments of low-dose radiation over a period of six weeks.

The amount of radiation in each dose was no more than a person would receive in a clinical scan.

Three of the four patients improved after just one dose, with families reporting increased alertness, mobility and mood. The fourth patient, who saw no changes, was the oldest included in the study, at 90 years old. The others were all in their 80s.

Among those who improved, one man was able to speak to his granddaughter on the phone and remember her name, read aloud signs that were posted on the wall, and clap and sing along at a concert. Another patient was described in the study as having detailed conversations with her family about her past.

“She cried a few times,” the study stated. “When asked whether she was in pain or upset, she replied, “No, I’m very happy.””

“Improvement was in the interaction, in the recognition,” Freedman explained. “One family member said that when a son came into the room [before this treatment], the patient wouldn’t respond, wouldn’t acknowledge that the person was there.

And after the radiation, they did.”

Some 747,000 Canadians are living with Alzheimer’s disease or another dementia,a progressive brain disease with no cure.

Because there is no cure, treatments focus on restoring some functioning in order to improve the quality of life for patients suffering from Alzheimer’s.

However, the vast number of treatment drugs for the disease have failed.

Freedman noted that the patients they looked at in the study, which was run in collaboration with Sunnybrook Health Sciences, were experiencing “very severe” Alzheimer’s.

“They had advanced Alzheimer’s disease, and any kind of improvement is significant, especially the kinds of improvements that translate into an awareness of family members, interaction, bringing back memories, bringing back behaviours that were there before — these things are very important,” Freedman said. “And it really reflects on their quality of life. So I think that this is quite significant.”

Another person who found the results exciting is Tammy, whose 87-year old father Allan was part of the study.

Tammy, who asked us not to use her last name, recorded a video of her father before treatment, and another afterwards, showing the sudden and dramatic improvements.

“I got him to clap his hands,” Tammy said. “He was more responsive, with yeses and no’s.”

A big moment for her was hearing her father address her with more recognition than he had in a very long time.

“I can’t put it into words, it was really like a miracle,” she said. “He said ‘you came to see me’. I haven’t heard him speak in I can’t tell you how long it was.”

Having that moment with her father was incredibly important to her.

“It was really just, aside from the day that my kids were born, just one of the most beautiful days I’ve ever had,” Tammy said.

Despite animal research and case reports where patients with Alzheimer’s improved after CT scan exposures, many remain sceptical, according to Jerry Cuttler, lead author of the Baycrest-Sunnybrook study and a nuclear engineer who has previously published several case reports following the progress of one patient with Alzheimer’s who received radiation.

The controversy stems from the fact that radiation is “generally accepted” as a cause of DNA mutations and something that increases the risk of cancer, according to the study itself.

The radiation dose in CT scans is low — not a risk to the patients — but researchers believe it triggers the body to somehow repair damage in the brain.

The mechanisms that may be involved are not fully understood, which is why more studies are needed, scientists say.

“Radiation is the kind of thing that in a low dose may do a very different effect than in a high dose,” Freedman said. “In a low dose, that might actually be stimulating protective mechanisms in the brain — in a high dose, it may be causing harm.”

Cuttler has long advocated for more investigation into the use of radiation for Alzheimer’s patients, and now medical professionals such as Freedman are seeing enough potential to merit further studies.

“If you had asked me five years ago, whether I thought it would help Alzheimer’s disease, I probably would have said, I don’t think so,” Freedman said.

“And here I am talking about the results of our pilot study, where it looks like it could be a potential treatment for Alzheimer’s disease.”

In Cuttler’s previous case study, a woman in her 80s experienced such an improvement after receiving CT scans that she was able to be moved from hospice care to long-term care for around a year after her treatment starting in 2015.

The goal in this new pilot study was to see if those results could be replicated.

“Numerous neurological disorders, including Alzheimer’s disease, are thought to be caused in part by oxidative stress that damages all cells, including those in the brain,” Cuttler explained in a press release. “We have natural protection systems to combat the damage, but they become less effective as we get older. Each dose of radiation stimulates our natural protection systems to work harder — to produce more antioxidants that prevent oxidative damage, to repair more DNA damage and to destroy more mutated cells.”

Because this study was so limited in scope and size, researchers believe more work needs to be done before we can know definitely if this strategy works.

“I think that we should do this study again with a larger number of people,” Freedman said. “We should have a [control] group, where there’s the real radiation treatment group, where there isn’t, and really see what the effectiveness of this treatment is. This would require funding. But that would be the next thing to do.”

“The nice thing about this is the treatment works quickly, it see results later that day or the next day,” Cuttler said. “And so, if we can get organized, properly planning treatments, we should be able to get meaningful scientific results.”

If funding and support can be found, this could be the start of a new method to treat dementia and Alzheimer’s patients.