You Are Here Home Health News Canada could see 60,000 COVID-19 cases a day by end of year if contact rates increase: PHAC 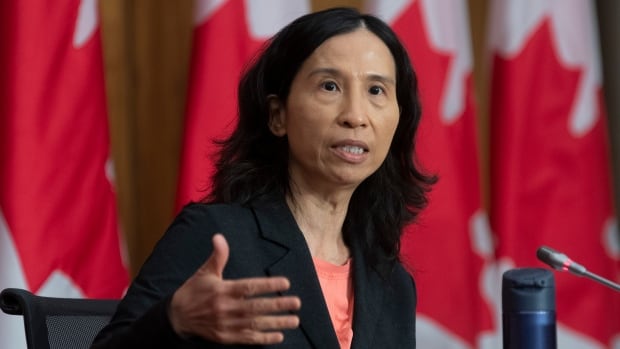 New infections of COVID-19 could reach 60,000 a day by the end of December if Canadians increase their current level of contact with other people, according to modelling charts prepared by the the Public Health Agency of Canada and seen by CBC News.

According to the new modelling — which is to be released tomorrow —  that number could be cut to 20,000 a day if Canadians maintain their current number of personal contacts.

But to drive that number under 10,000 cases a day by the end of the year, Canadians would need to limit their interactions to essential activities while maintaining physical distancing and adhering to other public health guidelines.

Tam will hold a news conference at 9 a.m. ET Friday to formally offer detailed projections on potential infections and deaths from the novel coronavirus.

Trudeau will also address Canadians Friday about the worsening situation from outside Rideau Cottage, returning to the doorstop press conferences that characterized the early days of the pandemic.

The modelling predicts that the number of COVID-19 deaths could rise from the current level of just over 11,100 to just more than 12,100 by the end of the month if Canadians maintain their current level of contact with other people.

The modelling says that there are more outbreaks now, those outbreaks are larger — more than 50 cases each — and they are affecting long-term care homes.

It also says that Indigenous communities and schools are also seeing rising caseloads and that the situation is set to get worse in all regions except the Atlantic provinces and parts of the North unless action is taken.

After the meeting, Conservative Leader Erin O’Toole released a statement criticizing the Liberal government’s response to the pandemic.

“What struck me was that 11 months after news about the spread of COVID-19 emerged, after thousands of lives and millions of jobs have been lost, and hundreds of billions of dollars has been added to the national debt, we as a country are worse off than we were at the start of the pandemic,” he said.

“We are in this position because the government failed to give Canadians the ability to rapidly and frequently test for COVID-19, has failed to tell Canadians how they plan to deliver a vaccine and failed to be transparent with Canadians about what COVID-19 related information they are using to make decisions that affect lives and jobs.”

O’Toole said the government must deliver a plan to test, trace and isolate those who are infected, because shutting down the economy is “simply not a solution.”

The national snapshot comes as Manitoba, now dealing with the highest per capita daily COVID-19 case numbers among Canadian provinces, is set to enact new orders effective Friday to limit the spread of the virus.

The public health orders will forbid people from having anyone inside their home who doesn’t live there, with limited exceptions, and prohibit businesses from selling non-essential items in stores. Large retailers are to restrict capacity at any given time to 25 per cent of their normal limit or a maximum of 250 people, whichever is lower.

“These measures will have to be tough in the hardest hit areas,” he said. “We have some difficult but necessary decisions to make.”