Almost a quarter of Canadians experience heartburn on a daily basis, according to the Canadian Society of Intestinal Research. (CBC)

The common heartburn medication Pepcid is in short supply across Canada, and experts say it’s a direct result of the recent international recall of Zantac.

Zantac, or ranitidine, was recalled in the U.S. and Canada in October after a potentially cancer-causing chemical was found at low levels in the drug.

Now CBC News has learned that Pepcid, also known as famotidine, a possible replacement for Zantac, is facing shortages that could last several months.

Barry Power, a spokesperson for the Canadian Pharmacists Association, said it’s what’s known as a domino shortage — where an unavailable drug causes a shortfall in a similar medication after demand skyrockets.

“I think that the manufacturer has just tapped out all the reserves and it’s all a result of the ranitidine recall that we saw in the fall.” 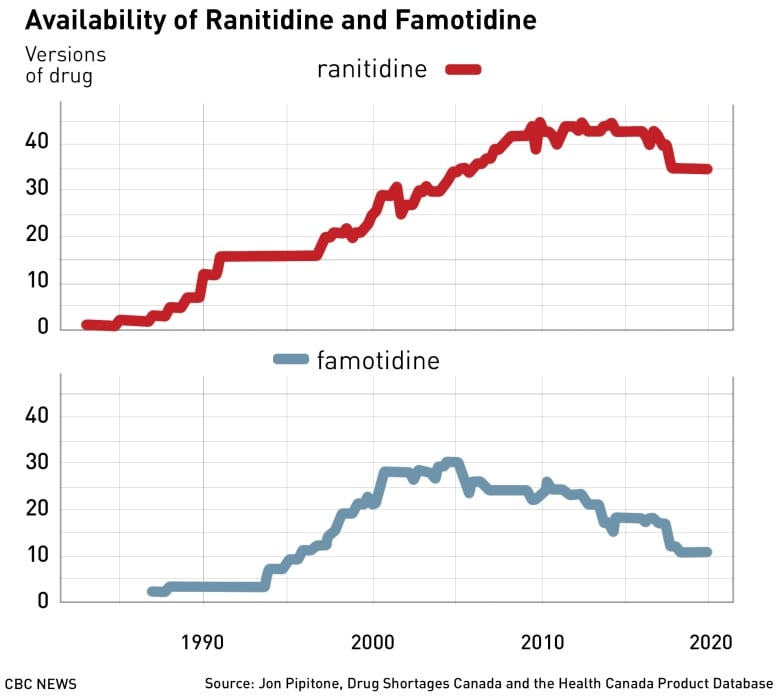 He said the generic versions of famotidine, an over-the-counter drug, are also affected.

“I would expect that if they aren’t currently in short supply, they will be soon.”

Power says he has spoken with pharmacists across the country who have been told the medication is on backorder until March.

Several versions of the drug have faced shortages since October, while others have been discontinued altogether, according to Drug Shortages Canada, a third-party website put in place by Health Canada in 2017 for pharmaceutical companies to report shortfalls.

‘Not at all surprising’

Almost a quarter of Canadians experience heartburn on a daily basis, according to the Canadian Society of Intestinal Research, a non-profit organization that funds research and seeks to increase public awareness about gastrointestinal diseases and disorders.

“A lot of us have experienced heartburn, and especially if you’re getting it chronically, the discomfort of it and how it affects your sleep can be pretty serious,” said Mina Tadrous, a pharmacist and pharmacy researcher at Women’s College Hospital in Toronto.

“These are drugs that are really important to the treatment of gastric disorders.”

These types of domino shortages are not at all surprising, said Dr. Jacalyn Duffin, a medical historian and drug shortages expert at Queen’s University.

“They have occurred multiple times in the recent past, especially when a popular drug, or the more popular drug, suddenly disappears for one reason or another,” she said.

“Then there’s pressure on the replacement to be used … and companies just can’t foresee that kind of increase, so they will run out of stock.”

She said Pepcid may not get as much attention as recent high-profile shortages of life-saving drugs such as EpiPens or the childhood leukemia drug vincristine, but it can make a huge difference in the quality of life of patients. 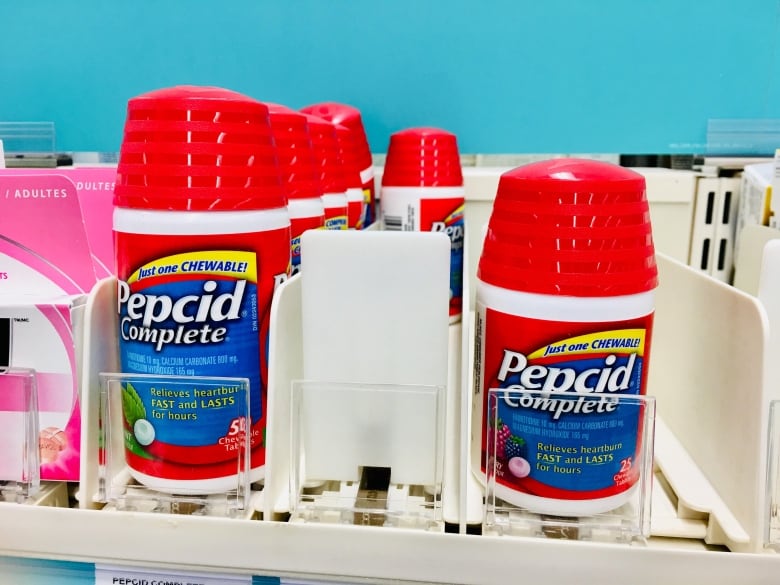 While drugs like Pepcid can be beneficial for the treatment of gastric disorders, research shows they can be harmful if used over long periods of time.  (CBC)

Power said the shortage wasn’t entirely unexpected to the Canadian Pharmacists Association, but the organization was hoping the Zantac recall would be short lived.

“I think the best thing to do would be to check with your pharmacist, work with them, work with your physician or nurse practitioner and figure out an alternate that works,” he said.

“Some people will be able to go to some non-prescription products like Tums or Gaviscon, and some people won’t. It’s going to take a little bit of finagling and figuring out what works for you and what doesn’t work for you.”

Tadrous said that while drugs like ranitidine and famotidine can be beneficial for the treatment of gastric disorders, research shows they can be harmful if used over long periods of time.

“Chronic acid suppression is not really a great thing for everybody and it may actually be associated with some risks,” he said.

“So there’s some silver lining to all of this … it might actually be a great opportunity to discuss if you should still continue to be taking it.”

Tadrous said famotidine helps to reduce acid in the stomach, which is different from other treatments like Tums, Rolaids, or Gaviscon that work after the onset of heartburn or acid reflux.

The only good news, he said, is that pharmacists don’t anticipate the famotidine shortage will be long-term.

“But again, it highlights the fact that when drug shortages do occur, they’re not just for the drug itself, but they can have a rippling effect across the system,” he said.

“This is a really important issue that continues being monitored and we need a system that reacts a little bit better to these.”