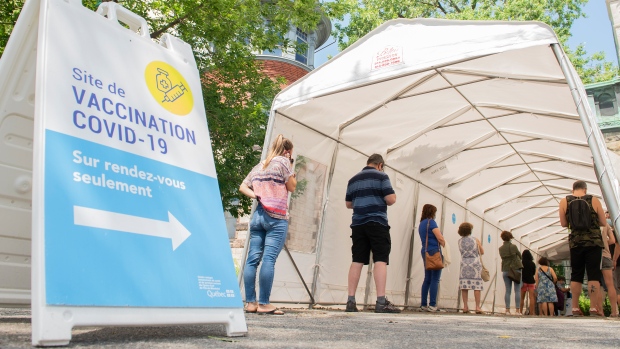 TORONTO — Canada has hit a major milestone with 20 per cent of the eligible population now fully vaccinated, a target government officials have said was needed before the country could proceed with the easing of COVID-19 health restrictions.

According to data collected by CTVNews.ca, 20 per cent of eligible Canadians — those 12 years and older — are now fully vaccinated, and nearly 75 per cent of the eligible population has received at least one dose of a COVID-19 vaccine.

Federal modelling data released on April 23 suggested that if 75 per cent of eligible Canadians had at least one dose of a COVID-19 vaccine, and 20 per cent had two, provinces could safely begin easing restrictions without infections overwhelming hospitals again.

The modelling suggested that when 75 per cent of the eligible population is fully vaccinated, provinces and territories could also begin loosening personal measures inclusing physical distancing and wearing face masks.

On Friday, Prime Minister Justin Trudeau doubled down on these targets and maintained that Canada will need to meet the COVID-19 vaccine target of 75 per cent of the total population with a first dose and 20 per cent with two doses before the federal government lifts restrictions at the Canada-U.S. border.

However, chief public health officer Dr. Theresa Tam said previous federal modelling did not take into account the highly contagious Delta variant, which she says has surged by 66 per cent over the past week.

“The Delta variant is now in all provinces and at least one of our territories,” Tam said at a press briefing on Friday.

“Of course, as with all coronavirus cases, we may not know every single case that has occurred in Canada, hence my warning of precaution and the need to get two doses of vaccine into as many people as possible,” she added.

According to data tracked by CTVNews.ca, Canada added another 859 new COVID-19 cases on Saturday, bringing the country’s number of total active cases to 12,362.

With files from The Canadian Press.