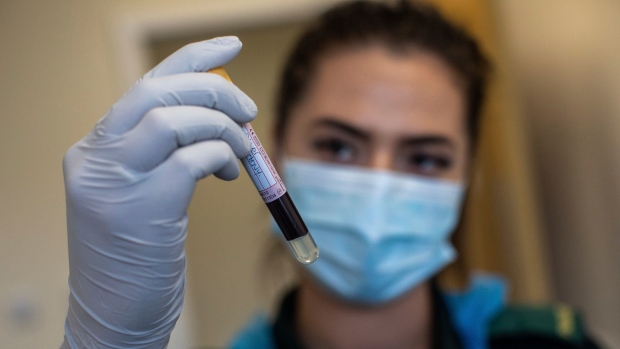 TORONTO — COVID-19 antibody tests that deliver a result on the spot are unreliable enough that they should stop being used immediately, according to new Canadian-led research.

The research, which was published Wednesday in The BMJ, involved a review of all known studies about the effectiveness of the antibody tests.

Finding dependable information was not easy. The researchers ended up with 40 studies to look over, 70 per cent of which came from China. Most of the studies were found to have been designed in a way that could create a bias in the results, and about half had not been peer-reviewed.

Still, the researchers say the studies were enough for them to reach one clear conclusion: there are “major weaknesses” in the existing evidence supporting the use of blood tests that do not process their samples in laboratory settings.

“The evidence does not support the continued use of existing point-of-care serological tests for COVID-19,” they wrote.

Serological tests are used to determine whether a person has developed antibodies against COVID-19, which would suggest that they have already fought off the disease once and are theoretically immune to a second infection.

They can also be used to diagnose active cases of COVID-19, although the medical standard for that is to use molecular tests, which require lab processing, making them more expensive and with longer wait times before results are provided.

The increasing rollout of the serological tests has led to the idea of “immunity passports,” where antibody test results could be used by governments to track which citizens have and have not developed the antibodies.

Although this idea might sound promising – allowing those who have already had COVID-19 to live their lives with limited restrictions while those who have not can remain in isolation – health authorities including the World Health Organization and Canada’s chief public health officer have been more negative, arguing that immunity passports should not be considered until there is more evidence of how long the antibodies last.

There are other objections as well, ranging from privacy concerns to potential discrimination to the possibility that some people may intentionally infect themselves in order to develop immunity.

The new research pours even more cold water on the idea, finding that the serological tests have relatively high error rates. These errors can take the form of false positives, where the disease is said to be found in someone who does not have it, or false negatives, where an infected person’s antibodies do not show up in the results.

The researchers found that the studied serological tests fared relatively well when it came to avoiding false positives, with this happening between 0.3 per cent and 3.4 per cent of the time.

False negatives were a much bigger problem, with some tests failing to detect COVID-19 antibodies in up to 34 per cent of all those tested who had been infected.

The tests that presented the most false negatives were those of the lateral flow immunoassay (LFIA) variety – the type being considered for use in immunity passports because its lack of a need for lab processing makes it quicker and cheaper than the alternatives.

In the U.S., the Centers for Disease Control and Prevention have warned that antibody tests can deliver false results up to 50 per cent of the time.

“Overall, the poor performance of existing serological tests for COVID-19 raises questions about the utility of using such methods for medical decision making,” they wrote.

“While the scientific community should be lauded for the pace at which novel serological tests have been developed, this review underscores the need for high quality clinical studies to evaluate these tools.”