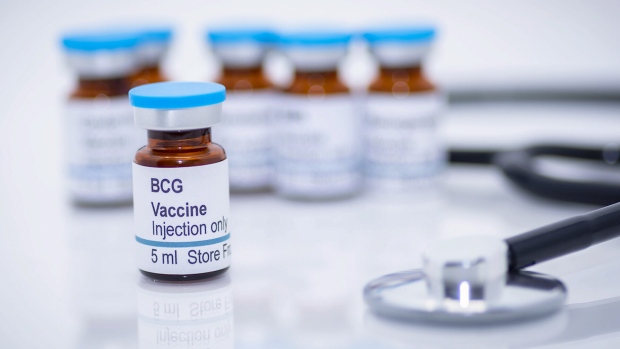 TORONTO — Researchers in Canada are hoping a century-old vaccine designed to treat tuberculosis can become the key to fighting off a COVID-19 infection.

The University Health Network in Toronto announced on Monday that it has begun the first Canadian trial of the Bacillus Calmette–Guerin (BCG) vaccine on more than 3,600 front-line workers in the area, including medical staff, paramedics, police officers and firefighters.

“We felt that this first line was clearly the kind of group of people that we would try to protect given the increased exposure,” Dr. Alexandre Zlotta, a researcher at the University Health Network, told CTV News.

“We hope, of course, that the vaccinated individuals will have less infections… (and) protect themselves but ultimately also protect their loved ones.”

“Many studies have been performed in the past where it was shown that vaccinated people were more resistant against viral infections,” Zlotta said. “What has happened is that people have realized that people who got the vaccine against tuberculosis had their immune system boosted to the point that potentially they could fight off infections which are completely unrelated.”

The vaccine being used for this study is a genetically modified version of the original BCG vaccine made in Germany. Participants will be given either the vaccine or a placebo and will be monitored over the next seven months during the second wave of COVID-19 in Canada.

Sean O’Connell, who’s been a firefighter in Toronto for the past 18 years, was among the first participants to receive an injection late last week.

“If this vaccine is effective, it’ll allow me and hopefully other people to be confident that by taking this vaccine, it might not cure the disease, but it’ll definitely lessen the effects on people and their lives,” he said.

There are currently at least a dozen similar trials internationally, including in Australia, Europe and Mexico.

One study out of Greece found that the BCG vaccine led to 80 per cent fewer serious viral respiratory infections in the following year after being administered. The study was completed prior to the COVID-19 pandemic, however.

Dr. Madhukar Pai, director of the McGill International Tuberculosis Centre at McGill University, believes one of the key questions to be answered is whether the BCG vaccine has a non-specific impact on the coronavirus, even if it’s not 100 per cent successful.

“In some ways, we know that it’s safe because millions of people have received it,” he said. “Even at 50 per cent protective, it’s like a mask, you add it to the list of repertoire of things we are all trying to do.”

There are plenty of reasons to be hopeful about the vaccine as well. Researchers say it could be implemented widely in a timely manner as it is cheap and already in use around the world.

“The turnaround time to get this vaccine from the trial to having it readily available for people is significantly shorter than what we’ve been hearing about,” said Dr. Shariq Haider, an infectious disease specialist at McMaster University.

Still, Pai remains somewhat cautious about the effectiveness of the vaccine, given how widely used it is in India and Brazil, where cases have skyrocketed.

According to Johns Hopkins University, India (6.6 million cases) and Brazil (4.9 million cases) have the second and third most confirmed COVID-19 cases in the world, respectively. Nearly 250,000 people have died in both countries combined.

“We should all be skeptical because we know (COVID-19 is) a graveyard of drugs and vaccines right now,” Pai said. “We started off with hydroxychloroquine, now we know it doesn’t work. We tried antiretroviral drugs for HIV, doesn’t work and every time we think something works, medicine teaches us a really humbling lesson.”

Researchers are also urging people not to take the vaccine thinking it will help until they have more data on the matter.

Results from the international studies are expected by the end of 2020, but the University Health Network study isn’t expected to be released until the spring of 2021.