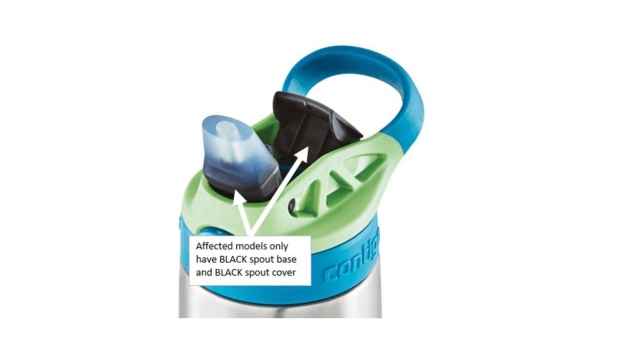 TORONTO — Contigo has announced another recall for children’s water bottles due to a choking hazard, reporting additional incidents with the replacement lids provided in a previous recall six months ago for the same issue.

The U.S. Consumer Product Safety Commission (CPSC) issued the alert Wednesday, saying the hazard is “the water bottle’s clear silicone spout” that can detach and pose a choking hazard to children.

The alert specifies that only bottles with a black spout cover and black spout base are affected by the recall, and that includes replacement lids sent out in August 2019 after the initial recall.

The bottles come in three sizes: 13 ounce, 14 ounce and 20 ounce. They have ‘Contigo’ printed on the rim and along the front near the bottom of the bottle and may have been sold individually or as part of a two or three-pack.

The bottles were sold at retailers such as Costco, Walmart, Target as well as online from April 2018 to February 2020, the recall states.

Contigo has received a total of 427 reports of the spout detaching, including 27 spouts found in children’s mouths.

CTVNews.ca has contacted Health Canada, which currently does not have an updated recall on its website, to ask about risks to Canadian consumers.