You Are Here Home Health News Coronavirus: What’s happening in Canada and around the world on Feb. 22

The United States on Monday crossed the staggering milestone of 500,000 COVID-19 deaths just over a year since the coronavirus pandemic claimed its first known U.S. victim in Santa Clara County, Calif.

In a proclamation honouring the dead, U.S. President Joe Biden ordered the U.S. flag to be flown at half-staff on public buildings and grounds until sunset on Feb. 26.

“On this solemn occasion, we reflect on their loss and on their loved ones left behind,” Biden said in the proclamation. “We, as a Nation, must remember them so we can begin to heal, to unite, and find purpose as one nation to defeat this pandemic.”

Bells tolled at the National Cathedral in Washington to honour the lives lost — ringing 500 times to symbolize the 500,000 deaths.

“As we acknowledge the scale of this mass death in America, remember each person and the life they lived,” Biden said in a sombre speech at the White House after the bells sounded.

“The son who called his mom every night just to check in. The father, the daughter who lit up his world. The best friend who was always there. The nurse who made her patients want to live.”

A tally maintained by Johns Hopkins University put the number of recorded COVID-19 cases in the U.S. at more than 28.1 million as of Monday afternoon, with a death toll of more than 500,000, although daily cases and hospitalizations have fallen to the lowest level since before the Thanksgiving and Christmas holidays.

About 19 per cent of total global coronavirus deaths have occurred in the United States, an outsized figure given that the nation accounts for just four per cent of the world’s population.

In 2020, the virus has taken a full year off the average life expectancy in the United States, the biggest decline since the Second World War.

The U.S. House of Representatives Budget Committee on Monday approved legislation with $1.9 trillion US in new coronavirus relief, advancing a top priority of President Biden.

The full House, which has a slim Democratic majority, hopes to pass the bill later this week. 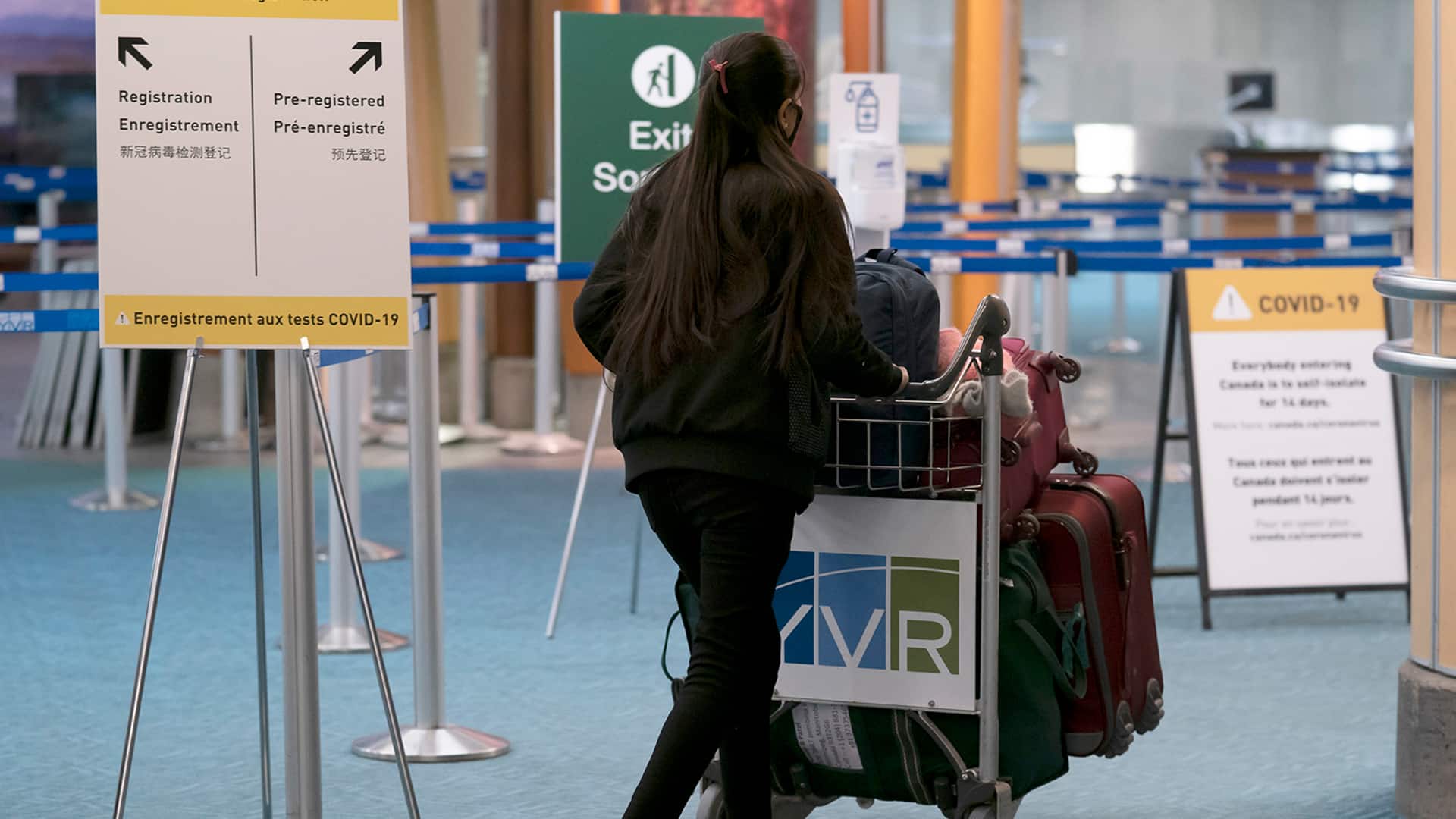 Some Canadian travellers rushed back home on Sunday to avoid new quarantine rules, while those who plan to return after the new requirements take effect say they’ve been met with an aggravating system for booking approved hotels for quarantine stays. 2:38

Canada has administered more than 1.5 million vaccine doses, according to CBC News tabulations.

Ontario on Monday reported 1,058 new cases of COVID-19 and 11 additional deaths. Hospitalizations of COVID-19 patients stood at 646, with 280 people in intensive care units.

One of Ontario’s long-standing COVID-19 hot spots returns to the province’s colour-coded system of pandemic restrictions while a stay-at-home order remains in effect for three others. Businesses in York Region are allowed to reopen as the public health unit returns to the second-most restrictive red level of public health precautions.

WATCH | Nova Scotia moves into next stage of vaccine rollout: 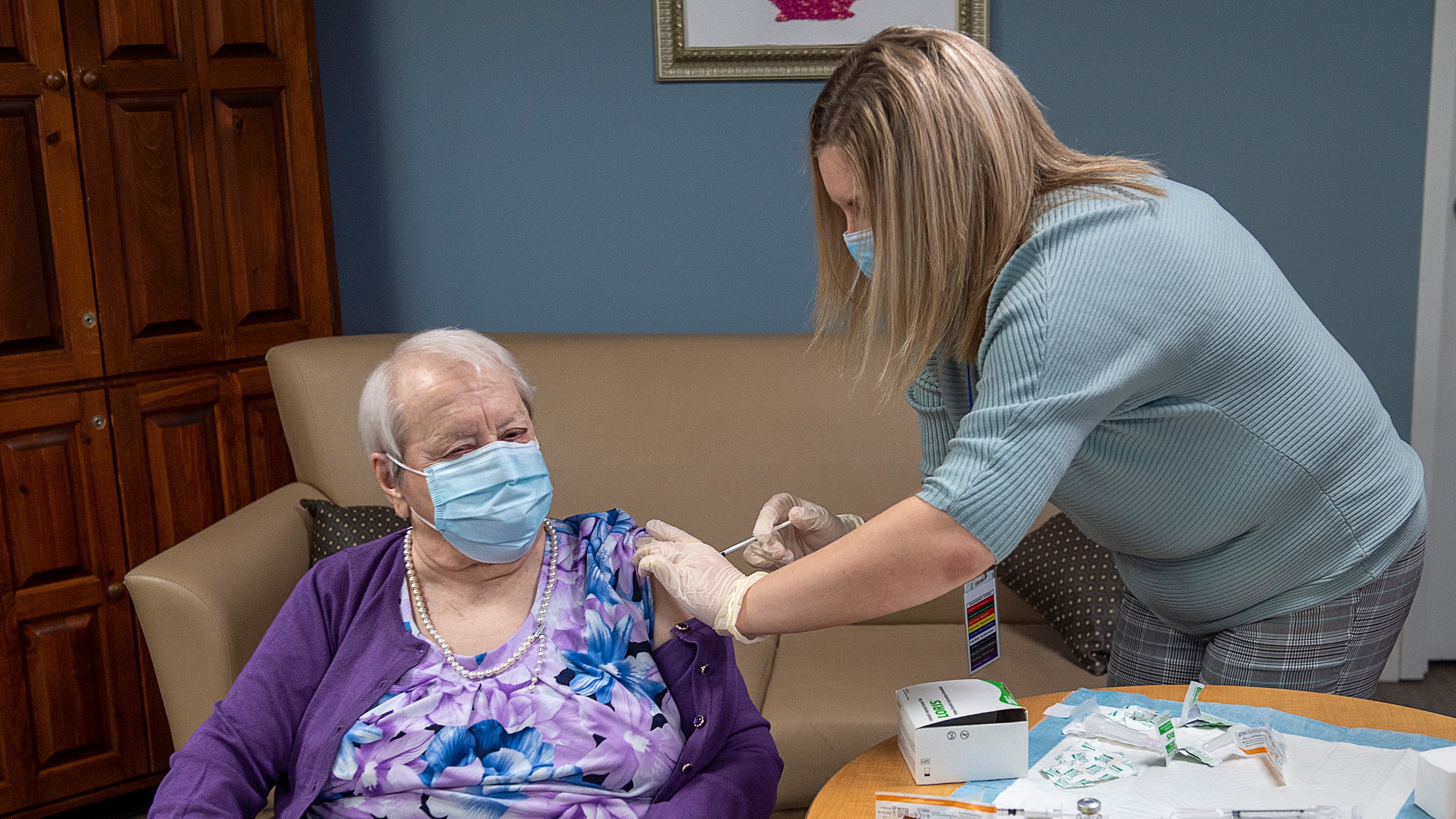 Nova Scotia is beginning mass coronavirus vaccinations in prototype clinics for residents 80 years and older and those in the Millbrook First Nation community today, in advance of a much larger rollout. 5:36

Non-essential retailers and restaurants can welcome customers back, with capacity limits and physical distancing in place. York has long logged some of Ontario’s highest COVID-19 case counts, but the region’s chief medical officer of health requested that the province move it back to the tiered framework to bring it in line with most of Ontario’s other public health units. The stay-at-home order remains in effect only for Toronto, Peel and North Bay-Parry Sound until at least March 8.

Across Atlantic Canada, Prince Edward Island opened its first community COVID-19 vaccination clinic on Monday. The clinic is for people over 80 who don’t live in retirement homes or long-term care facilities. Nova Scotia, which reported one new case on Monday, is also expanding its vaccination efforts with a prototype clinic for people aged 80 and up at the IWK Health Centre in Halifax.

In Newfoundland and Labrador, health officials reported 14 new cases of COVID-19 on Monday.

New Brunswick health officials announced one new case of COVID-19 on Monday and said that another person has died as a result of underlying complications, including COVID-19.

The province also announced a confirmed case of the B117 coronavirus variant first detected in the United Kingdom. The case, which was a previously reported one, is the sixth reported instance of the variant in New Brunswick. 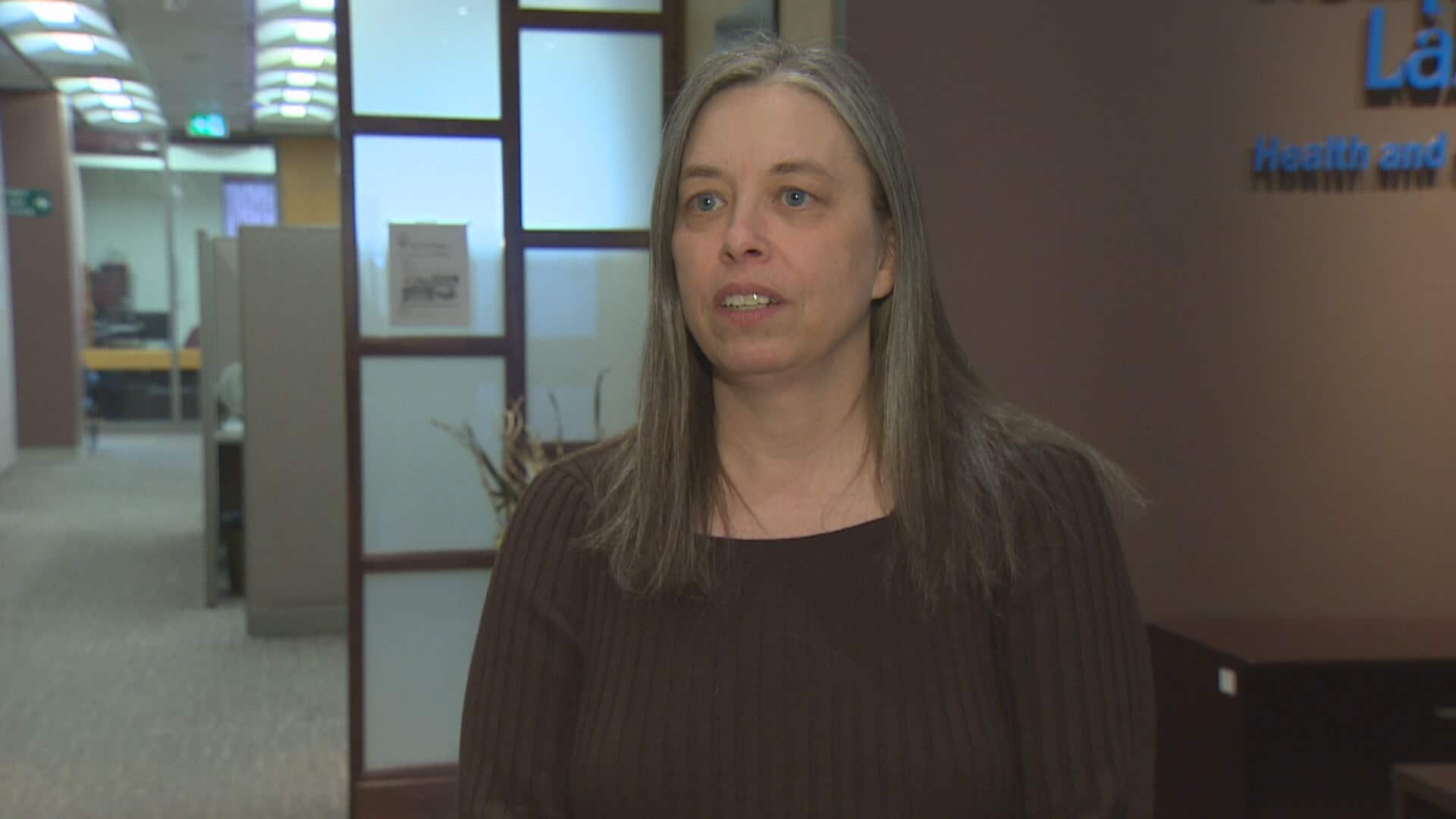 Across the North, there were 12 new cases of COVID-19 reported in Nunavut on Monday, all of them in the community of Arviat. The Northwest Territories and Yukon have not yet updated their figures on Monday.

Alberta reported 273 new cases on Monday and another 16 deaths.

B.C. on Monday confirmed 1,428 new cases of COVID-19 and eight more deaths over the last three days. According to a statement from Provincial Health Officer Dr. Bonnie Henry and Health Minister Adrian Dix, there are now 223 people in hospital with the disease, 63 of whom are in intensive care.

WATCH | Ottawa confident provinces are ready for flood of vaccines: 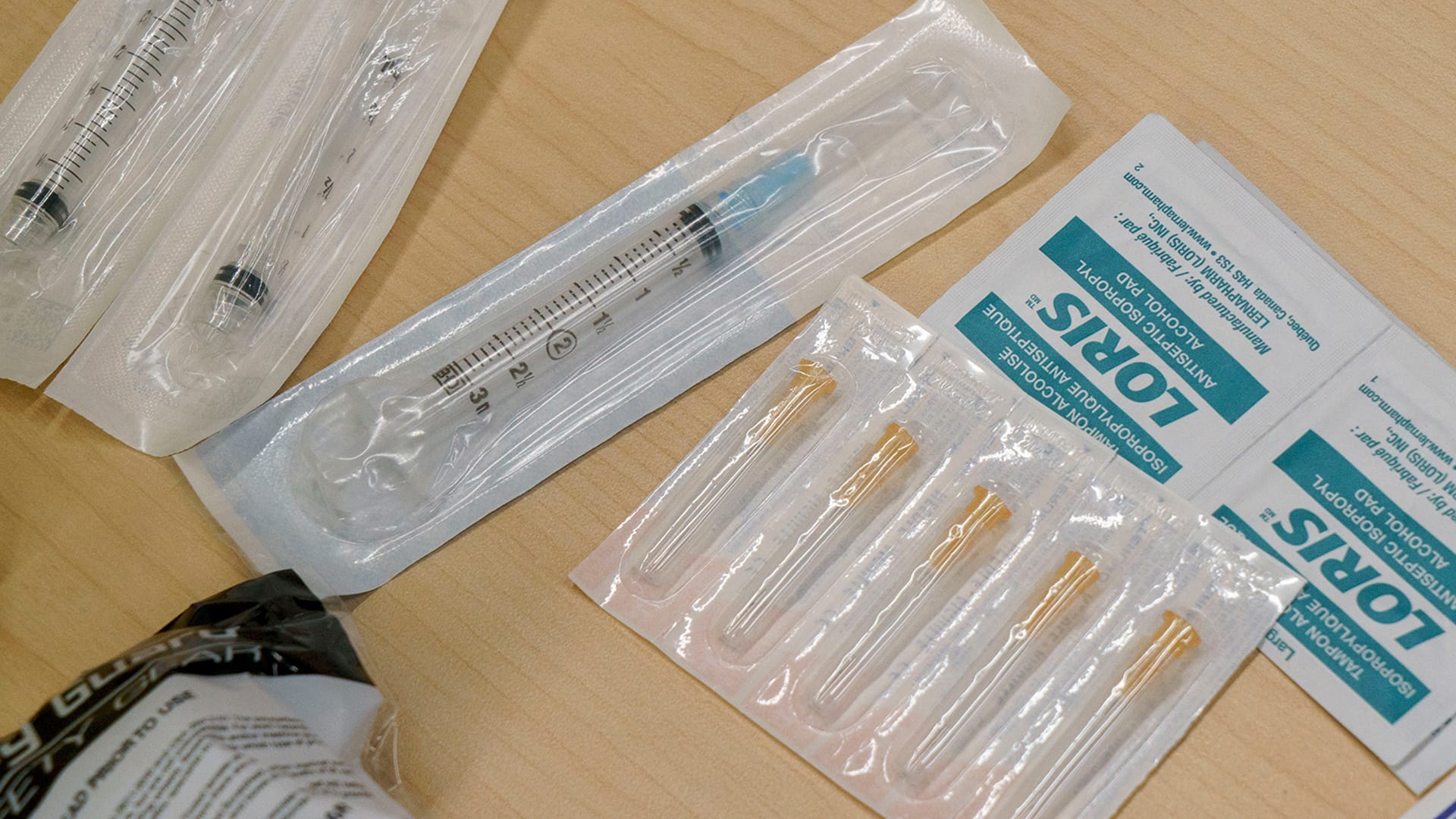 Ottawa says it’s confident the provinces are ready ahead of the largest vaccine delivery yet, with 643,000 doses expected to arrive from Pfizer and Moderna. It’s an injection of hope as variant cases rise, adding a new layer of worry as lockdowns ease. 2:35

Here’s a look at what’s happening across the country:

As of Monday evening, more than 111.5 million cases of COVID-19 had been reported worldwide, with 62.9 million of those listed as recovered or resolved on a tracking site maintained by Johns Hopkins University. The global death toll stood at more than 2.4 million.

GlaxoSmithKline and Sanofi on Monday said they had started a new clinical trial of their protein-based COVID-19 vaccine candidate, reviving their efforts against the pandemic after a setback in December delayed the shot’s launch.

In December, the two groups stunned investors when they said their vaccine would be delayed toward the end of 2021 after clinical trials showed an insufficient immune response in older people.

GSK and Sanofi’s vaccine candidate uses the same recombinant protein-based technology as one of Sanofi’s seasonal influenza vaccines. It will be coupled with an adjuvant, a substance that acts as a booster to the shot, made by GSK.

“Over the past few weeks, our teams have worked to refine the antigen formulation of our recombinant-protein vaccine,” Thomas Triomphe, executive vice-president and head of Sanofi Pasteur, said in a statement.

The new mid-stage trial will evaluate the safety, tolerability and immune response of the vaccine in 720 healthy adults across the United States, Honduras and Panama and test two injections given 21 days apart.

Sanofi and GSK have secured deals to supply their vaccine to the European Union, Britain, Canada and the United States. It also plans to provide shots to the World Health Organization’s COVAX program.

To appease critics after the delay, Sanofi said earlier this year it had agreed to fill and pack millions of doses of the Pfizer-BioNTech vaccine from July.

Sanofi is also working with Translate Bio on another COVID-19 vaccine candidate based on mRNA technology.

In Europe, British Prime Minister Boris Johnson announced a slow easing of one of Europe’s strictest pandemic lockdowns on Monday, saying children will return to class and people will be able to meet a friend outside for coffee in two weeks’ time.

But those longing for a haircut, a restaurant meal or a pint in a pub have almost two months to wait, and people won’t be able to hug loved ones they don’t live with until May at the earliest.

Johnson said the government’s plan would move the country “cautiously but irreversibly” out of lockdown.

Britain has had Europe’s deadliest coronavirus outbreak, with more than 120,000 deaths. Faced with a dominant virus variant that scientists say is both more transmissible and more deadly than the original virus, the country has spent much of the winter under a tight lockdown. Bars, restaurants, gyms, schools, hair salons and nonessential shops are closed, people are urged not to travel out of their local area and foreign holidays are illegal.

That will begin to change, slowly, on March 8, when schools reopen and people are allowed to meet one friend or relative for a chat or picnic outdoors. Three weeks later, people will be able to meet in small groups outdoors for sports or relaxation.

Under the government plan, shops and hairdressers will reopen April 12. So will pubs and restaurants, although only outdoors. Indoor venues such as theatres and cinemas, and indoor seating in bars and restaurants, are scheduled to open May 17, and limited crowds will be able to return to sports stadiums. It is also the earliest date Britons may be allowed foreign holidays.

The final stage of the plan, in which all legal limits on social conduct are removed, is set for June 21. The government says the dates could all be postponed if infections rise.

The measures being announced apply to England. Scotland, Wales and Northern Ireland all have slightly different lockdowns in place, with some children returning to class in Scotland and Wales on Monday.

Hopes for a return to normality rest largely on Britain’s fast-moving inoculation program that has given more than 17.5 million people, one-third of the country’s adult population, the first of two doses of vaccine. The aim is to give every adult a shot of vaccine by July 31, and to protect the over 50s and the medically vulnerable by getting them a first vaccine jab by April 15.

But the government cautions that the return of the country’s social and economic life will be slow.

Elementary schools and kindergartens in more than half of Germany’s 16 states reopened Monday after two months of closure because of the coronavirus pandemic.

The move comes despite growing signs that the decline in case numbers in Germany is flattening out again and even rising in some areas. Germany’s Education Minister, Anja Karliczek, has defended the decision to reopen schools, saying younger children in particular benefit from learning together in groups.

In the Asia-Pacific region, New Zealand will remove remaining coronavirus restrictions from Auckland on Monday after an outbreak discovered in the largest city fades.

Serum Institute of India asked for patience from foreign governments awaiting their supply of shots, saying it had been directed to prioritize India’s requirements. Meanwhile, the state of Maharashtra, home to the country’s financial hub Mumbai, imposed new lockdowns in some areas.

Japan will only receive limited doses of vaccines for the first months of the rollout and shots for the elderly will be distributed gradually, the country’s inoculation chief said.

The Philippines and Thailand have approved Sinovac Biotech’s vaccine for emergency use, while Malaysia moved up its inoculation drive by two days.

In the Americas, Argentina’s drug regulator has authorized the emergency use of Sinopharm’s vaccine ahead of an expected delivery of one million doses of the Chinese-made vaccine.

In the Middle East, Palestinians in Gaza began a limited vaccination program after receiving doses donated by Russia and the United Arab Emirates.

Israel reopened swaths of its economy including malls and leisure facilities, saying the start of a return to routine was enabled by vaccines administered to almost half the population.

In Africa, South Africa remained the hardest-hit country on the continent, with more than 1.5 million reported cases of COVID-19 and more than 49,000 recorded deaths.

The head of the World Health Organization urged Tanzania to share information on its measures to combat the pandemic, saying the authorities there had repeatedly ignored his requests.