You Are Here Home Health News Coronavirus: What’s happening in Canada and around the world on Feb. 8

People in Alberta, Quebec and Nova Scotia are seeing some COVID-19 restrictions lifted Monday, while students in more than a dozen public health regions in Ontario who had been learning remotely ventured back into the classroom.

Also Monday, the Ontario government announced it will allow non-essential retailers to reopen at limited capacity, as it laid out its plan to gradually lift stay-at-home orders.

Three public health units will be the first to see the order lifted on Wednesday as they move into the least-restrictive green category of the province’s colour-coded reopening framework, Premier Doug Ford announced at a briefing Monday afternoon.

Other regions are staying in the grey lockdown phase for now, but the province is making some changes to the restrictions they face. Chief among them is that non-essential retailers will be allowed to open their doors with a 25 per cent capacity limit.

The announcement comes as Ontario reported 1,265 new cases of COVID-19 on Monday and 33 additional deaths, bringing the provincial death toll to 6,538. Hospitalizations in the province decreased to 901, with 335 people listed as being in intensive care units, according to a provincial dashboard.

Students in several regions of the province returned to in-class learning on Monday after starting 2021 remotely. Students in Hamilton and Windsor were among those heading back to school, but in three COVID-19 hot spots — Toronto, Peel Region and York Region — schools will remain closed to in-person learning until Feb. 16.

The province, which over the weekend surpassed 10,000 deaths since the pandemic began, is keeping a curfew in place — but “red zone” communities will see their curfew start earlier than communities with fewer cases.

Restaurants and theatres are also allowed to open in “orange zone” communities as of Monday, though those businesses will stay closed to customers in harder-hit areas for now.

After trending down in recent days, hospitalizations saw a slight increase of six to 969, with 160 in intensive care units, according to a provincial dashboard.

In Atlantic Canada, Nova Scotia is allowing retail businesses and fitness facilities to operate at 75 per cent capacity. The province loosened restrictions in a range of sectors starting Monday as it reported one new case of COVID-19.

New Brunswick officials also announced looser restrictions are on the way  for the Moncton and Edmundston regions  as the province reported two new cases on Monday — its lowest daily number in the new year so far. 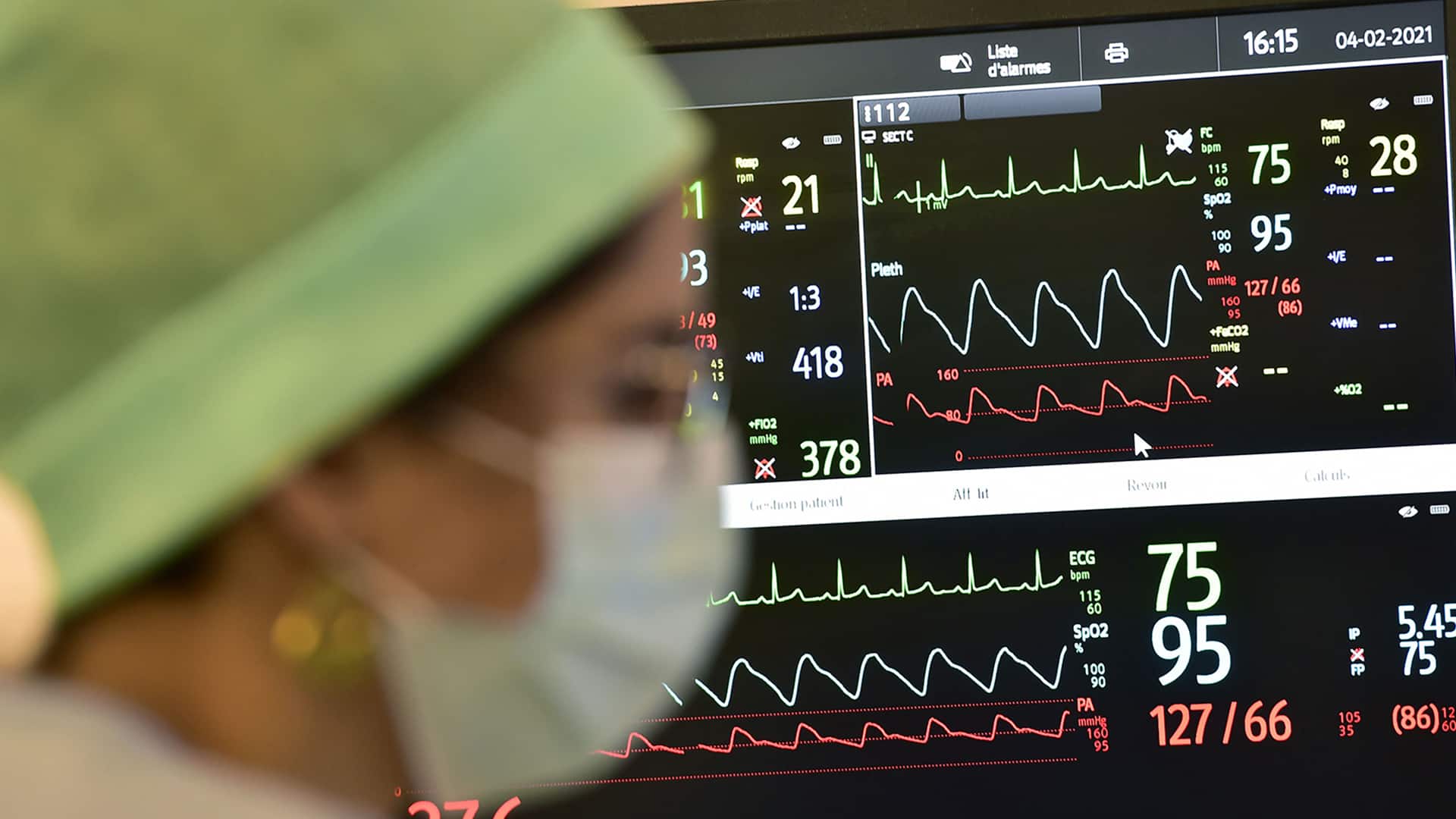 While vaccines can prevent recipients from getting sick, finding and approving treatments for the virus has been difficult. 2:06

Newfoundland and Labrador, however, could see some additional restrictions after health officials reported 11 new cases of COVID-19 on Monday, its highest daily total since April 5. Health officials said the cases are tied to three clusters in the greater St. John’s area.

Chief medical officer of health Dr. Janice Fitzgerald said there is evidence of community spread and urged people to be cautious.

“With community spread in our midst, we need to behave like we did in April,” she said.

Meanwhile, in Alberta, restaurants are now allowed to reopen for in-person dining. Sports and entertainment-related activities can resume in schools, and youth will be able to participate in lessons and practices for team-based minor sports and athletics.

Not every restriction is rolling back, though, as indoor gatherings are still banned, and outdoor get-togethers remain capped at 10.

The loosening of restrictions comes as the province reported 269 new cases, its lowest daily figure since Oct. 17, and five new deaths on Monday.

In the North, Yukon and Nunavut both reported no new cases. 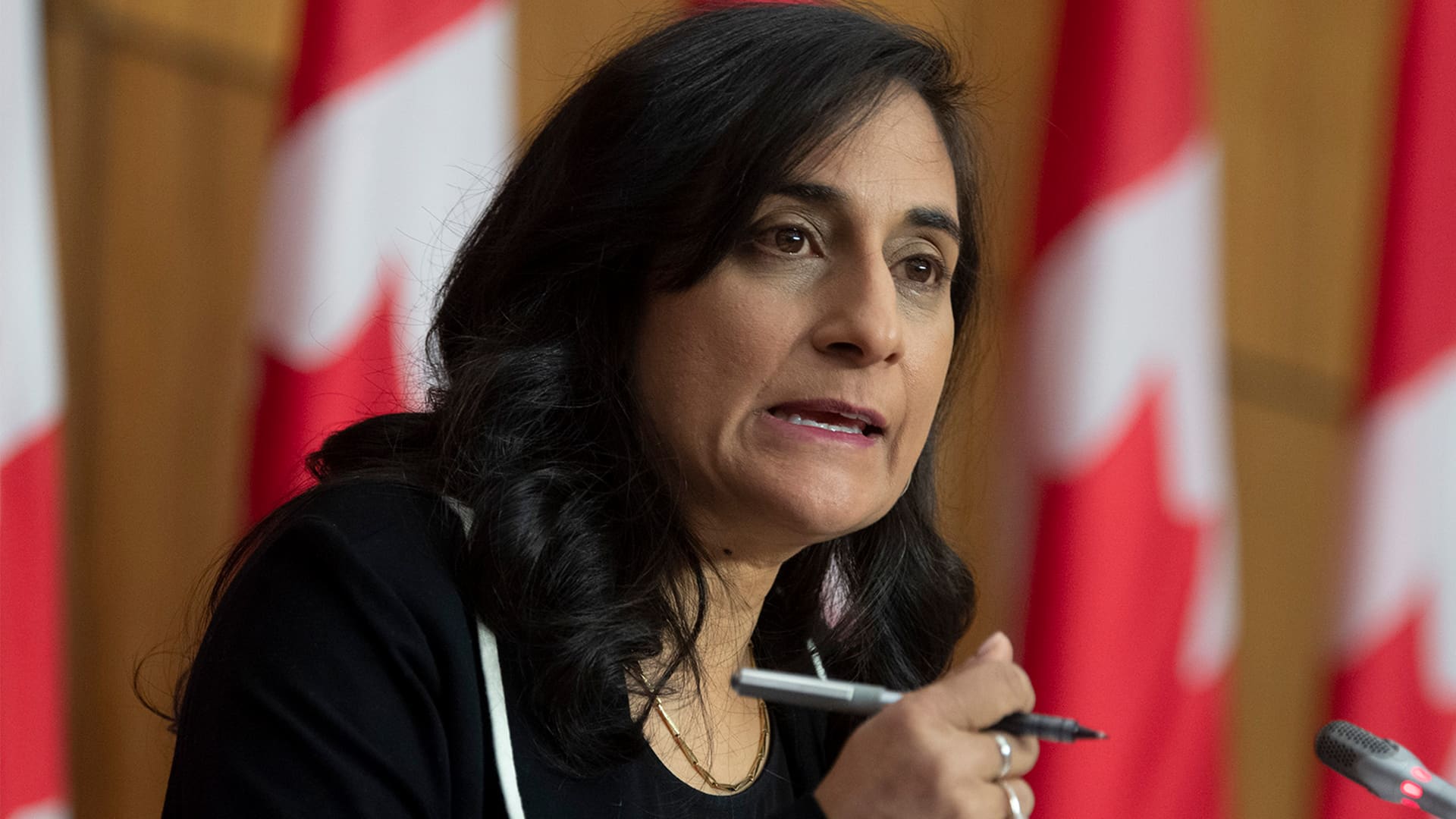 The minister in charge of acquiring Canada’s COVID-19 vaccines says the drought is ending and the country will start to see an incline in supply starting Feb. 15. 2:35

Here’s a look at what’s happening across the country:

As of Monday evening, more than 106.4 million cases of COVID-19 had been reported worldwide, with more than 59.3 million of those cases listed as recovered or resolved by Johns Hopkins University, which maintains a case tracking tool. The global death toll stood at more than 2.3 million.

The head of the World Health Organization said Monday the emergence of new COVID-19 variants has raised questions about whether existing vaccines will work, calling it “concerning news” that the vaccines developed so far may be less effective against the variant first detected in South Africa.

Tedros Adhanom Ghebreyesus said at a media briefing that South Africa’s decision on Sunday to suspend its vaccination campaign using the AstraZeneca vaccine is “a reminder that we need to do everything we can to reduce circulation of the virus with proven public health measures.”

He said it was increasingly clear that vaccine manufacturers would need to tweak their existing shots to address the ongoing genetic evolution of the coronavirus, saying booster shots would most likely be necessary, especially since new variants of the virus are now spreading globally and appear likely to become the predominant strains.

South Africa, which has recorded the most coronavirus infections in Africa and more than 46,000 deaths, will start its immunization campaign with Johnson & Johnson’s vaccine in place of AstraZeneca’s.

A government fact sheet published on Monday said the J&J vaccine would be offered from mid-February. A senior health official said J&J had agreed to speed up deliveries so the first doses would become available around the end of the week.

In the Asia-Pacific region, South Korea’s daily tally of newly confirmed coronavirus cases has fallen below 300 for the first time in more than two months as authorities slightly ease tough physical distancing rules in the country. 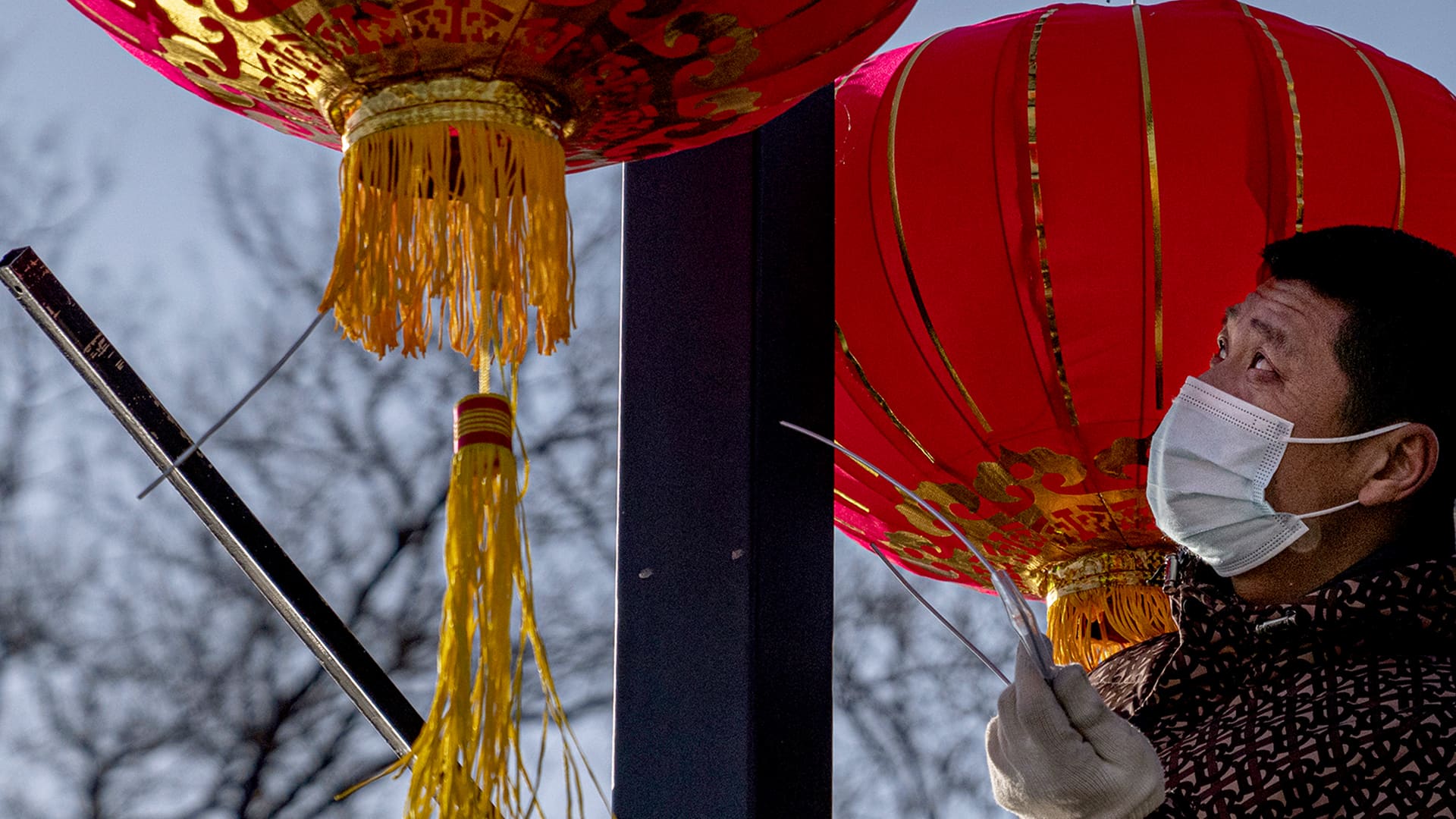 The Lunar New Year is usually a time of travel across China, but the pandemic is forcing millions to stay put and stay away from celebrations. 2:04

China appears to have stamped out its latest coronavirus outbreaks centred on the northeast, reporting no new cases of local infection in its latest daily report.

The National Health Commission said Monday that 14 newly confirmed cases had been brought from outside the country but no new cases were registered in the provinces of Heilongjiang and Jilin that have seen China’s latest clusters. While China has relaxed some physical distancing rules, extensive testing, electronic monitoring and periodic lockdowns remain in place.

In the Americas, Texas Republican Rep. Ron Wright, who had battled health challenges over the past year including lung cancer treatment, has died more than two weeks after contracting COVID-19, his office said Monday. He was 67.

Wright died Sunday, spokesperson Matt Langston said. He did not know the cause of death but said Wright and his wife, Susan, had been admitted to a Dallas hospital in the previous two weeks after contracting COVID-19.

In Florida, fans — many of them maskless — took to the streets and packed sports bars on Sunday evening as the clock inside Raymond James Stadium ticked down on a hometown Super Bowl win for the Tampa Bay Buccaneers.

“It is a little frustrating because we have worked so hard,” Tampa Mayor Jane Castor said during a Monday morning news conference with the Super Bowl Host Committee. “At this point in dealing with COVID-19, there is a level of frustration when you see that.”

Some 200,000 masks were handed out ahead of the game, and “a majority” of people and businesses followed the rules, she said.

To meet coronavirus protocols, the NFL capped the crowd at under 25,000 in a stadium that normally holds some 66,000 fans, and required masks.

But outside the stadium, crowds of fans who weren’t wearing masks or practising physical distancing could be seen celebrating Tampa’s 31-9 win over Kansas City on Sunday night. Folks cheered, crammed into bars and hugged in several hot spots around the city — and swarmed the streets — all without masks.

Mexican President Andres Manuel Lopez Obrador returned to his daily morning news conferences following a two-week absence after contracting coronavirus, but vowed not to wear a mask or require them.

Lopez Obrador revealed Monday that he received experimental treatments, which he described as an “antiviral” medication and an anti-inflammatory drug. The president revealed he twice tested negative in rapid tests widely used in Mexico, before a more thorough test — apparently PCR — came back positive.

Corpses in Bolivia have begun to pile up as a fierce second wave of the coronavirus has overwhelmed funeral homes and cemeteries, according to officials, stoking fears the growing backlog could become yet another focal point of infection.

The bodies of the dead, wrapped in impromptu Andean alpaca wool blankets and blue plastic bags or even packed into suitcases, have inundated funeral parlours in the capital La Paz, the hardest-hit region of the Andean nation.

In the Middle East, the United Arab Emirates will temporarily only vaccinate residents and citizens who are elderly or who have certain health conditions.

The state statistics agency, Rosstat, released its figures for December on Monday, updating its count of coronavirus-linked deaths that includes cases where the virus wasn’t the main cause of death and where the virus was suspected but not confirmed.

Rosstat’s count is much higher than the 77,068 deaths that have been reported by the Russian government’s coronavirus task force so far, including deaths that occurred in January and February. Russian officials ascribe that to different counting methods, saying the task force only includes deaths where COVID-19 was the main cause.

Schools, shops, hairdressing salons and museums are reopening in Austria after the country’s third lockdown, but concerns linger about infection rates and the spread of new coronavirus variants.

The relaxation of measures taking effect Monday is far from complete. People going to the hairdresser will need to show a negative test result that’s at most 48 hours old. In shops, customers have to wear full protective masks rather than just fabric face coverings. Restaurants and hotels remain closed, and authorities say they won’t reopen this month.

Slovenia will reopen ski resorts and some shops, and has eased restrictions on people entering the country after coming under pressure over its handling of the pandemic.

The Netherlands on Saturday surpassed a million confirmed coronavirus infections since the start of the pandemic.

Britain, meanwhile, said it will not introduce COVID-19 vaccine passports, but people will be able to seek proof from their doctor if needed for travel to other countries.

– From The Associated Press and Reuters, last updated at 6:15 p.m. ET