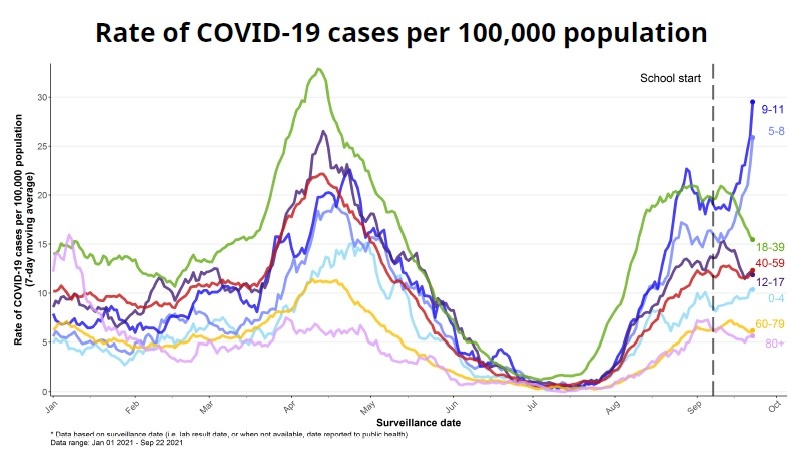 B.C. has recorded a dramatic increase in COVID-19 cases among school-aged children, particularly in areas of the province with lower vaccination rates.

Provincial health officer Dr. Bonnie Henry highlighted the spike in infections during a modelling presentation Tuesday, revealing there were 1,086 cases involving people under the age of 18 in the week ending on Sept. 23.

“We have seen an increase in numbers of children in each of those age groups who have been diagnosed with COVID-19 in the last week compared to what we have seen over the course of the pandemic,” Henry said.

But officials stressed that child hospitalizations have remained low, with just four people under the age of 18 being hospitalized over that same period. Only one of them, who was under the age of five, was admitted to critical care.

There were no deaths in any of those age groups, though Henry noted that one infant and one toddler died from COVID-19 last year.

“We’ve not seen any deaths in school-aged children, and we hope that will continue,” she added.

The return to in-classroom learning this month has been a concern to many parents in the province, particularly as the highly contagious Delta variant dominates cases and as children under the age of 12 remain ineligible for vaccination.

Officials did not provide information on the settings where children have been getting sick, but did share data showing the numbers were already beginning to increase rapidly in areas of lower vaccination prior to the start of the school year, particularly in the Northern Health and Interior Health regions.

Meanwhile, COVID-19 cases among children remained much lower in areas of high vaccination rates, such as the Vancouver Coastal Health and Island Health regions.

In the Fraser Health region, Henry said most of the children testing positive in the five to 11 age range live in eastern communities that have lower immunization rates.

This is a developing story and will be updated.