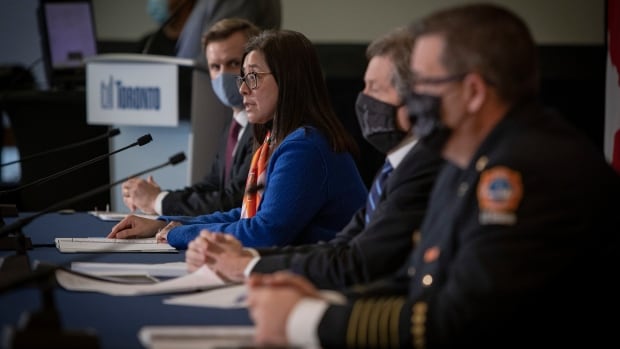 Toronto Public Health (TPH) has confirmed the first workplace COVID-19 outbreak where employees have tested positive for the B117 variant.

The outbreak occurred at Belmont Meats, a production facility near Highway 400 and Steeles Avenue West.

There are 78 confirmed COVID-19 cases linked to the workplace outbreak, with two of those people testing positive for the B117 variant first detected in the U.K. Toronto’s Medical Officer of Health Dr. Eileen de Villa said the city will be conducting more testing in the coming days to see if others were also infected by a novel coronavirus variant.

The city said there’s also evidence of secondary transmission of the variant in household member cases associated with an employee of the workplace.

At this time, there is no indication that any cases identified in the outbreak had recently travelled or had contact with a person who travelled recently.

TPH began its investigation on Jan. 26, after notification of a possible outbreak. The company does not have public-facing operations

Speaking at a news conference Monday, de Villa said this situation represents the first workplace outbreak associated with the B117 variant in the city.

On Monday, Ontario’s Associate Chief Medical Officer of Health Dr. Barbara Yaffe said that in workplace outbreaks, the issue is often that people are letting their guard down during their breaks or carpooling.

“If you’re taking your mask off to eat or drink, make sure you’re at least two metres away from other people,” she said at a news conference.

Dr. David Williams, Ontario’s chief medical officer of health, said the province is working alongside the Ministry of Labour to do more inspections at workplaces to ensure strict adherence to occupational health and safety standards.

He also said they are hoping to use more rapid antigen testing for some workplaces.

According to Monday’s provincial numbers, Toronto has seen 15 cases of the COVID-19 variant first detected in the U.K. to date.

On Monday, de Villa said the new variants are more transmissible, may make some people sicker, and may reinfect people who had COVID-19 and recovered.

She said the vaccines that have been developed seem able to produce an immune response, although sometimes at lower levels. But she said physical distancing is still important in reducing their spread.

At this point, the city said, it is in talks with the provincial public health unit to determine if other measures, such as thicker masks, should be used against the B117 variant.

Over the weekend, two Greater Toronto Area homes banned visitors from Barrie, Ont. a region they called “high alert” for the B117 variant in a bid to keep it out of their facilities.

When it comes to curbing the spread of COVID-19 and the new variant, de Villa said strategies that create distance and limit interaction are still successful.

“The measures we are taking are working” de Villa said.

“Today’s case counts are higher as a result of adjustments due to the transition to the provincial information system for case and contact management,” she said.

The overall number of patients hospitalized with the virus reached 397. Of that number, 105 are in the ICU.

The city confirmed said 18 more people have died of the virus.

To date, more than 2,400 Torontonians have died after contracting the virus.

Toronto Mayor Jonh Tory said during the second lockdown, the city’s seven-day average of new COVID-19 cases has gone from 1,023 at its peak to 592 as of Jan. 28. But he said now is not the time to let up on restrictions.

“We simply have to stay the course to see this thing through,” he said.

Since the start of the pandemic, there have been 87,644 cases of COVID-19 in Toronto.

Meanwhile, GTHA mayors and chairs said they support the new rules and restrictions initiated last week by the federal and provincial governments on travel, as well as the medical officers of health’s call to reopen schools.

“We support the submissions of the Medical Officers of Health about the importance of the safe reopening of schools as soon as possible. This is especially important for the well-being of the students,” officials said in a statement Monday.

De Villa said the city is “very keen” on getting kids back into schools by Feb. 10 and that it is actively discussing what new measures or elements to implement to keep students safe

However, when asked if the more contagious variants of concern might push back the date children go back to classrooms, de Villa said the B117 variant and its increased transmissibility “are cause for concern with respect to our ability to control spread.”