Obtaining the Campaigns list from the server has failed!
Server response:
CM Ad cahger Server plugin is not active on https://legendarygroup.co/admanager/
You Are Here Home Health News Cruise ship in Norway awaits virus test on 2 passengers 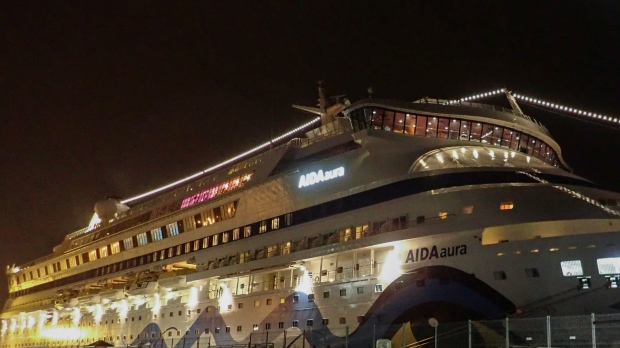 COPENHAGEN — A German cruise ship with 1,200 passengers is moored in southern Norway waiting for the test results of two passengers who had been on land to be tested for the new coronavirus, officials said Tuesday.

The town of Haugesund, 110 kilometres south of Bergen, Norway’s second largest city, was alerted Monday by the ship’s agent that two passengers on the Aida Aura had been in contact with a third person a week ago who tested positive for the virus. That person was not on the ship.

After visiting the ship, a doctor with the municipality of Haugesund said none of the passengers showed symptoms of having the COVID-19 illness.

“The guests were contacted by health authorities in Germany as part of a routine investigation into a medical situation. All guests on board have already been informed about this. All passengers remain on board, visits on land aren’t taking place,” the cruise company said in a statement.

Both cruise ship passengers were tested on land and the results were expected later Tuesday.

The nationality of the passengers on the German ship was not immediately known.

In recent weeks, cruise liners have been either moored with passengers stuck aboard or banned from entering harbours amid growing worry about the spread of the virus.

In Japan, some 3,700 people on board the Diamond Princess cruise ship were forced to endure a long quarantine in their cabins. Hundreds of passengers on that ship tested positive for the illness and several people died from it.

Cruise ships have also been turned away from Caribbean ports due to concerns over the virus, though no passengers on any of those ships has been confirmed to have the disease.

Norway’s coastline is a popular destination for cruise ships because of its breath-taking landscapes and fjords.