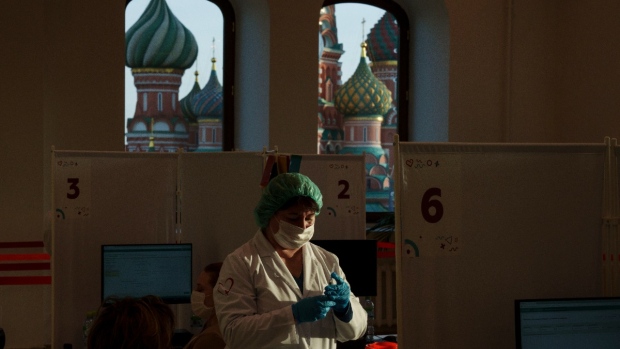 The country’s state coronavirus task force registered 30,726 new infections over the last 24 hours, which is twice as many as 15,830 just a week ago and the highest daily tally since early December. The task force has also reported 670 deaths.

The Omicron variant spreads much more easily than other coronavirus strains, and has already become dominant in many countries. It also more easily infects those who have been vaccinated or had previously been infected by prior versions of the virus. However, early studies show Omicron is less likely to cause severe illness than the previous delta variant.

Infections in Russia steadily climbed all of last week, and officials sounded the alarm about a looming surge of cases driven by Omicron’s rapid spread.

Anna Popova, head of Russia’s public health watchdog Rospotrebnadzor, has warned that daily new cases might reach six-figure levels, and President Vladimir Putin has said that Russia has “a couple of weeks” to prepare for the unprecedented surge.

Moscow Mayor Sergei Sobyanin said Friday that Omicron is responsible for nearly half of all new infections in the capital. On Monday, new virus cases in the city surpassed 7,000.

Russia’s state coronavirus task force has registered over 10.8 million confirmed infections and 321,990 deaths since the start of the pandemic. Russia’s state statistics agency, which uses broader counting criteria, puts the death toll much higher, saying the overall number of virus-linked deaths between April 2020 and October 2021 was over 625,000.

Russia had only one nationwide lockdown, in 2020, and in October 2021, many Russians were ordered to stay off work for a week amid a jump in infections and deaths. However, authorities have generally resisted shutting down businesses or imposing any tough restrictions.

No new measures have so far been announced to curb the spread of Omicron and slow down the surge. On Friday, the government decided to indefinitely postpone introducing restrictions for the unvaccinated they have been mulling over since November.

These restrictions would have limited access to many public places to only those who have been fully jabbed, recently recovered from the virus or is medically exempt from immunization, and have proven to be extremely unpopular among vaccine-hesitant Russians.

Just about 50% of Russia’s 146-million population have been fully vaccinated so far, even though Russia has boasted about being the first country in the world to approve and roll out a domestically-developed coronavirus vaccine.