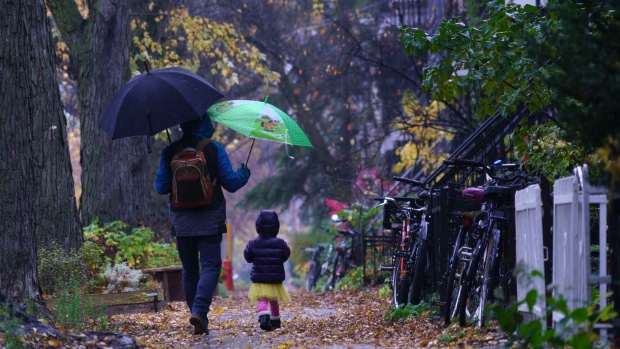 TORONTO — The presence of SARS-CoV-2 antibodies was low among infants and preschoolers attending several daycares in France during the first lockdown, a new study reports.

The study, published on Monday in The Lancet Child & Adolescent Health, indicates that these types of settings are not a major source of COVID-19 transmission.

In addition, the seroprevalence rate, or the number of individuals who tested positive for the coronavirus antibody, among 197 participating daycare staff was comparable to a control group, according to researchers. The control group was made up of 164 office and lab staff from six hospitals who had not been exposed to COVID-19 patients or to young children.

Data on antibodies is seen as a more accurate reflection of infection rates, since it includes those who were infected, but asymptomatic.

The authors found that most children likely contracted the virus from an adult household member previously confirmed with the virus. All of the daycares included in the study were opened for the children of essential workers only.

“Our results suggest that young children are more likely to contract COVID-19 at home, rather than at a daycare centre,” said lead author Dr. Camille Aupiais, with Hôpital Jean-Verdier in Paris, in a statement.

“We suggest that clinical signs of COVID-19 are not the best indicators of infection or for testing very young children and that the main criterion should be a suspected or confirmed case in an adult household member. Further research is needed to fully understand the role of young children in community transmission.”

Earlier studies on the flu had shown that children were often major contributors to the spread of respiratory diseases, but the findings from this latest study suggests that young children do not appear to be spreading SARS-CoV-2, the virus that causes COVID-19. The authors noted that their study appeared to be the first of its kind that looked at the seroprevalence rate from multiple daycares.

The news should be especially reassuring for parents and daycare staff, given that the parents of the children in the study worked in high-risk occupations, such as health care or other essential employment that would potentially expose them to the virus.

Importantly, the study also noted that “although the virus circulated actively during the lockdown, contact with other children and adults was limited to household members, and strict sanitary measures were introduced and enforced in the daycare centres.” Protocols included children being cohorted into groups of six to eight infants in each room and taken care of by the same, fully masked, childcare worker for the entire week. Indoor surfaces were regularly disinfected, and social distance was maintained, especially during lunch breaks.

The study enrolled 327 children between the ages of five months and four years old who attended one of 22 childcare centres during France’s national lockdown between March 15 and May 9, 2020. Most daycare centres and schools were closed, with a few remaining open to accommodate children of front-line workers including health-care and social workers. The 22 centres had an attendance range of eight to 56 children during the lockdown.

Samples were taken one to two months after the restrictions were lifted.

Altogether, 14 of the 327 children (3.7 per cent), and 14 of the daycare staff (6.8 per cent) tested positive for antibodies of SARS-CoV-2. Among the adult control group, nine out of 164, or 5 per cent, tested positive. The seroprevalence rate between the staff and control group was considered statistically insignificant.

The children who tested positive were spread across 13 different daycares. The location that had two cases appeared unrelated, the authors said, because the two infected children had no interactions. Meanwhile, eight separate facilities had staff who tested positive for antibodies.

Despite the promising data, the researchers did caution that a key limitation to their study was that it does not include the new variants that have cropped up and are causing concern in the medical community. There are no published studies yet that have looked into how susceptible very young children are to the seemingly higher-risk variants.