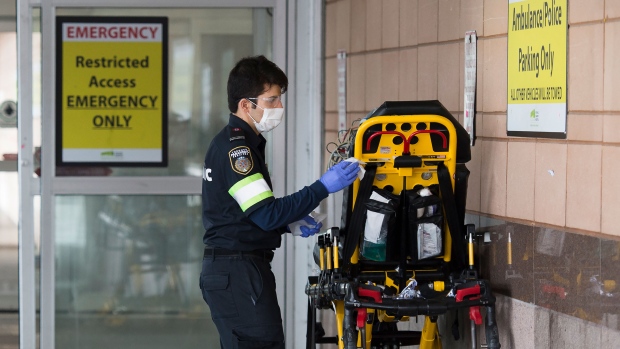 TORONTO — A new study out of the U.K. suggests the Delta variant doubles the risk of COVID-19 hospitalization for unvaccinated and partially vaccinated people compared to the Alpha variant.

The study, published in The Lancet Infectious Diseases journal on Friday, examined more than 40,000 cases of COVID-19 in England between March 29 and May 23 2021. Researchers say it’s the first to report hospitalization risk for Delta versus Alpha variants based on cases confirmed by whole-genome sequencing.

The Delta variant was first reported in India in December 2020 and early studies found it to be up to 50 per cent more transmissible than the variant of COVID-19 that had previously gained global dominance, known as the Alpha variant, first identified in the U.K.

“This study confirms previous findings that people infected with Delta are significantly more likely to require hospitalization than those with Alpha, although most cases included in the analysis were unvaccinated,” said lead study author and epidemiologist Dr. Gavin Dabrera in a press release.

“We already know that vaccination offers excellent protection against Delta and as this variant accounts for over 98 per cent of COVID-19 cases in the U.K., it is vital that those who have not received two doses of vaccine do so as soon as possible,” Dabrera continued.

In all cases included in the study samples of the virus taken from patients underwent whole genome sequencing to confirm which variant they had contracted.

Around one in 50 patients in the study was admitted to hospital within 14 days of their first COVID-19 test. After factoring in variables that attribute to a patient’s susceptibility to severe COVID-19 outcomes like age, ethnicity and vaccination status, the researchers determined the risk of being admitted to hospital was more than doubled with the Delta variant compared with the Alpha.

The study notes multiple studies have shown that full vaccination prevents both symptomatic infection and hospitalization, for both Alpha and Delta variants.

“Indeed in this study only 1.8 per cent of COVID-19 cases (with either variant) had received both doses of the vaccine; 74 per cent of cases were unvaccinated and 24 per cent were partially vaccinated,” the study says.

The authors note it’s not possible to draw statistically significant conclusions about how the hospitalization risk differs between vaccinated persons who later develop Alpha and Delta infections.

“The results from this study therefore primarily tell us about the risk of hospital admissions for those who are unvaccinated or partially vaccinated.”

President and Medical Director of the Vancouver, B.C., Infectious Diseases Centre (VIDC) Dr. Brian Conway said the study should be a “warning” to Canada come the fall, as the delta variant continues to push COVID-19 cases higher.

“It’s a very large population-based study, and after adjusting for various medical comorbidities that are associated with an increased risk of hospitalization, [it found] that those who are infected with a Delta variant are twice as likely to require hospitalization,” Conway said to CTV National News Chief Medical Correspondent Avis Favaro.

“So the issue is raised, but the solution is also presented to us,” he continued. “Those who had received a double dose of vaccine at least 14 days before being diagnosed with COVID-19 only accounted for 3.9 per cent of those who required hospitalization.”

Conway said a major takeaway from the study would be to “vaccinate more” in light of the effect the delta variant could have on the public health system in Canada.

“A very small minority of those who required hospitalization, less than five per cent, had been fully vaccinated,” he said. “So I think that it’s a really good call to arms for Canada – lets get back to the vaccination rates that we were seeing in late June…right now we’re barely vaccinating 100,000 people per day and we know we can do more.”

“I think this paper really suggests to us what would happen if we choose not to do more…essentially delta accounts for virtually 100 per cent of the new cases that are diagnosed on a daily basis in Canada,” Conway continued.

Conway’s concern for strain on the healthcare system under a steady onslaught of Delta variant COVID-19 cases are echoed by study lead author and senior statistician at the University of Cambridge Dr. Anne Presanis.

“Our analysis highlights that in the absence of vaccination, any Delta outbreaks will impose a greater burden on health care than an Alpha epidemic,” Presanis said in the release. “Getting fully vaccinated is crucial for reducing an individual’s risk of symptomatic infection with Delta in the first place, and more importantly, of reducing a Delta patient’s risk of severe illness and hospital admission.”