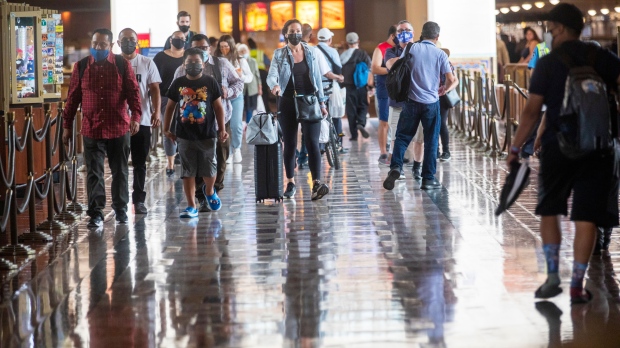 Twenty-four U.S. states have seen an uptick of at least 10% in COVID-19 cases over the past week, Johns Hopkins University data shows, as health experts and the federal government keep pressing for more people to get vaccinated.

The rapid spread of the Delta variant of the coronavirus has only ratcheted up the pressure.

That variant, first identified in India, accounted for 51.7% of all new COVID-19 infections in the country over the two weeks that ended Saturday, the U.S. Centers for Disease Control and Prevention has estimated.

“We should think about the Delta variant as the 2020 version of COVID-19 on steroids,” Andy Slavitt, a former senior adviser to Joe Biden’s COVID Response Team, told CNN on Wednesday. “It’s twice as infectious. Fortunately, unlike 2020, we actually have a tool that stops the Delta variant in its tracks: It’s called vaccine.”

For fully vaccinated people, the variant “presents very little threat to you, very unlikely that you’re gonna get sick,” he explained.

Full approval for vaccines from the U.S. Food and Drug Administration could encourage more people to get vaccinated, Slavitt and other experts have said. The current vaccines distributed in the U.S. are authorized for emergency use only. Full approval for the Pfizer vaccine could come as early as this month, Slavitt said Tuesday.

In a grim reminder of the scale of the pandemic, the global death toll from COVID-19 has reached more than 4 million, data from Johns Hopkins on Wednesday showed.

In total, three countries account for more than a third of all global deaths. The U.S., which has the highest number of fatalities at 606,000, accounts for 15% of the global total, followed by Brazil and India.

Fears about more variants if people don’t get vaccinated

But the Delta variant is not the only one worrying health experts.

“Right now, you want to look at who’s getting sick, whether from the Delta variant or any other variant: It’s people who haven’t been vaccinated,” Dr. Megan Ranney told CNN on Wednesday.

“I don’t want it to come to this, but I am hopeful that these surges will drive more people in those states with low vaccination rates to finally go out and get their shot.”

Vaccinated people don’t have much to worry about, said Ranney, an emergency physician at Rhode Island Hospital and an associate professor at Brown University.

But she offered an unsettling insight on the current surge of cases.

“What worries me more are the variants yet to come. And every time this virus is passed from one person to another, it has a chance to mutate. And it’s only a matter of time until we have a variant against which the vaccines no longer protect us,” she explained.

Some experts have begun asking whether it may be time to start testing vaccinated people to ensure the Delta variant does not evade the effects of vaccines.

“I think now we should revisit this policy with the Delta variant and determine if the current recommendations hold up,” Dr. Peter Hotez, dean of the National School of Tropical Medicine at Baylor College of Medicine, wrote in an email to CNN on Wednesday.

The CDC is only reporting data on “breakthrough” infections that cause severe disease. That could mean scientists and health officials will not know how many vaccinated people have mild or asymptomatic infections — and it will be very difficult to track whether a new variant such as Delta is causing more vaccine failure.

In a move to get more shots into arms, Maryland will provide US$1 million in college scholarships beginning Monday for people between 12 and 17 who get vaccinated, Gov. Larry Hogan said.

“I cannot imagine a better incentive than a college education,” said Dr. Jay Perman, the chancellor of Maryland’s university system.

All COVID-19 deaths in Maryland last month occurred in unvaccinated people, state officials said in a tweet. Additionally, 95% of new COVID-19 cases in the state — as well as 93% of new hospitalizations — occurred in people who were unvaccinated, according to Michael Ricci, the governor’s spokesperson.

More than half of Marylanders between the ages of 12 and 17 are fully vaccinated, state health data shows.

Under the incentive program, two scholarships will be awarded every week for eight weeks through Labor Day, when four winners will be picked, Hogan said. Winners will get a Maryland 529 prepaid college trust contract, which locks in today’s tuition rates for the future, or a Maryland 529 College investment plan, Hogan said.