You Are Here Home Health News Does spraying disinfectant in public places kill the COVID-19 virus? 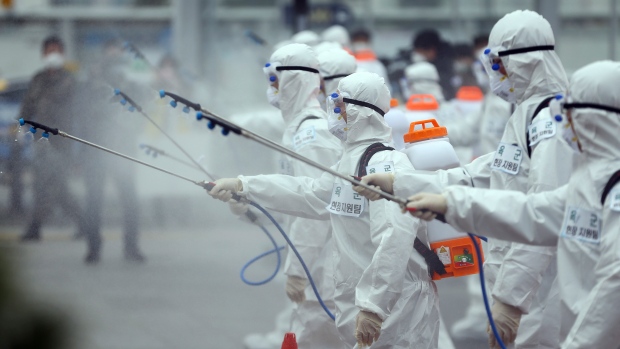 TORONTO — While disinfecting surfaces that are commonly touched in hospitals, schools, religious sites and elsewhere can help kill germs, there is no evidence to suggest that misting sanitizer into the air is effective against the COVID-19 virus, and one expert says doing so may be causing more harm than good.

“Getting the disinfectant onto the right surfaces, surfaces which people are likely to touch a lot, in the correct concentration to kill the organism, and in a way that doesn’t cause additional safety risks to workers or the public can be challenging,” Thomas Tenkate, director of Ryerson’s School of Occupational and Public Health, said in an email to CTVNews.ca.

Sanitation workers have been seen around the world spraying public places including streets, parks and plazas of the cities hardest hit by the new novel coronavirus with disinfectant. According to various local news reports from cities across Asia, the disinfectant most commonly used outdoors is a diluted solution of sodium hypochlorite, which is also known as bleach.

However, widespread disinfection using bleach can be harmful to those exposed to it.

“[Bleach] comes with inherent difficulties in our ability to apply it effectively to high-touch surfaces, and it also has safety implications for workers spraying the disinfectant and also for members of the public who come into contact with the spray,” Tenkate said.

Bleach can burn the skin and eyes, which is why people spraying it usually wear protective equipment. It can also trigger respiratory conditions among those who are often exposed to it.

Unless there is some ongoing virus-killing effect of the disinfectants after the spraying, Tenkate said the mass spraying pictured in countries overseas may be an over-reaction.

“I have seen photos of trucks driving down streets spraying out disinfectant onto the roads and sidewalks, and this doesn’t seem to be a very efficient way to apply this safely,” he said. “I have also seen images from overseas where people were getting sprayed with disinfectant… This is not a safe thing to do as the disinfectant can cause burning to eyes and should not be ingested.”

An October 2019 study published in JAMA found that nurses who regularly used disinfectants to clean surfaces were at higher risk of developing chronic obstructive pulmonary disease. A 2017 study also linked exposure to disinfectants to asthma in German adults.

Tenkate said widespread disinfecting may be successful in controlled situations if proper safety precautions are in place.

“It can be effective in the right circumstances and as part of a comprehensive approach to control and prevention,” he said. “It would work in situations where you can have the workers protected with personal protective equipment and the spray is being applied in a confined space that is vacant such as on buses and streetcars.”

Despite China’s widespread spraying, even one of its own scientists has begun to question its impact.

In a March television broadcast by state CCTV in China, Zhang Liubo, a researcher at the Chinese Center for Disease Control and Prevention, warned widespread disinfectant spraying could alter ecosystems in ways that would have unintended consequences.

“Outdoor surfaces, such as roads, squares, lawns, should not be sprayed with disinfectants repeatedly,” Zhang said. “Spraying disinfectants over a large area and repeatedly may cause environmental pollution and should be avoided.”

It is not known whether bleach destroys the COVID-19 virus outside like it does on indoor surfaces because scientific research has yet to be done on the issue.

According to the New England Journal of Medicine, the novel coronavirus can live on different surfaces for a few hours or up to several days if touched by an infected person, some of whom show no symptoms.

Bleach is commonly used in disinfectants because of its ability to break down virus proteins — the basic units that keep the virus functioning. Alcohols can also disrupt the fatty outer membrane that coats many viruses, including the COVID-19 virus, which prevents them from latching onto human cells and replicating.

“This means they are one of the easiest types of viruses to kill with the appropriate disinfectant when used according to the label directions,” as per the Health Canada website.

But it is unclear whether the bleach would kill viruses in the air or if doing so is even necessary.

The World Heath Organization (WHO) says studies suggest that the coronavirus cannot be transmitted by air. The respiratory droplets responsible for spreading the virus are too heavy to stay suspended in the air, instead falling onto the floor and nearby objects and surfaces right away.

“Disinfectants like bleach seem to be effective in killing coronaviruses. However any measure like this have to be used in conjunction with a range of prevention measures — it is not effective if this is the only thing that is done,” Tenkate said.

Transmission of the coronavirus most commonly comes from breathing in respiratory droplets sent into the air when an infected person coughs or sneezes. The Centers for Disease Control and Prevention (CDC) says there have been no documented reports of COVID-19 transmission to persons from surfaces contaminated with the virus.

“As coronoviruses are spread from people to people, the most important measure is to stop transmitting the virus through coughing, sneezing, breathing on each other in close proximity,” Tenkate said. “Applying a disinfectant to surfaces which are likely to be touched, can be an additional, somewhat secondary, way to stop transmission.”