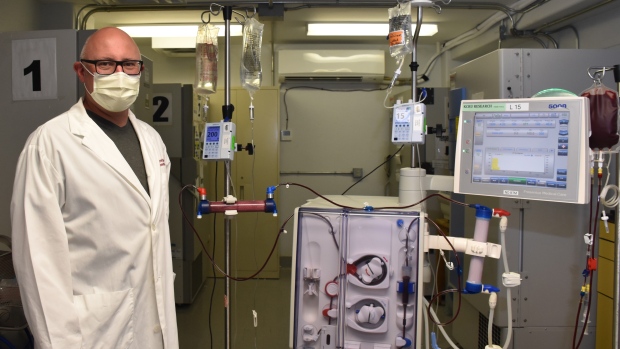 TORONTO — A team of Canadian researchers trying to treat seriously ill COVID-19 patients with a modified form of dialysis is seeing promising signs that they are able to fend off deadly immune system responses to the novel coronavirus.

“So far, the responses have been very positive – but obviously it’s very early days,” Dr. Chris McIntyre, who leads the team at the Lawson Health Research Institute in London, Ont., told CTV’s Your Morning on Wednesday.

The researchers are believed to be the first in the world to look at using dialysis machines, which are commonly available in intensive care units (ICUs) to treat patients whose immune system responses to COVID-19 include severe inflammation.

This inflammation is one sign of a phenomenon known as a “cytokine storm.” It is normal for the human body to produce cytokines to fight off infection and then stop once the virus or bacterium has been defeated. During a cytokine storm, though, the immune system does not stop creating cytokines – making so many that they begin to harm the body, leading to potentially deadly outcomes.

Some members of McIntyre’s research team had travelled to northern Italy to help COVID-19 patients there in the early days of the pandemic.

“It was becoming very clear from their reports that, although the first part of the disease is a terrible pneumonia … the second part of the disease, for people who are very ill in ICU, is actually partly to do with inflammation,” McIntyre said.

The researchers theorized that they might be able to combat that inflammation by using dialysis machines to remove inflammation-fighting white blood cells from the body, chemically treat them and return them to the body.

“Hopefully at that point [they] hone in on the various organs that are full of inflammation and try to control that,” McIntyre said.

Forty critically ill COVID-19 patients are currently being monitored by the team, with half receiving standard care for the disease and the other half being subjected to the dialysis treatment. If the latter group’s blood pressure stabilizes and need for blood pressure medication subsides, it will be a sign that the treatment is working.

Should the dialysis-based method prove successful, McIntyre said, it could become widespread at little cost and with relative ease, as the necessary equipment is “already available in pretty much every ICU … around the world.”

The treatment could potentially also be viable for anyone who develops sepsis while in an ICU, McIntyre said.

All gas, no brakes: Testosterone may act as ‘brake pedal’ on immune response

N.B. limits AstraZeneca as first dose; expands vaccine rollout to include anyone 30 and older