You Are Here Home Health News England and Scotland exempt some countries from quarantine, but not Canada 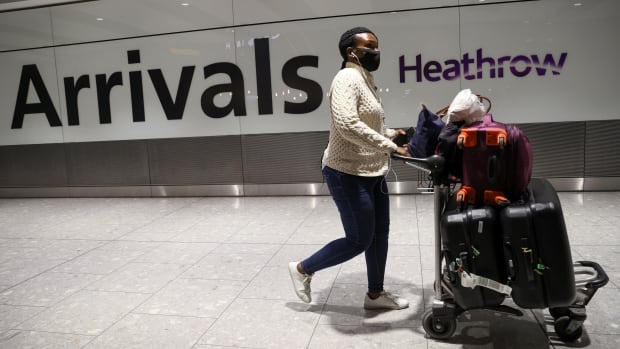 The change goes into effect on Aug. 2, according to a news release from the U.K. government and a statement from the Scottish government. While the U.K. Department for Transport has confirmed for CBC News that the change does not apply to Canadians, no reason has been given for the exclusion.

In a statement issued to CBC News, a Department for Transport spokesperson did not say why Canadians are not exempt.

“We are taking a phased approach to restarting international travel while protecting public health,” the statement says. “We want to welcome all international visitors back to the U.K. and are working to extend our approach to vaccinated passengers from important markets and holiday destinations.”

A spokesperson for the British High Commission in Ottawa issued a similar statement to CBC News.

“Ensuring safe and open travel is a priority and we are engaging with international partners on certification to ensure travel for vaccinated people is unhindered in the future,” says that statement.

From 2 August, passengers who are fully vaccinated from the US and European countries (currently excludes arrivals from France) will be able to travel from Amber countries to England without quarantine.<br><br>We are also restarting international cruises. Find out more👇

As of today, Wales and Northern Ireland have not updated their rules for travel — which require a quarantine upon arrival from outside the U.K. unless the traveller was fully vaccinated through the U.K. vaccination programme.

Travellers from Canada to England and Scotland will still have to quarantine at home or in the place they’re staying for 10 days, and take a COVID-19 test on or after their eighth day in the country. A few exceptions apply — one of which covers travellers who have been vaccinated in the U.K. A full list of rules can be found on the Department for Transport’s website.

Just over 57 per cent of Canadians aged 12 and over have received two doses of a COVID-19 vaccine, according to the federal government. That’s similar to the rate of vaccination among the same age group in the United States, according to data from the American Centers for Disease Control and Prevention.

According to VisitBritain, the official tourist board for Great Britain, travellers from Canada made around 874,061 visits to the U.K. in 2019.

Travellers from the United States, meanwhile, made just under 4.5 million visits, making the U.S. the top country for inbound visitors to the U.K. France, Germany, Ireland and Spain round out the top five — all of them EU members.

When asked about the change in travel rules at an announcement in Vancouver today, Deputy Prime Minister Chrystia Freeland said she respects the decision.

“I have a great deal of respect for every country’s sovereign right to decide during COVID who can come into the country and on what terms,” she said.

The exemption applies to some European countries outside the EU, such as Norway and Iceland, but travellers from France will still have to quarantine even if they are fully vaccinated.

“Passengers who are fully vaccinated in the EU with vaccines authorised by the European Medicines Agency (EMA) or in the USA with vaccines authorised by the Food and Drug Administration (FDA), or in the Swiss vaccination programme, will be able to travel to England without having to quarantine or take a day 8 test on arrival,” the news release from the U.K. government says.

Michael Matheson, the Scottish transport secretary, cited the success of the vaccine rollout in the U.S. and EU as a reason for the decision.

“This has only been made possible due to the overwhelming success of our vaccination programme here in Scotland when coupled with successful rollouts of vaccination schemes in the EU and U.S.,” he said in a news release.

“Fully vaccinated travellers will be able to travel to Scotland under this significant relaxation of international travel measures, providing a boost for the tourism sector and wider economy while ensuring public health is protected.”

Scotland says it’s accepting both the EU Digital COVID Certificate and the U.S. Centers for Disease Control and Prevention “white card” as proof of vaccination.