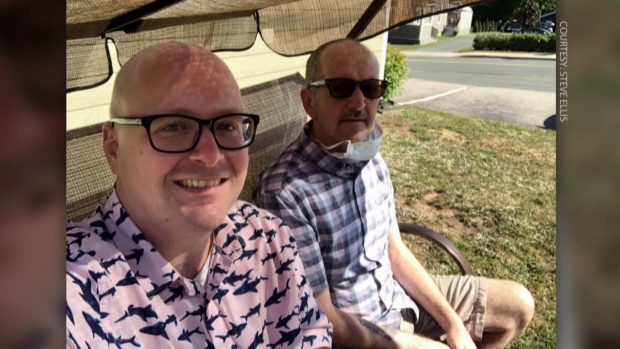 HALIFAX — Those diagnosed with a rare brain disease in New Brunswick say they’ve been left in limbo and have yet to hear from public health officials regarding their diagnosis.

Roger Ellis is believed to have been suffering from the rare neurological condition for the past two years, but the 63-year-old hasn’t been officially diagnosed due to the mysterious nature of the disease. He is still waiting to hear from the province on his condition.

Roger’s son Steve, who lives in Halifax, has watched his father’s deteriorating health from afar, unable to visit his father in New Brunswick for nearly a year due to pandemic travel restrictions.

“Some days he is very repetitive and very much not with it cognitively, other days we get glimpses of the old dad,” Steve Ellis told CTV National News.

Ellis is one of 48 other patients in New Brunswick who are under investigation for the mystery disease. Six people are known to have died from the illness.

Frustrated with the lack of information available, and eagerly waiting to hear from public health on his father’s status, Ellis turned to social media to create an online resource where people suffering from symptoms of the disease can connect.

“We just want to be kept informed, even if it’s not much to say. Keep us informed,” said Ellis.

“There is no information being held back, the work with interviews is going to start next week,” said New Brunswick Health Minister Dorothy Shephard.

As far as Ellis knows, none of the families of the 48 cases have been contacted yet.

Those who have a suspected or confirmed case of the disease have all lived or spent a prolonged time in Moncton, N.B. or the Acadian Peninsula. The patients between the ages of 18 to 85, according to the province’s health department.

Symptoms of the unknown neurological syndrome include rapidly progressing dementia, muscle spasms and atrophy. Scientists are looking to the possibility of whether this disease could be caused by food or the environment, considering the cluster of New Brunswickers who may have it. Otherwise, very little is known about the illness.

Many of the symptoms are similar to known diseases, such as Creutzfeldt-Jakob, Alzheimer’s, Parkinson’s and ALS; however, those illnesses have been ruled out in each case. Doctors say this could be a new disease, but because of the number of cases spanning over a number of years, questions still remain.

Luc LeBlanc is among the people who have recently received a positive case of the condition.

“It’s really just a ticking time bomb because you don’t know how long you have it,” said LeBlanc.

The 42-year-old father of two says he has more questions than answers. He has since turned to social media to learn more about his condition. He eventually found Ellis’ online community of people who are able to talk openly about their condition.

“I never got any answers that I was looking for or how to cope or how to expand my life,” said LeBlanc.

New Brunswick health officials launched a website about the disease in April and the province’s health minister says there is sufficient information online. Family members want the government to reveal the communities where each case is located.

A special clinic has also been established where neurologists from across the country are studying everything from the environment to food for a possible cause of this mysterious disease.

– With files from CTV Atlantic