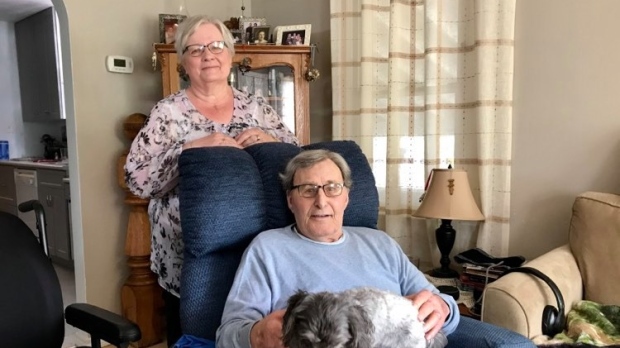 NORTH BAY — Diane and Louis Demers have spent the last 51 years at each other’s side.

But when Louis was admitted to hospital earlier this month, it marked the first time Diane was denied the chance to spend the night with him.

“It was heart-wrenching for one thing,” says Diane. “After I got home I just called my son and I said, ‘Listen, I don’t know if you guys are going to be on board with this, but I am taking him out of there tomorrow no matter what.’”

When Diane brought Louis home he looked at her and said: “why did you leave me there?”

Diane said she didn’t want to leave him and didn’t know caregivers weren’t allowed to be there until staff took him away.

Six years ago, her husband was diagnosed with vascular dementia. Since then, Diane and other family members have taken turns spending nights with him in hospital.

The Demers family says it’s calling on the government to make changes that would allow caregivers the right to be at their loved one’s side.

“A child under 16 has to have a parent or a guardian — they can’t be denied,” said Diane. “Well, I want the same thing for people with Alzheimer’s or dementia, cognitive difficulties … They have to fall in that category.”

The Alzheimer’s Society Sudbury-Manitoulin North Bay and Districts agrees caregivers and family members are advocates for their loved ones and often understand better what the patient needs.

“We would never want to put anyone at risk of COVID-19 or any deadly virus,” said Stephanie Leclair, executive director of the Alzheimer’s Society. “But we do feel that it’s important that we do see care partners not as visitors, but at partners in care.”

The province’s chief medical officer of health issued a memo last week recommending acute care settings begin planning for the return of visitors. The hospital said since then, it’s been working with the Ontario Hospital Association to go over guidelines.

“For privacy reasons, we are not able to comment on specifics for patients,” the hospital said in a statement to CTV News.

“We plan to be able to welcome some essential visitors back later this week.”

The Demers family says it has reached out to a number of organizations and Nipissing MPP Vic Fedeli. They say they won’t rest until changes are made.