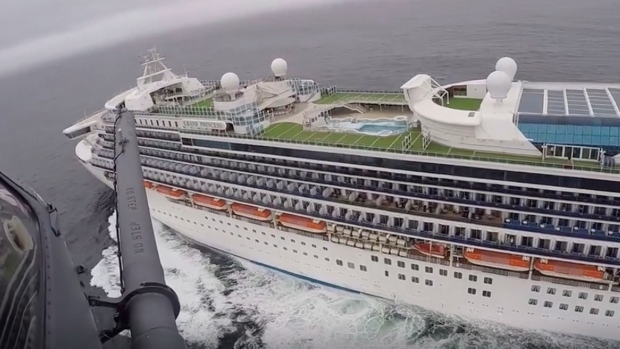 TORONTO — The federal government is chartering a plane to repatriate Canadians on board a cruise ship that is being held off the coast of California because of an outbreak of COVID-19.

Global Affairs Canada announced on Sunday that the plane will transport Canadians from the Grand Princess cruise ship. They will be flown from San Francisco to Canadian Forces Base Trenton in Ontario.

“This decision was made following a request for assistance from the Government of the United States to repatriate Canadians,” a statement reads.

More than 230 Canadians are among the 3,500 people on board the vessel.

The Canadian government states that passengers will be screened for symptoms before they can board the plane.

“If they exhibit symptoms, they will not be permitted to board and will instead be further assessed to determine next steps.”

Those brought back to Canada will be put in a 14-day quarantine at CFB Trenton, Global Affairs said.

“Protecting the health of all citizens is our priority, and we are bringing Canadians home because of the number of cases on the Grand Princess,” said Health Minister Patty Hajdu in a statement.

The U.S. government announced on Friday that 21 passengers on the ship had tested positive for novel coronavirus, which included 19 crew members.

California’s Governor’s Office said in a statement Sunday that the cruise ship will dock in Oakland on Monday.

American passengers aboard the ship will then be taken to U.S. government facilities for quarantine, but it wasn’t clear what would happen to international guests.