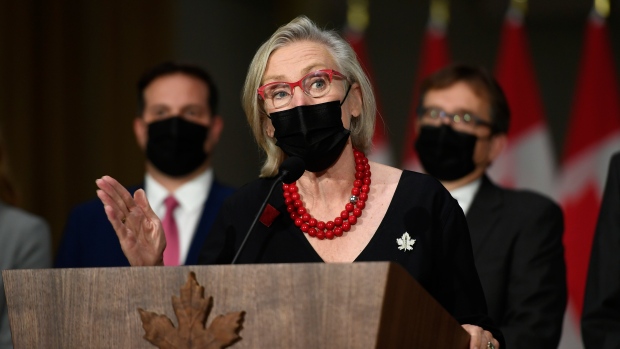 The federal government is taking a close look at options to guarantee results from newly proposed mental-health funding to provinces, according to Canada’s mental health minister Carolyn Bennett.

Bennett says that could include new legislation that would accompany the Canada Mental Health Transfer to ensure standards are met.

“We’ve been talking about whether there needs to be a companion act around codifying the transfer, but also a set of expectations,” she said.

“One of the things we’ve been really lacking even during COVID, it’s been difficult, is the data and without data we don’t know the areas of greatest need or whether things are working. How do we fund what works and stop funding for what doesn’t?”

Bennett said developing accountability measures will coincide with her team’s job to establish national standards of mental-health care across the country, which at this point are a patchwork of different targets and objectives.

“There are some standards for substance use programs but I need to know a little bit more about that in terms of what is the evaluation of what’s working and what’s not working…how do we move forward as we would for cardiology or for physical medicine?” she said.

The Liberal government first announced the mental-health transfer proposal in their election campaign, and earmarked $4.5 billion for the project.

They promised it would “help each jurisdiction focus on and solve critical backlogs in service and provide help to those who need it, according to the unique needs in each region.”

The proposal is the first pillar listed in Bennett’s mandate letter.

Prime Minister Justin Trudeau has asked that the minister “work with the minister of health, and with the support of the deputy prime minister and minister of finance, to establish a permanent, ongoing Canada Mental Health Transfer to help expand the delivery of high-quality, accessible and free mental health services, including for prevention and treatment.”

Mental health spending in the provinces is currently dished out through the existing Canada Health Transfer. However, according to the Mental Health Commission of Canada, the country spends considerably less on mental health than comparable countries.

Today, Canada’s share of mental health spending is closer to nine per cent.

While provinces are usually turned off by the notion of money with “strings attached,” it’s not the first time the federal government would be introducing them.

It did so in 2004, when it announced $5.5 billion for the Wait Times Reduction Fund over 10 years, which required all provinces and territories to commit to a set of common wait time targets and report their progress in meeting those targets.

A decade later the Wait Time Alliance reported that some provinces, notably Ontario, Newfoundland and Labrador and Saskatchewan, had made “substantive” and “sustained” progress in reducing wait times.

Dr. David Gratzer, psychiatrist and co-chief of the General Adult Psychiatry and Health Systems Division at the Centre for Addiction and Mental Health told CTVNews.ca in an interview that while more federal dollars is a step in the right direction, spending wisely is key.

“We’re moving in the right direction but we also need to move smartly. It’s not just about writing cheques, it’s also thinking about what we’re purchasing,” he said.

“More funding sometimes results in significantly better outcomes. Sometimes more funding results in better compensation for a handful of health-care providers…I think part of the solution is found in us being more internationally competitive with our funding.”

Gratzer pointed to an innovative program developed by the U.K. government to make psychological therapies more affordable, as an example of where the federal government in Canada could play a role.

He also noted enhancing digital technologies in the space is another interesting path the Liberals could carve out.

At the beginning of the pandemic, Ottawa helped launch Wellness Together, an online portal that connects users to mental health resources, in response to a rise in mental health and substance use concerns. Last week, the government introduced PocketWell, a supplementary app that helps Canadians access supports and track their well-being.

Bennett said the pandemic has created a new level of awareness of the need for improved mental health services and there’s a stronger appetite for change.

“I think there’s been a much more collective understanding of the need to support one another in terms of mental and emotional and spiritual health,” she said.