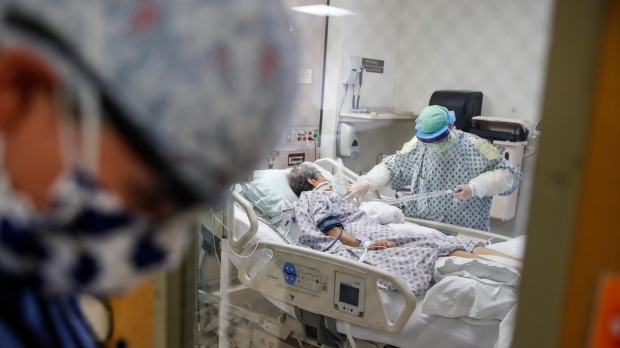 TORONTO — Fewer patients admitted into intensive care due to COVID-19 are dying, according to a new paper published on Wednesday in the journal Anaesthesia that reviewed and analyzed more than 10,000 cases from two dozen studies around the world.

The report, which looked at relevant studies published between late January and end of May found that the death rate for adult COVID patients in ICU decreased over time, to 41.6 per cent from above 50 per cent. Dying from COVID while in ICU, however, was still nearly double that of patients admitted into ICU for other viral pneumonia.

Researchers noted that the ICU mortality numbers did not change significantly around the world, even though factors like admission criteria, treatments delivered, and the thresholds for the treatments were different across the studies.

“Reported ICU mortality fell over time. Optimistically, countries in the later phase of the pandemic may be coping better with COVID-19,” the paper concluded.

“Our analysis is reassuring in that in-ICU mortality is lower than early reports suggested.”

The paper noted that a patient’s age, comorbidities, as well as ethnicity were likely to have a “significant influence” on mortality but did not look into why due to the limited information provided by the data.

Researchers pulled data from 24 observational studies that reported the ICU outcomes for 10,150 patients from China, the United States, France, Canada, Denmark, the Netherlands, Hong Kong, Italy, Singapore, Spain and the UK who were admitted with a COVID-19 diagnosis. The study looked at the number of ICU deaths as a proportion of “completed” ICU admissions — meaning those who were either discharged, or died. Patients still alive in ICU were excluded.

The paper did not explore the impact of treatments since those details, aside from use of a ventilator, varied from study to study, according to the researchers. Analysis by geographical location, sample size, patient characteristics like age, those who were intubated versus those who were not, did not demonstrate any significant differences, it said. But analysis based on the month of publication “was significant”, the authors wrote, noting a reduction in reported mortality over time.

“This remained significant after adjusting for geographic location and proportion of outcomes reported,” the paper said.

The study attributed several possible explanations for these findings:

• the amount of learning that is taking place as a result of clinical studies being quickly published all over the world, especially earlier in the pandemic

• the criteria for ICU admission possibly evolving over time, with non-invasive ventilation care taking place outside of ICU

• earlier studies, which were smaller, could have overestimated mortality rates

In Canada, a study published in CMAJ at the end of June also looked at critically ill patients admitted to ICU for COVID-19 in Metro Vancouver between Feb. 21 and April 14, 2020. That report found that mortality was lower than what other studies had published, suggesting that the prognosis for severe cases might not be as poor as previously thought.

A key limitation to the new study published in Anaesthesia was the high degree of heterogeneity — meaning there was a lot of variability in the data — from study to study.

“Intensive care provision and admission criteria likely differ across global healthcare systems, and so the definition of ‘intensive care’ is unlikely to be consistent in all studies,” the paper said.

Asia reported more non-invasive ventilation, for example, while China reported greater use of antiviral drugs such as corticosteroids and immunoglobulins that were less commonly used in Europe and North America.

“This is consistent with research findings to date suggesting that no specific therapy reduces ICU mortality,” the authors said.

Advanced respiratory support is widely used outside of ICU, a possible indication that patients admitted to intensive care are likely much sicker, the study said. This was the case in Italy, for example, where many patients were given non-invasive ventilation outside the ICU, due to severe demand for critical care beds.

Despite the variations in the studies, the researchers said that further analyses did not result in significant differences, suggesting that the study’s mortality estimates were still notable.

Still, the paper said that in the future, it was important to have more consistency in the data collected and reported, with information on how “intensive care” is defined, the admission criteria for ICU, and clearer details on a patient’s status on admission along with the treatment they received.

The study added that examining the longer-term outcomes of the patients discharged from ICU was also worth exploring further.

The systematic review and meta-analysis was led by Prof. Tim Cook, a consultant in Anaesthesia and Intensive Care Medicine, Royal United Hospitals Bath NHS Foundation Trust, and the University of Bristol’s School of Medicine, and colleagues.

Long-term stress in dogs linked to the owner-dog relationship