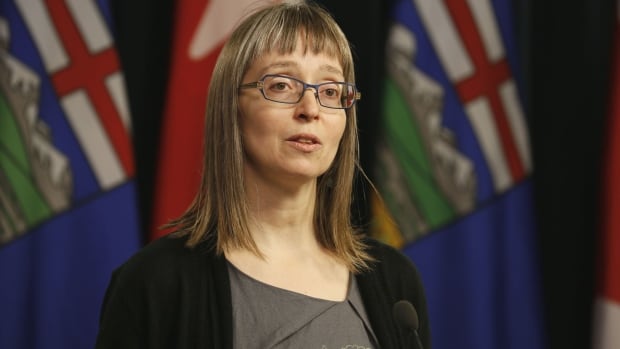 Five more people in Alberta have died from COVID-19 and the province has reported 306 new cases of the illness.

That brings the total number of cases to 3,401 and the number of deaths to 66.

A total of 4,151 tests for the illness were conducted over the past 24 hours.

As of Wednesday, 70 people were in hospital with the illness, including 18 in intensive care beds.

As of Wednesday, 108,521 people have been tested, an average of 2,164 tests per day since March 4, Premier Jason Kenney said at a news conference in Edmonton.

The regional breakdown of the cases is:

Kenney announced that Alberta is again sending medical equipment to help out Quebec, the province hit hardest so far by the pandemic.

Alberta currently has about 600 ventilators in its stockpile, Kenney said, and on any given day uses about 100 of the machines to treat patients with COVID-19 and other serious illnesses.

The province will send 25 ventilators to Quebec, the premier said.

The First Nation is well prepared to deal with COVID-19, Hinshaw said, though the residents there are already dealing with flooding.

“I’d like to commend Sucker Creek First Nation for showing exceptional resilience, with support from a strong partnership of health services and all levels of government,” she said. “And they have my best wishes as they deal with this issue of the flood.”

An outbreak linked to the Kearl Lake oilsands facility north of Fort McMurray has expanded to 32 cases, Hinshaw said. Twenty-five of the cases are people in Alberta, with 10 of them in isolation at the work camp itself. Five of the linked cases are people in B.C. and one each is from Saskatchewan and Nova Scotia.

The biggest outbreak in the province involves a Cargill meat-processing plant in High River. As of Tuesday, 401 workers from the plant had tested positive. One worker had died, and another 114 cases have been linked to that outbreak.

OHS is currently working through the formal process to determine whether to open a fatality investigation, Adrienne South, a spokesperson for the provincial labour minister, said in an email.

Public health officials say a dedicated task force of 200 staff is working on reducing the spread, with particular attention paid to households that may not have space to maintain self-isolation.

Another outbreak at the JBS Food Canada plant in Brooks has been linked to 77 cases.