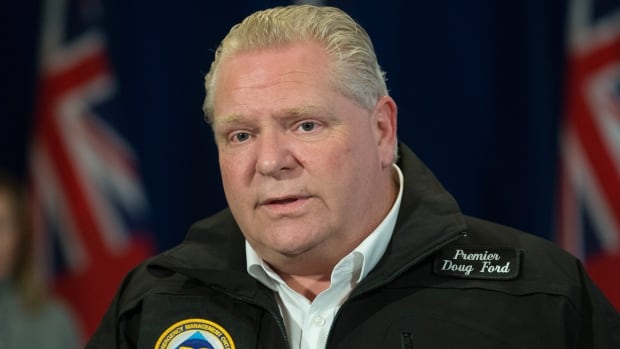 Ontario Premier Doug Ford apologized to Ontarians Thursday morning, days after his government faced intense backlash for introducing a number of additional COVID-19 restrictions that were not recommended by health experts and then nixed earlier this week.

Ford, who is currently isolating at his late mother’s home in Etobicoke after a staff member tested positive for COVID-19, said he wanted to “address the events of this past week” after his government put in new measures in response to “extremely troubling modelling.”

The province was trying to curb mobility in Ontario, he said.

“But we moved too fast,” Ford said, with some measures going too far.

“Simply put, we got it wrong. We made a mistake. These decisions, they left a lot of people really concerned,” Ford said.

“For that I am sorry, and I sincerely apologize.”

The premier and some of his top cabinet ministers have been under fire after announcing last Friday that the province would close playgrounds and hand police arbitrary powers, among other additional measures, in a bid to curb the third wave of the pandemic.

The public outcry to both moves was so swift and fierce that the government reversed course on both within days of the announcement. Members of the Ontario COVID-19 Science Advisory Table also disavowed the decisions, making clear in interviews with media that they were not based on their own recommendations to cabinet.

Various sources close to the government told CBC News the decisions came amid panic over the latest modelling for the pandemic and fears that Ford’s approval among voters would suffer badly if he was not seen to be taking action.

At one point during Thursday’s press conference, Ford appeared to cry while talking about the pandemic and how hard it has been for businesses and families.

“I understand your frustration,” he said. “This experience, this pandemic, it’s something that has affected every single person.”

Driven by variants of concern, the third wave has pushed Ontario’s health-care system to a breaking point. As of Wednesday, there were 2,335 people with COVID-19 in hospitals. Of those, 790 were in intensive care units and 566 required a ventilator to breathe, both new highs for the province.

Hospitals throughout the province have been ordered to stop all non-emergency surgeries amid a record number of patient transfers, as health networks try to cope with the influx of COVID-19 patients.

The provincial government has also faced mounting pressure to implement its own paid sick leave program for workers who fall ill with the disease or are exposed to someone with a confirmed case, something that public health experts and advocates have been demanding for months.

House Leader Paul Calandra said on Wednesday that the province would provide “enhancements” to the federal Canada recovery sickness benefit (CRSB) and that details would be announced “very, very soon.”

Ford said Thursday it is “not lost on him” that he is able to isolate and continue working.

“For too many people right now, that’s not the case,” Ford said.

At press conferences for months, Ford and his ministers have responded to calls for paid sick days in Ontario by saying the province didn’t want to double up on the federal program, which they repeatedly said was sufficient.

Now, suddenly, Ford is saying that he and his ministers have been trying for months to try to work with Ottawa to fix sick pay, alleging there are gaps in the system.

“That’s why we’re now working on our own solution to fill those gaps for everyone in Ontario,” Ford said.