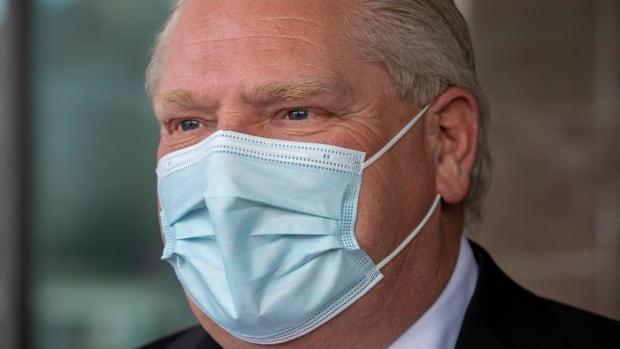 Ontario Premier Doug Ford is expected to announce his government’s plan to gradually ease COVID-19 restrictions in the province today.

A senior government source told The Canadian Press that Ford will allow the current state of emergency to expire on schedule tomorrow. But a stay-at-home order will remain in effect as regions transition back to Ontario’s colour-coded system of restrictions over the next three weeks, the source said.

Ford is scheduled to hold a news conference beginning at 1 p.m. ET at Queen’s Park. You’ll be able to watch it live in this story.

Four public health units with few cases of COVID-19 are expected to go back to the least stringent “green” phase of reopening on Wednesday.

The source also told The Canadian Press that the government will introduce an “emergency brake” that allows the province’s top doctor to immediately move a region back into lockdown if cases spike.

Students in 13 public health units, including Hamilton and Windsor, will return to physical classrooms.

All students in Ontario began January with online learning as part of a provincial lockdown that went into effect in late December.

The province then took a staggered approach to reopening schools, allowing those in northern Ontario and rural areas to resume in-person learning first.

Education Minister Stephen Lecce said the government is taking a number of steps to enhance safety in schools, such as more stringent screening for high schoolers and asymptomatic testing across the province.