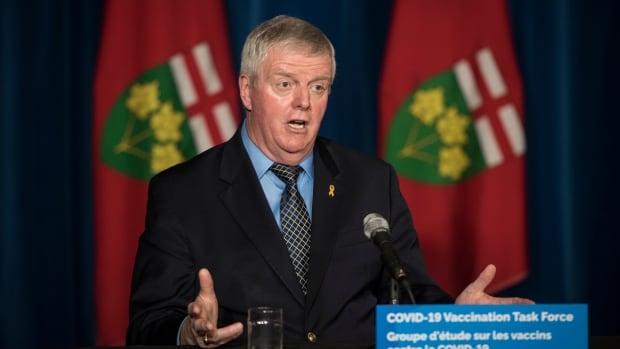 The head of Ontario’s COVID-19 vaccine task force is providing an update this morning on the province’s ongoing immunization campaign.

Health officials on the task force recently said that all of Ontario’s 34 public health units have developed individual plans to distribute and administer COVID-19 vaccines in the coming months. The plans were all submitted to the task force for approval.

Speaking yesterday, Health Minister Christine Elliott said those who wish to receive a vaccine will have the option to set up an appointment either through an online portal, a telephone booking system or through their family doctor, depending on which public health unit they live in.

The province will be releasing more information about how the general public can register for a vaccine “within a very short time,” Elliott added.

As of Feb.14, all residents of long-term care and high-risk retirement homes — generally defined as those that provide memory care — who wanted a vaccine had been given their first shot. Health officials said that adults 80 years old and above should begin receiving doses by the middle of March.

Phase 2 of the immunization campaign, which includes inoculating an estimated 2.8 million members of the public between the ages 60 and 79, is currently scheduled to start in April.

Later today at 1 p.m. ET, Premier Doug Ford is scheduled to hold his own news conference alongside the ministers of long-term care and colleges and universities. You’ll be able to watch it live in this story.