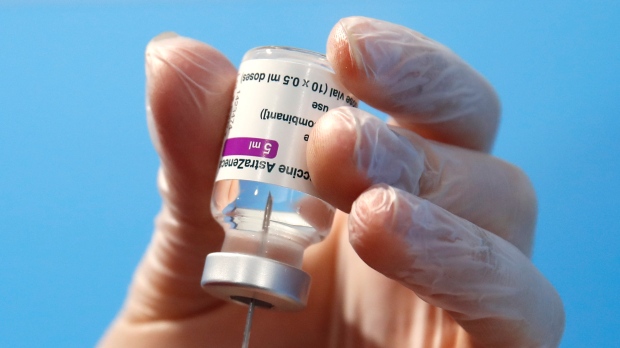 TORONTO — Health Canada has approved the AstraZeneca COVID-19 vaccine for use in this country with the first doses expected to arrive soon.

Canada joins more than a dozen other countries that have given the green light to ChAdOx1 nCoV-19, the shot from AstraZeneca and Oxford University, which was among the first buzzed-about vaccine candidates in 2020.

The company has promised 20 million doses to Canada, with the federal government saying it’s been in talks with AstraZeneca about locking in shipments as soon as the regulatory green light was given.

As well, up to 500,000 doses could be sent to Canada by the end of March as part of the global vaccine-sharing program known as COVAX.

The inoculant, which is the third approved COVID-19 vaccine in Canada, is considered to be relatively cheap and easy-to-store, a factor that sets it apart from the Pfizer-BioNTech and Moderna vaccines already in circulation. AstraZeneca has reached agreements with international health bodies and governments to price each dose at about US$2.50. Doses of the AstraZeneca shot can be stored at temperatures as manageable as 2 C to 8 C, while the other two require ultra-cold freezers.

But the AstraZeneca vaccine has already faced efficacy concerns as variants of the novel coronavirus pop up around the world. In South Africa, officials suspended plans to use the shot on health-care workers after a clinical trial indicated it is less effective against the B.1.351 variant predominant in that country. In France, the vaccine is only being administered to people under the age of 65, as officials cited a lack of data about its efficacy for older people.

The federal health regulator has been reviewing the two-dose vaccine for nearly five months in collaboration with the European Medicines Agency. In early February, health officials said they were going back and forth with AstraZeneca about what information the vaccine label will include and cited ongoing trials in the U.S. as one of the reasons the review process for the jab had been “complicated.”