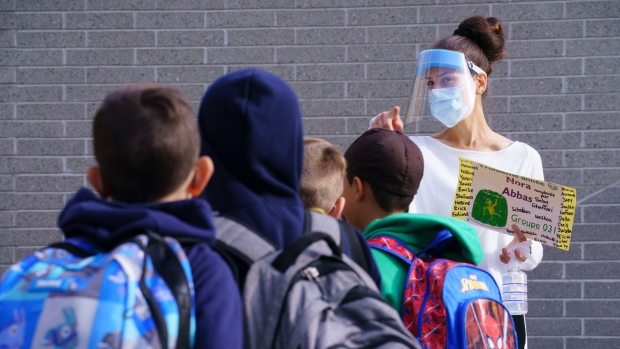 OTTAWA — Parents, medical experts and provincial governments are weighing the risks of sending kids to school during a pandemic against the potential mental health issues of keeping them at home.

While it’s understandably a difficult dilemma, some medical experts believe keeping children at home should only be used in dire circumstances.

A new report from The Hospital for Sick Children in Toronto suggests the suspension of in-person learning should be “a last resort for pandemic control” due to the impact a prolonged closure has on children.

The experts, many of whom advise the Ontario government on return-to-school protocol, said virtual classrooms should be “as time-limited as possible” given how much they can harm the learning of some children.

“It is our strong opinion that an in-person school model with robust application of the recommended risk mitigation interventions is the best option from an overall health and learning perspective for children of all ages allowing for consistency, stability and equity,” the report states.

In other parts of the country, high school-aged students in Quebec returned to class on Monday, after younger students had returned a week prior. In British Columbia, most jurisdictions are also back to in-person learning, though students in the Vancouver-area are splitting their days between in-person and online study.

Students in the Greater Toronto Area and other parts of southern Ontario won’t be returning to class until at least Feb. 10.

In order to keep schools open in these COVID-19 hotspots, the SickKids report suggests students should be tested if they come in contact with anyone who has tested positive for the virus, but doesn’t recommend widespread testing of asymptomatic children, which has been considered previously.

“It is anticipated that we will continue to detect cases of symptomatic and asymptomatic SARS-CoV-2 infection in schools and it is important that public health authorities and schools be prepared to respond to cases involving both students and staff,” the report states. “This includes the need for readily available testing and contact tracing, which is critical for the timely detection and avoidance of outbreaks.”

The report also states that instead of enforcing physical distancing guidelines, masking and cohorting should be “strongly considered” among the younger students.

Even though more than 5,000 Ontario students have tested positive for COVID-19 since classes reopened in the fall, there remains some uncertainty as to how effective the virus spreads in the classroom.

In B.C., Vancouver Coastal Health said last week that there has not been a “significant increase” in cases of COVID-19 in school-aged children since school began in September, compared to other age groups.

Given this uncertainty, researchers at the University of Western Ontario arguethat the reopening of classes is the perfect time to find out for sure how easily COVID-19 spreads at schools.

Dr. Charles Weijer, a professor at Western’s Schulich School of Medicine and Dentistry, argues that any ethical concerns regarding this type of study do not outweigh the importance of understanding if and how the virus through schools.

“We’ve seen a huge shift in clinical medicine whereby most treatments that patients are prescribed are supported by high-quality evidence,” Weijer said in a news release.  “When we’re dealing with public policies around public health or education, there isn’t that same robust evaluation of these policies.”