You Are Here Home Health News Higher concentrations of controversial herbicide glyphosate may soon be on your plate: here’s why 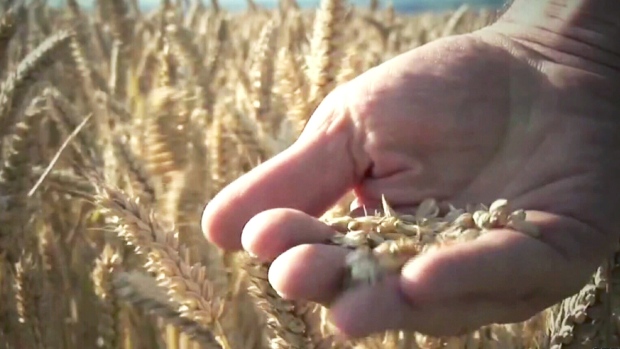 MONTREAL — Canadians have until Tuesday to comment on the federal government’s proposal to increase the amount of glyphosate herbicide residue allowed on certain grains and legumes, according to Health Canada’s website.

Glyphosate, commonly sold under the brand name Roundup, is frequently sprayed on crops in order to eliminate weeds and other yield-threatening plants.

But the herbicide may be linked to cancer and environmental harm — although the extent of these risks is inconclusive.

Under the proposed change in regulations, traces of glyphosate residue on food may be up to three times higher than the current maximum allows, depending on the food.

“It’s slightly shocking to see that Canada, in many product categories, actually wants to exceed what our trading partners are doing for maximum residue levels,” says Tia Loftsgard, executive director of the Canada Organic Trade Association.

The more that herbicide is sprayed, the more residue that may drift over to neighbouring crops — including organic ones, where foods are intentionally grown without the use of herbicides. Canadian organic foods may have trouble selling overseas as a result, says Loftsgard.

“That’s just not what the organic sector wants,” she says.

But according to some, use of pesticides and herbicides is often crucial in order for Canadian farms to manage risks and stay competitive.

Dr. Charlebois says that herbicides can be an excellent tool in the farmer’s tool belt to help them manage these risks — but only if used responsibly and according to regulations.

“The challenge, of course, with farms, is that often they overdo it,” he says. “And that really creates some issues related to health and the health of fields.”

The health risks of glyphosate have long been up for debate.

In 2015, an assessment from the International Agency for Research on Cancer found that glyphosate is “probably carcinogenic to humans,” but this conclusion was swiftly contradicted by later studies.

But some of said studies were called into question after it was revealed that Monsanto, the manufacturer of Roundup, reviewed some of the findings before publication, even editing some of the passages. Monsanto has also been accused of ghostwriting the studies, although it denies these allegations.

Some of these studies were used in the Canadian government’s 2017 re-evaluation of glyphosate use in the country, in which Health Canada concluded that the herbicide is safe for use. In light of recent revelations about Monsanto, however, the decision was met by controversy.

“There have […] been concerns raised publicly about the validity of some of the science around glyphosate in what is being referred to as the Monsanto Papers,” reads a 2019 statement on the Health Canada website.

In response to this pushback, Health Canada re-examined the validity of their data, stating, “after a thorough scientific review, we have concluded that the concerns raised by the objectors could not be scientifically supported when considering the entire body of relevant data. The objections raised did not create doubt or concern regarding the scientific basis for the 2017 re-evaluation decision for glyphosate. Therefore, the Department’s final decision will stand.”

While herbicides such as glyphosate may or may not come with health risks, they do have some ecological advantages.

Herbicides are frequently considered less-destructive alternatives to tilling, or “turning the earth,” which breaks up compacted soil and pulls weeds in preparation for new growth. This can cause soil degradation as a result, destroying the microbiome and consequently impairing the earth’s ability to fertilize itself.

Glyphosate appears to be gentler on the soil, eliminating weeds chemically rather than physically. But many argue it isn’t exactly a “green” product, either — traces of the substance have been detectable in both aquatic and terrestrial environments, and may have all kinds of understudied effects on the ecosystem.

To comment on the federal government’s proposal to increase the amount of glyphosate herbicide residue allowed on foods, Canadians should consult the Health Canada website before Tuesday.

“Health Canada will make the results of this consultation available on its website, as well as the decision on glyphosate as soon as it is finalized,” Health Canada told CTV.