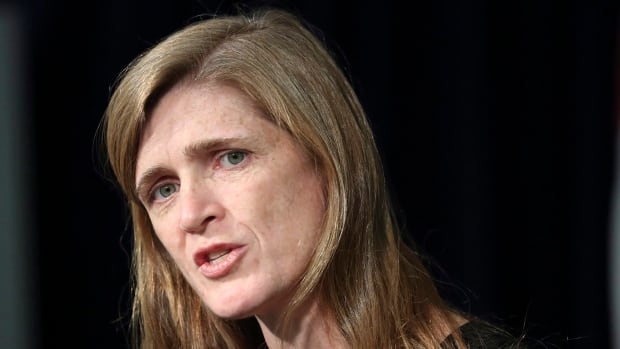 Investigating China and holding its authoritarian regime accountable for its actions early on in the COVID-19 pandemic is in Canada’s moral and strategic interests, former U.S. President Barack Obama’s top diplomat to the United Nations told CBC News.

“The whole world has an interest in getting to the bottom of what’s happened,” said Samantha Power in an interview Wednesday with CBC News Network’s Power & Politics. “It’s not just in Canada’s moral interest, and in keeping with Canada’s finest traditions, but also in its strategic interests.”

“If China feels great impunity at a time like this, having locked up scientists and those who were warning of this pandemic, having not been transparent with the outside world with such life-and-death consequences, imagine how President Xi and the Chinese regime will take that to the bank,” Power told host Vassy Kapelos.

One report says China waited six days to warn the public of a likely pandemic.

“This has been different versions of a cover-up from start to finish and yet it warrants investigation so that China can learn from this, given its role in the origins and the spread of the crisis,” said Power.

To counter the potential risks associated with being singled out by China, Power said, Canada could act in concert with other countries.

“There is still a … possibility of a coalition of the willing being mobilized, whether as a network external to international institutions or inside organizations like the UN,” said Power.

“I would find your friends. Act together, if it feels a little daunting to act alone, and there will be plenty who will jump with you because it is in all of our strategic interest for China to be held accountable.”

Earlier this month, a group of more than 100 experts, politicians and activists accused China of making the pandemic worse by withholding facts.

The group penned a letter calling Beijing’s pandemic response its own “Chernobyl moment” — comparing the regime’s actions to the Soviet Union’s failure to respond quickly to the 1986 Chornobyl nuclear disaster.

“We can’t act as enablers with respect to China’s human rights violations,” said former Liberal justice minister <a href=”https://twitter.com/IrwinCotler?ref_src=twsrc%5Etfw”>@IrwinCotler</a>. Cotler is calling for sanctions against Chinese officials who mistreated or silenced whistleblowers in the early days of the coronavirus outbreak. <a href=”https://t.co/VY3jb0F7Pr”>pic.twitter.com/VY3jb0F7Pr</a>

Canada has yet to call for an investigation into China’s actions.

Deputy Prime Minister Chrystia Freeland was asked Wednesday by Conservative MP John Williamson if the government will join Australia in calling for an investigation into the origins of the outbreak.

“When it comes to reporting on the coronavirus in countries around the world, it is absolutely the case that we all help our citizens and we help each other with candour and transparency and it’s also the case we need to work together,” said Freeland.

“Having said that, I think all members of this House will agree that a democracy will always be more transparent than any authoritarian regime.”

Earlier this month, former Liberal justice minister Irwin Cotler called for Canadian sanctions against Chinese officials who mistreated or silenced whistleblowers in the early days of the outbreak.

“We can’t act as enablers with respect to China’s human rights violations,” Cotler said in an interview with Power & Politics.

Former U.S. ambassador to the United Nations Samantha Power tells Power & Politics that China’s actions early on in the pandemic should ‘absolutely’ be investigated. 11:24